Pope Francis gave President Donald Trump a copy of his landmark 2015 encyclical on climate change when the two leaders met at the Vatican on Wednesday.

The climate encyclical — titled “Laudato Si” or “Praise Be to You” — called for strong action on climate change, which Pope Francis warned would disproportionately impact developing countries. His meeting with Trump on Wednesday comes as the White House considers whether the U.S. should leave the Paris Agreement on climate change.

Secretary of State Rex Tillerson said a Vatican official on Wednesday encouraged the U.S. to remain in the Paris Agreement, according to White House pool reports. Tillerson called the discussion a “good exchange.”

Senate Minority Leader Chuck Schumer, meanwhile, urged Trump to pay attention to the encyclical’s message. “If President Trump reads the Pope’s writings, I’m confident he’ll not withdraw the agreement,” Schumer said Wednesday. “We gotta get him to read it.”

Trump has proposed significant cuts to the Environmental Protection Agency and has begun to roll back environmental regulations implemented under former President Barack Obama.

“Regrettably, many efforts to seek concrete solutions to the environmental crisis have proved ineffective, not only because of powerful opposition but also because of a more general lack of interest,” Francis wrote in the 2015 encyclical. “Obstructionist attitudes, even on the part of believers, can range from denial of the problem to indifference, nonchalant resignation or blind confidence in technical solutions. We require a new and universal solidarity.”

Pope Francis gave Trump the encyclical along with a few other documents, including his 2017 World Day of Peace message, which he told Trump he had signed personally for him, according to White House pool reports. 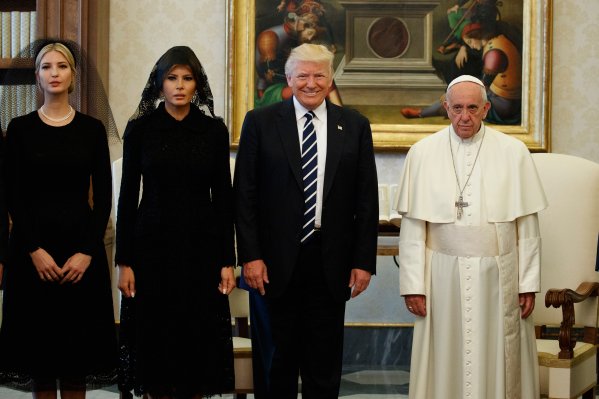 Why Melania and Ivanka Trump Covered Their Heads at the Vatican
Next Up: Editor's Pick