President Trump visited Israel’s Holocaust Museum and Memorial on Tuesday at the tail-end of his brief trip to the nation. During remarks at Yad Vashem, Trump called the Holocaust history’s “darkest hour.”

“It was the most savage crime against God and his children, and it is our solemn duty to remember, to mourn, to grieve and to honor every single life that was so cruelly and viciously taken,” Trump said.

The President and First Lady Melania Trump signed Yad Vashem’s guest book and left a short note about their time in the solemn space.

The note marked a contrast with that left by Trump’s predecessor, Barack Obama, who spent over an hour in the museum, as well as other top U.S. leaders who have visited the memorial.

Former Secretary of State Hillary Clinton visited Yad Vashem in 2009 during her first visit to the region in her role. Clinton left a lengthier note as well, writing:

When President George W. Bush visited in 2008. He too left a brief message, simply signing his name and “God Bless Israel,” during his visit.

A note reading, " God Bless Israel, George Bush" is seen on the Yad Vashem Holocaust memorial' guest book during a visit by US President George W. Bush in Jerusalem, 11 January 2008. Bush paid homage to Holocaust victims before a biblical tour today that will wrap up a Holy Land visit in which he urged Israelis and Palestinians to get serious about peace efforts. AFP PHOTO/POOL/JIM HOLLANDER (Photo credit should read JIM HOLLANDER/AFP/Getty Images)
JIM HOLLANDER—AFP/Getty Images

First Lady Laura Bush left a more eloquent note when she visited in 2005.

JERUSALEM - MAY 22: (ISRAEL OUT) U.S. first lady Laura Bush (R) signs the guestbook at the end of her visit to the Yad Vashem Holocaust Memorial with Gila Katzav (C), wife of Israeli president Moshe Katzav, May 22, 2005 in Jerusalem, Israel. Laura Bush is on a two-day visit to Israel and the Palestinian territories as part of her Middle East tour. (Photo by Uriel Sinai/Getty Images)
Uriel Sinai—Getty Images
Subscribe to TIME 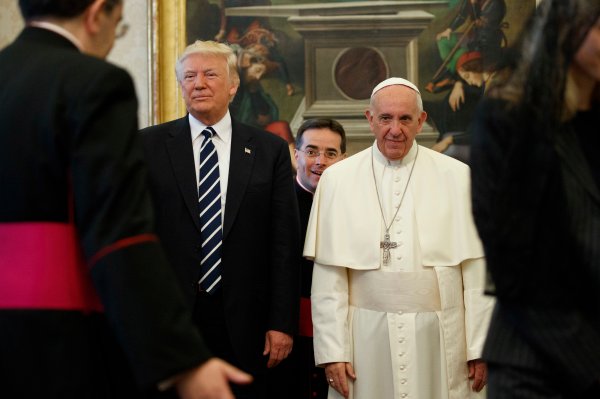 Trump Faces Polar Opposite in Meeting With Pope Francis
Next Up: Editor's Pick