Ethiopian Minister of Foreign Affairs Tedros Adhanom Ghebreyesus attends a press conference launching his candidacy to the post of Director General of the World Health Organization (WHO). Tedros won the election on Tuesday, May 23.
FABRICE COFFRINI—AFP/Getty Images
By Alexandra Sifferlin

On Tuesday, the World Health Organization (WHO) announced that Tedros Adhanom Ghebreyesus, a health expert from Ethiopia, was elected as the new director-general to lead the United Nations agency focused on international public health.

Tedros, who prefers to be called by his first name, will be taking over the position from Dr. Margaret Chan, who has been overseeing the agency since 2006. Tedros will serve a five-year term in the new position which will be begin on July 1. He will be the first health official from Africa to serve as director-general.

In a speech before the election—part of a weeklong meeting of health ministers from 194 nations in Geneva—Tedros talked about growing up in Ethiopia, saying he comes from a background of “knowing survival cannot be taken for granted, and refusing to accept that people should die because they are poor.” Tedros also spoke about the need for universal access to health care, a better response to health emergencies and the need to tackle gender-based violence, as well as threats to global health like climate change, the migrant crisis and terrorism.

The two other candidates were Britain’s Dr. David Nabarro, a health official who has lead the United Nations response to a variety of health problems, including the 2014 Ebola outbreak, and Dr. Sania Nishtar, the first female cardiologist in Pakistan.

Tedros is a former health and foreign affairs minister from Ethiopia. As a foreign affairs minister Tedros focused on accelerating Africa’s economic, political and social development. According to his director-general application, as health minister, he oversaw the creation of 3,500 health centers and 16,000 health posts, which contributed to considerably cutting child mortality rates, HIV infections, malaria deaths and deaths from tuberculosis.

“I envision a world where everyone can lead healthy and productive lives, regardless of who they are or where they live,” Tedros wrote in his WHO application. “Achieving this will require a stronger and reformed WHO that belongs to all of us equally, and that is efficiently managed, adequately resourced and results-driven—with a strong focus on transparency, accountability and value for money.”

The WHO election comes at a difficult time in public and global health. The WHO’s reputation suffered due to its response to the Ebola outbreak that started in 2014. Critics argued the organization was too slow in responding to the outbreak, which infected more than 28,000 people in Liberia, Sierra Leone and Guinea, and killed more than 11,000. Just a couple years after the start of the epidemic, the Zika virus swept through South America and beyond, resulting in thousands of cases of the severe birth defect microcephaly among infants.

As TIME recently reported, the organization is not yet ready to take on another epidemic of similar proportions. The organization has an annual budget of about $2.2 billion, which is less than major hospitals, the New York Times reports. Thirty percent of that budget comes from United Nation dues, and the rest comes from donated funds.

MORE: The World Is Not Ready for the Next Pandemic

“Tedros is an excellent choice to lead WHO,” said Dr. Tom Frieden, the former director of the Centers for Disease Control and Prevention (CDC) in an email sent to TIME. “He succeeded in Ethiopia, making remarkable health progress by rapidly reforming a sclerotic bureaucracy and implementing effective community-based services. Precisely the same thing is needed to make WHO effective providing technical guidance and improving support to countries. Governments and organizations around the world should support WHO to become more effective—doing so is in all of our best interest.”

Yet the campaign was not without controversy. A informal advisor for rival candidate David Nabarro accused of covering up three cholera epidemics in his country of Ethiopia, where he served as health minister. Lawrence Gostin, the director of the O’Neill Institute for National and Global Health Law at Georgetown University, told the New York Times: “Dr. Tedros is a compassionate and highly competent public health official, but he had a duty to speak truth to power and to honestly identify and report verified cholera outbreaks over an extended period.” Tedros denies the allegation and told the Times that Nabarro’s supporters have a “typical colonial mind-set aimed at winning at any cost and discrediting a candidate from a developing country.”

Frieden wrote an opinion letter to the Times defending Tedros. “Although not optimal, many countries report cholera to the World Health Organization as acute watery diarrhea, as Ethiopia has,” he wrote. “This allows reporting and response without laboratory confirmation, but in no way indicates that Tedros Adhanom Ghebreyesus, a former health minister of Ethiopia, is any less qualified to become director general of the W.H.O.” 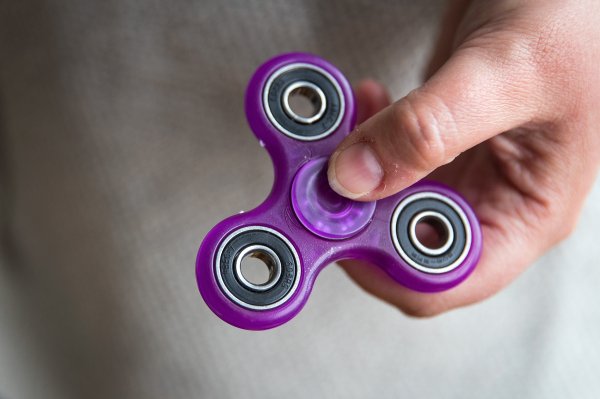 After a Fidget Spinner Sent Her Daughter to the Hospital, Mom’s PSA Is Going Viral
Next Up: Editor's Pick