Ariana Grande Attack Aftermath: How Vulnerable Is the U.K. to Extremism?

At least 22 people have been killed and around 59 injured after a suicide bomb attack at Monday night’s Ariana Grande concert at the Manchester Arena, a 21,000 capacity concert venue in the U.K.’s third most populous city.

Greater Manchester Police chief constable Ian Hopkins said police believe the attacker was a lone wolf who died at the scene, although they are trying to establish if the attacker was part of a network. No organization has yet claimed responsibility or involvement in the atrocity, but there are good reasons to fear the operations of terror groups, and self-radicalized, religiously inspired lone wolves in the U.K.

1. Approximately 850 Britons have joined jihadist organizations in Syria and Iraq

In August 2014 British Prime Minister Theresa May, who was at the time Home Secretary, raised the U.K’s terror threat level to ‘severe’ meaning that an attack was highly likely. The severe threat level—one below ‘critical’, which signifies an imminent attack—was raised in response to warnings of threats posed by British jihadists returning from fighting in Syria and Iraq.

British intelligence agencies estimate that approximately 850 people from the U.K. travelled to Syria and Iraq to fight for or support jihadist organizations there. As of February this year about half had returned, the BBC reports. By March, security officials said they were preparing for the return of hundreds more fighters as ISIS loses territory. The group’s stronghold cities of Mosul in Iraq and Raqqa in Northern Syria are both expected to fall this summer.

“It is possible they are going to return indoctrinated, deeply dangerous and damaged,” one government source told The Guardian.

2. Terrorists have attempted to attack Manchester before

In November 2015, a New York City judge jailed Pakistan national Abid Naseer for 40 years after he was convicted of plotting mass suicide bomb attacks in Manchester in 2009.

Naseer, 29—who was extradited to the U.S. for trial—was arrested after intelligence services intercepted communications that suggested he was two days away from carrying out an attack at Manchester’s Arndale shopping center on a busy Easter weekend, the Manchester Evening News reports.

The plot involved a car bomb attack next to the shopping center, with subsequent suicide bombings at separate locations targeting those fleeing the initial blast. Nine other Pakistani nationals in the U.K. cities of Liverpool and Manchester were arrested along with Naseer.

Britain’s most senior counter terrorism officer Mark Rowley said in March this year that the U.K. had thwarted 13 terror attacks since the murder of Lee Rigby, a solider hacked to death on the streets of southeast London in 2013. Some of those attacks, Rowley said, would have been on the scale of those carried out in Paris in 2015 and Brussels in 2016.

While U.K. intelligence services have a strong record of anticipating terrorist attacks—garnered in part through experience dealing with the Irish Republican Army (IRA) during the 1970s to 1990s—some are always expected to slip the net. Former Metropolitan Police Commissioner Sir Bernard Hogan-Howe wrote in August last year that it was a question “of when not if” an attack in Britain would occur.

This March, Britain Khalid Masood drove a car into pedestrians near the U.K. Parliament before stabbing a police officer in an attack that left five people dead, including himself. Last month, another attack near Parliament was thwarted after armed police swooped on a man carrying knives.

If confirmed as a terrorist attack, Monday night’s bombing would be the deadliest in Britain since four suicide bombers killed 52 people in coordinated attacks on London’s transport system in July 2005. 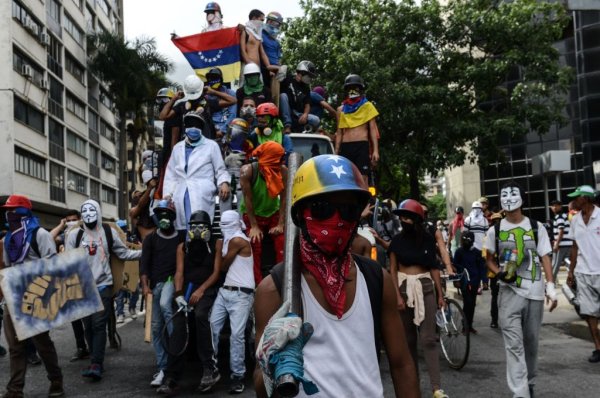 The Death Toll in Venezuela's Unrest Has Hit 51
Next Up: Editor's Pick