Daenerys’ dragons are all grown up. Entertainment Weekly released new photos on Monday to tease the seventh season of Game of Thrones, set to premiere July 16 on HBO. One of the most intriguing pictures shows the Mother of Dragons riding one of her “children,” who appears to have done some heavy damage to the burning ruins behind him.

The show creators have revealed little about the upcoming season: A teaser trailer showed Jon Snow, Daenerys and Cersei all walking to their respective thrones. Cersei then let out a breath of cold air, suggesting that her storyline is somehow related to that of the White Walkers. The new photo of Daenerys on her dragon suggests that the show may finally getting closer to showing ice and fire actually clash.

Another photo appears shows Arya Stark in more traditional Northern garb — signalling this season may have a Stark family reunion.

The seventh and final season of Thrones will be split into two truncated seasons that air over the course of the summer of 2017 and 2018. HBO has already announced that four spinoffs are in the works mining stories from different time periods in the history of the Seven Kingdoms.

You can check out all the new photos at Entertainment Weekly. 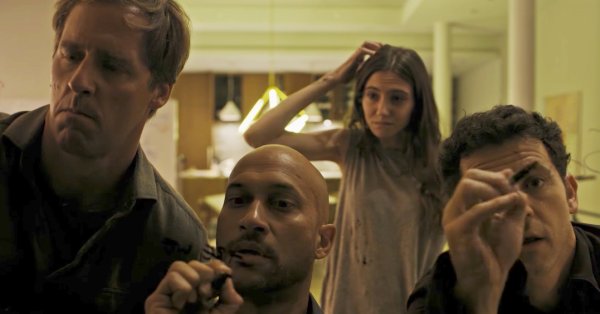 Keegan-Michael Key Can't Seem to Grow Up in Netflix's Friends From College Trailer
Next Up: Editor's Pick