President Trump’s proposed budget includes billions of dollars in reductions to social service programs over the next decade, including one that has received a lot of attention: Social Security Disability Insurance.

The long-standing program, designed primarily to protect workers who become injured or disabled, currently serves nearly 9 million American workers, generally between the ages of 18 and 64, as well as almost 2 million of their dependents. Known in the jargon of Washington as SSDI, the program would bear a large share of the overall cuts, with roughly $70 billion slashed from its budget over the next 10 years.

According to TIME’s analysis of federal data, the 10.8 million disabled workers and their dependents who benefit from SSDI are disproportionately likely to live in places with higher rates of injury from manual labor, including rural areas, places with agricultural production, and the Rust Belt. All are regions that largely supported Trump in 2016.

For the sake of comparison, about 45% of Americans live in a county that voted for Trump. (While the Republican won a heavy majority of the counties in the U.S., most of them have small populations.) But 54% of disabled workers and their dependents live in such counties.

While these figures capture a large portion of Americans who benefit from federal disability aid, the SSDI also benefits some disabled adult children, as well as widows or widowers of workers. A separate program exists to aid low-income families with disabilities, to which the Trump budget also proposes cuts. Experts say there are also many disabled people who neither apply for, nor receive aid from, either program.

Critics argue that the Trump administration’s proposal to slash SSDI breaks one of the president’s core campaign promises not to cut Social Security. Administration officials have defended the move by explaining that SSDI is not a “core” part of Social Security.

SSDI is indeed a different program than the Social Security retirement benefit that most Americans think of when they hear the term. SSDI, which was established in 1956, predates Social Security by 18 years and draws from payroll contributions rather than a direct federal allocation of funds. Both programs are administered by the Social Security Administration.

SSDI became a political lightning rod in recent years as the number of recipients claiming disability shot up. Between 1996 and 2015, the number of Americans on the SSDI roles jumped from 7.7 million to 13 million, according to federal data. The program now costs the government roughly $192 billion per year.

Republicans argue the uptick is an indication of either rampant fraud and abuse or an epidemic of over-dependence on the government. It’s a narrative that has been backed by a recent spate of features not only in conservative media outlets but also mainstream venues, like the Washington Post and National Public Radio.

Democrats, meanwhile, argue that the increase can be nearly entirely explained by demographic shifts over the last 30 years. Take the Baby Boomers, for example. That enormous generation, born between 1946 and 1964, all entered their 50s and 60s during the last two decades. Since disability claims correlate closely with age, it makes sense that an older workforce would rack up more injuries. A 50-year-old is twice as likely to receive disability than a 40-year-old, and a 60-year-old is twice as likely as a 50-year-old to do so, according to a 2014 report by the Center on Budget and Policy Priorities (CBBP).

Another major demographic shift is the influx of women joining the workforce over the past 30 years. That’s increased the number of people who are eligible for the program in the first place. (You only qualify for SSDI if you’ve held a traditional job for a certain number of years, so women who only worked out of the home weren’t eligible.) From 1956, when SSDI was first established by law, to 2015, the number of women in the traditional workforce, and therefore eligible for SSDI, increased 243%.

In addition, the total U.S. population has increased rapidly over the last few decades, too. Between 1980 and 2013, the number of “working age” Americans, usually defined as people between 20 and 64, spiked 43%, according to the CBPP report. So while the raw number of Americans receiving disability benefits has increased steeply, the percentage of Americans receiving such benefits has climbed much less sharply.

There also are other factors. A 1983 law that gradually increased the retirement age from 65 to 66 put a bigger burden on SSDI roles, since it delayed workers’ shift from that program to Social Security retirement benefits.

A 2014 white paper by the Congressional Research Service noted that while demographic changes account for much of the rise in SSDI enrollment over the past 20 years, researchers don’t agree on a cause for the remaining increase. Some blame “changes in opportunities for work and compensation,” shifts in the SSDI program’s eligibility criteria, or inconsistencies in how the program determined disabilities, the report said.

Either way, Trump’s proposal to cut the program presages a political showdown for his fledgling administration. The budget may thrill Trump’s traditional conservative base, which has long been committed to slashing federal benefits. But it does so by slashing benefits to a disproportionate number of Americans who live in thecounties that pushed the president to power. 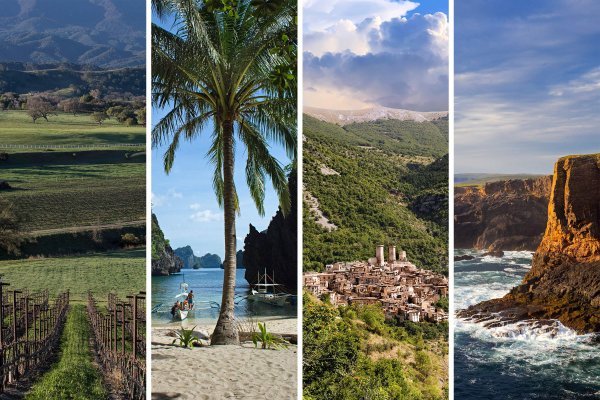 Thinking of Visiting a Popular Tourist Destination? Try These More Affordable Alternatives Instead
Next Up: Editor's Pick