A History of Hunger Lies Beneath Italy's Food Culture

Detail of a painting in the Crypt of the Original Sin, in Basilicata, Matera, Italy.
Mondadori Portfolio / Getty Images
By Helene Stapinski

I first saw the cave wall in the Crypt of the Original Sin in my family province of Matera, in Southern Italy, in the Fall of 2014. The faces of the angels and Adam and Eve, painted in the 9th century by Byzantine monks, looked strangely familiar. They resembled my family.

And then there was the subject matter: Stealing food.

I had grown up in Jersey City, N.J., where swiping food was a birthright. My father worked as a warehouse checker at a cold-storage company near the mouth of the Holland Tunnel, where shrimp, lobster and steak regularly fell off the truck and into our freezer at home. My grandfather had gotten his nickname, Beansie, by stealing a crate of beans as a hungry kid.

We even had a story in my family about relatives back in Southern Italy so desperate they stole pears from a farm in beautiful Basilicata, not unlike Adam and Eve stealing that apple in the lush Garden of Eden.

I stared at the cave wall. That story of original sin involved what was likely the first crime committed in most societies. Stealing fruit was not a metaphor but probably the first sin for most people on Earth.

Before greed, there was hunger. And before possessions, there was fruit. Stealing from your neighbor’s harvest.

The concept of original sin, developed by St. Augustine in the fourth century, came to him after he and his friends stole pears from a neighbor’s farm. Just like my ancestors. The only difference was that Augustine was well fed. He threw the pears to the hogs, which led him to wonder, ‘Why on earth did I steal those pears? And why does man sin?’

I knew why my family did.

Over the past decade, I made four trips to Basilicata, to the instep of Italy’s boot, to research my first family crime from the 19th century. In the process, I discovered a history of poverty and subjugation so long and intense it eventually drove nine million people from their homes.

But how could a place so fertile and land so abundant leave so many so hungry?

The problems started long before the 1800s. For centuries, a long line of malicious invaders — the Romans, Lombards, Normans, Aragonese and Bourbon kings — left a desperate, conquered people in their wake. Italy’s unification promised a better life, but left the peasants in worse shape than before. Padroni (landowners) simply replaced cruel monarchs.

My family — and all the families save for the padroni and a lucky few — were left starving in the 1800s under the feudal farming system. The peasants, who had been heavily taxed by different rulers for centuries, were subject to further taxes — including a grist tax, which was a highly unpopular tax for simply grinding your wheat for your bread — to help pay for the country’s changes and improvements, though few of those improvements made their way to the south. In addition, the tariffs needed to boost northern industry wound up hurting the small farmers in the south.

This was why some of them stole and why they eventually left Italy, despite the incredible beauty of the landscape, whose bounty was not meant for them, but for the landowners who made up just 1.4% of the population.

My great-great-grandmother Vita, before she escaped to Jersey City from the town of Bernalda in 1892, made bread in the communal oven using scraps of wheat her husband was paid, stretching it with chestnuts, corn or even sawdust to barely feed the whole family. There was meat twice a year, on Christmas and Easter. And never any seafood, because of the pirates and malaria that kept most people away from the coast.

This wasn’t only about my family tradition of stealing. Ironically, the rich Italian food culture stemmed from a deep hunger, passed down through the generations and barely satiable even today.

Centuries of depravation explained why people in Basilicata these days served 13 different fishes on Christmas Eve, not just the usual seven. It explained why my family served not one, but two different kinds of ham on Easter Sunday. Food was abundant now for most families, and had been since the 1970s, when true land reform in the region finally started to take hold.

My meals during my visits to Basilicata stood in stark contrast to the history of hunger I uncovered. At first there were the long meals in the cave restaurants. Honeycombed Matera bread. Creamy fresh ricotta. Grilled lamb, perfect pizzas, pasta with ceci beans, pasta with rabe, pasta with cruscho peppers.

I bought my local produce — squash blossoms and arugula — from the worn steps of the farmers’ stone houses in town. Sopressata and caciocavallo were sold from a white van that made its rounds every few days, its driver announcing his arrival in the rione through a loud speaker at 7 am. I would get in line with the old women in the neighborhood — the anziane — with their cloth bags dangling from their thick arms.

One friend, Giuseppe, could barely keep his apricot and wheat farm running some seasons. Farming was, still, hard and not very lucrative, save for the temporary bounty it produced. But there were no more invaders and no more padroni to steal the food from your mouth. Your harvest was your own — to eat, and to share with those around you.

We had a meal one night, which ended, as most southern Italian meals do, with fruit. There were Giuseppe’s soft, newly harvested apricots, baked figs and the same type of sweet, small pears stolen by my relatives over a century ago, their hunger forgotten for a fleeting moment.

Helene Stapinski is the author of the new book Murder In Matera: A True Story of Passion, Family, and Forgiveness in Southern Italy. 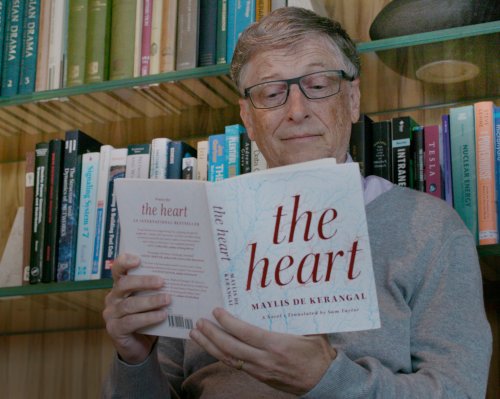 Bill Gates Discusses His Lifelong Love for Books and Reading
Next Up: Editor's Pick