Robert Lowell — who was “by rare critical consensus, the best American poet of his generation” — served as the face of an examination of the state of American poetry. And the state of that art, TIME noted, was strong:

But the poetry that flourished in 1967 was not the same poetry that had done so in the past. Lowell explained that the idea of poetry that provided “edification or moral uplift” was basically done for, as were many formal constraints. Now, poets and those who appreciated poetry wanted something that captured a feeling, confessed the poet’s inner mind or created something entirely new.

Read more: 30 Portraits of Poets From the LIFE Archives

It was easy to see that people like the beat poets (of whom “only Allen Ginsberg retains any influence”) had helped take poetry mainstream, but the poet Elizabeth Bishop had another theory for why the poetry craze had arrived, and with it so many new voices: if the world in which we live is “horrible and terrifying,” the best allegory for that world can be found in the most terrifying moments our our lives — which are best expressed through poetry.

Another war brewing: Though the War in Vietnam had been the conflict uppermost in Americans’ minds for years, now the eyes of the nation turned toward the Middle East, as it seemed that Israel and its Arab neighbors were on the verge of conflict. Egypt had sealed the Gulf of Aqaba to Israeli shipping, which the U.S. considered “an act of aggression” — so much so that many people worried that the U.S. would soon have two wars of intervention on its hands, though this one had the support of many in Washington who were against the war in Vietnam. Egypt, however, seemed not to truly want to go to war, so the world watched and waited to see who would back down. (Also: here’s a very helpful map of the region.)

North Korean consequences: This world news story about North Korea concisely explains one of the (still timely) issues with that nation’s political and military system: military spending was so disproportionately high that it was crippling the North Korean economy, creating a morale problem to which Kim Il Sung’s regime responded by increasing their show of military might, which in turn cost more money.

New moon: This week in “discoveries you probably thought didn’t need to be discovered,” NASA announced that the moon was “basically all grey.” While that fact might have seemed obvious from Earth, it wasn’t until the existence of the very first color photographs beamed back from the moon that humankind could really be sure.

Criminal case: Just as felony disenfranchisement can make headlines today, legal experts in the 1960s were taking a hard look at whether taking away someone’s voting rights was an appropriate part of the punishment for a felony conviction.

Great vintage ad: The “space-age student” was the target audience for this new encyclopedia.

Coming up next week: More on Israel 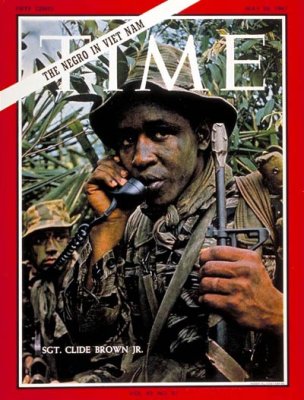 50 Years Ago This Week: Vietnam and the Black Soldier
Next Up: Editor's Pick