Indonesian police guard men arrested in a recent raid during a press conference at a police station in Jakarta on May 22, 2017.
Fernando—AFP/Getty Images
By Tara John

Indonesian authorities have arrested 141 men at a sauna in Jakarta for allegedly taking part in a gay sex party. It is the latest crackdown on homosexuality, which is not illegal in the country (except for in Aceh Province), but has routinely been the target of police raids and vigilantes.

Authorities raided the party, which was being promoted as “The Wild One,” at a sauna and gym venue on Sunday evening, the Guardian reports. Police said the attendees, which include a British national and Singaporean, paid $14 dollars to attend the event, BBC reports.

A police spokesman said the men could be charged under the country’s harsh anti-pornography laws, which are used to punish a broad range of sexual behavior. The arrests come after two men were sentenced to be publicly flogged in the conservative Aceh Province. In April, about 14 men were arrested during a gathering at a hotel and were forced to undergo HIV tests.

While the predominately Muslim country is a secular state, strong religious and social taboos against homosexuality have prompted the LGBT community to shy away from the public eye. 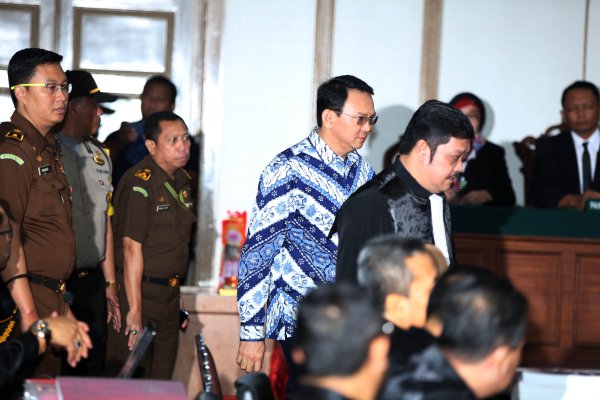 Top Christian Official Jailed in Indonesia for Blasphemy
Next Up: Editor's Pick