Was the Bangkok Hospital Bombing a Rare Glimpse of Turmoil Within Thailand's Military Regime?

Police investigators work the lobby of Phramongkutklao Hospital, a military-owned hospital that is also open to civilians, in Bangkok after a bomb wounded more than 20 people, on May 22, 2017.
Sakchai Lalit—AP
By Feliz Solomon / Bangkok

A small bomb shook the center of an army-linked hospital in the Thai capital Bangkok Monday, injuring 25 people. Some experts have been left wondering if the attack, which took place on the third anniversary of 2014’s military coup, could be a rare sign of tensions within the junta.

Army chief Chalermchai Sittisart said in a televised interview that the explosion was likely carried out by “people opposed to the junta.” No one has yet claimed responsibility for the attack, but Chalermchai said he believed the bombing was connected to two previous explosions in the capital that occurred in April and mid-May, the Bangkok Post reports. Significantly, officials are not attributing the blast to the armed insurgency in the country’s deep south.

“Clearly what happened yesterday required some inside intelligence,” Anthony Davis, a Bangkok-based security consultant and former analyst for the defense publisher IHS Jane’s, tells TIME. “That’s one factor that argues powerfully against suggestions the southern insurgents were involved. Somebody knew the specifics of that military hospital.”

No one was killed in Monday’s blast, but a few injured patients lay on cots in Phramongkutklao Hospital, also known as King Mongkut Hospital, waiting to be treated for cuts caused by shards of glass hurled by the explosion. A handful of police and soldiers in uniform milled about the facility a few hours after the incident, while nurses came and went apparently unfazed.

Read More: Thais Face an Anxious Wait to See How Their New King Will Wield His Power

According to Davis, the blast is likely a “flash in the pan” timed to achieve maximum traction on the politically sensitive anniversary of the coup, which also follows days after the date marking a violent 2010 crackdown on opponents of the establishment known as the Red Shirts.

But Paul Chambers, an expert on Thai politics at Naresuan University in the northern city of Phitsanulok, tells TIME that the hospital bombing could be a sign of intensifying infighting. He says that the only people capable of this type of attack would be “those with bombing experience, which points to elements in Thailand’s security forces.” Factions of the army that have been sidelined, and possibly some members of the police force, appear ever more at odds toward the junta as it entrenches its grip on power and frustrates their own ambitions, according to Chambers.

The 2014 coup was the latest of 13 successful military takeovers in Thailand over the past nine decades, and the army appears to be tightening its grip in the wake of last year’s death of King Bhumibol Adulyadej, who held the throne for 70 years. The junta, led by former general Prayuth Chan Ocha, moved quickly to secure his successor’s sign-off on a new constitution that essentially grants the army veto power over political issues. The new charter, approved by a referendum in August last year and endorsed by the new King Vajiralongkorn in April, gives the military the right to bypass the legislature with emergency decrees. Unprecedented measures to stifle expression and weaken political parties have been implemented under the current regime, and increased instability could offer new cover for the junta to tighten its control.

Elections are slated to be held next year, though no date has been set. Thailand has long been ensnared in a cycle of elected populist governments overthrown by the army, though the turmoil could worsen in the years to come.

“I think that tensions will escalate as groups of civilians begin to support the bombings,” Chambers tells TIME, suggesting that the broader population could also be losing patience with the current hard-line leadership as Thais face economic and social pressures caused by fundamental and long-standing divisions. “These bombings reflect that Thailand is entering a period of much enhanced political instability that the junta leaders might rationalize to extend their power.”

—With reporting by Helen Regan / Bangkok 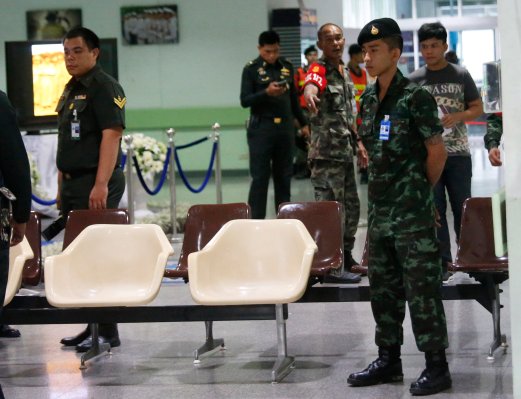 About 20 Hurt in Bomb Attack at Bangkok Hospital
Next Up: Editor's Pick