The women who accompanied President Trump on his trip to Saudi Arabia appeared to insult the host country — according to one of Trump’s old tweets.

Melania and Ivanka Trump deboarded Air Force One Saturday in the capital city of Riyadh wearing long, flowing sleeves, but no headscarves, which local women are required to do in the conservative country. While Saudi Arabia King Salman appeared happy to greet the visitors, a Trump tweet from 2015 suggested he would be offended.

“Many people are saying it was wonderful that Mrs. Obama refused to wear a scarf in Saudi Arabia, but they were insulted,” Trump tweeted at the time.

Trump was referencing President Barack and Michelle Obama’s trip to Riyadh in January 2015 in which the First Lady chose to forgo a headscarf.

It’s likely the hosts weren’t offended in either case, however. While Western women are expected to cover their arms and legs during visits, headscarves are typically not required. Along with Obama, German Chancellor Angela Merkel and former Secretary of State Hillary Clinton have opted to forgo headscarves during official trips in the past.

Trump is in Saudi Arabia to give a speech on radical Islam to several leaders of Muslim countries, marking the President’s first foreign trip since taking office in January. 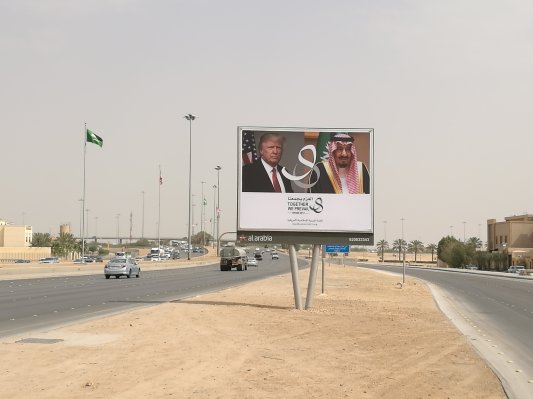 In Riyadh, Saudis Are Hopeful Donald Trump's Visit Can Reboot U.S. Relations
Next Up: Editor's Pick