Tom Hardy will star as yet another supervillain. Sony Pictures announced on Twitter Friday that the actor who played the mumbling menace Bane in The Dark Knight Rises will portray Spider-Man adversary Eddie Brock, a.k.a. Venom, in the Venom movie, set to release Oct. 5, 2018.

Zombieland director Ruben Fleischer is in talks to helm the film, according to The Hollywood Reporter. The Spider-Man spinoff will kick off a series of Sony films based on characters the Spider-Man universe. The studio is reportedly also developing a Silver Sable and Black Cat project.

Those who gritted their teeth through Spider-Man 3 starring an emo Tobey Maguire may remember Venom and Eddie Brock, played in that movie by Topher Grace. Venom is not so much a person as a thing, an evil alien symbiote that needs a human host in order to survive. In the comics, Venom has infected many and imbued them with Spider-Man-like powers. In Spider-Man 3, Grace’s Eddie Brock was an envious rival to Peter Parker who, after being infected, donned a black suit and sported shark-like teeth.

Sony has talked about making Venom spinoff ever since Spider-Man 3 premiered in 2007. But the film stalled after Sony rebooted the Spider-Man series with Andrew Garfield as the web-slinger in 2012. The two Amazing Spider-Man films underperformed critically and commercially. In an attempt to revitalize the character, Sony struck a deal with Marvel Studios to collaborate on a new Spider-Man movie.

MORE: Venom: What to Know About the Spider-Man Spinoff

Marvel sold the film rights to its most famous properties, Spider-Man and The X-Men, in the 1990s when it was struggling. In the 2000s Marvel Studios (owned by Disney) didn’t have access to those characters and had to build a film franchise from lesser-known properties like Iron Man and Guardians of the Galaxy. Marvel has been the most successful superhero studio, but head Kevin Feige was eager to pull the snarky Spidey into the Avengers team.

In exchange for the rights to use Spider-Man in various Marvel ensemble films (last year’s Captain America: Civil War and next year’s Avengers: Infinity War), Marvel agreed to work with Sony with this summer’s Spider-Man: Homecoming, starring Tom Holland. The new film will do away with Peter Parker’s backstory — so you won’t have to watch Uncle Ben die again — in favor of a John Hughes-type high school film, but with superpowers. Robert Downey Jr. will also appear in the film as Iron Man.

But Venom likely will have no connection with the rest of the Marvel Cinematic Universe, including Spider-Man: Homecoming. Sony has not said how Spider-Man will be folded into the Venom movie, if at all. But Homecoming director Jon Watts told reporters that Homecoming and Venom have no connection. There’s a chance that Tom Holland’s Spider-Man won’t show up in the Venom franchise at all. The casting seems to confirm this theory: the brooding Hardy isn’t exactly a doppleganger for the 20-year-old; cheery Holland. 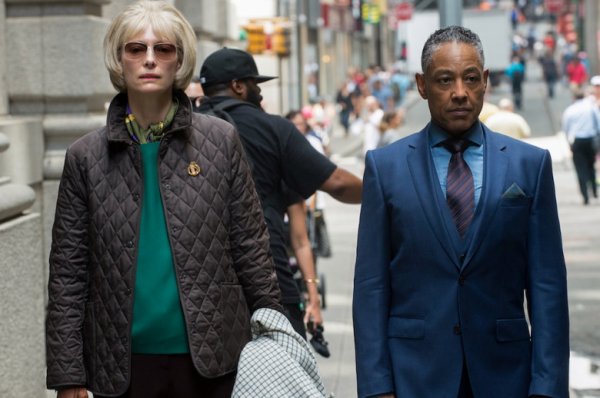 Okja: A Super-Cute Super-Pig Made to Suffer Supremely
Next Up: Editor's Pick