The Rock Talked to Jimmy Fallon About a Potential Presidential Run: 'We’ll See'

It looks like there’s a chance Dwayne “The Rock” Johnson might want to join Ronald Reagan and Donald Trump in making the trek from the silver screen to the White House.

Last year, Johnson told British GQ that there was “a real possibility” he would run for president, a possibility the Baywatch star recently echoed.

When he stopped by The Tonight Show on Thursday, he confirmed his interest, telling Jimmy Fallon that when it comes to making those comments into an actual campaign, “We’ll see.”

Johnson – who has an an above-average Q score (approval ratings for celebrities) – cited a poll testing potential candidates against Trump in 2020.

“I would beat Donald Trump if we had an election today,” Johnson said. Fallon wasn’t surprised by the news, and interviewed the Rock like a typical celebrity, interrupting him to agree: “Absolutely!”

It bears mentioning that although he beat Trump – whose approval rating just hit a new low – by five percentage points, several Democrats like Vice President Joe Biden, Sen. Elizabeth Warren, Cory Booker, Bernie Sanders and Al Franken fared better than The Rock, according to the poll.

Still Johnson says that he has “been blown away” by all the attention his remarks have received. “It’s so flattering,” he says. “And I think you have to question why. I think it’s because, you know, a lot of people want to see a different leadership today — I’m sorry, not different, but better leadership today, right?”

Johnson however recognizes that a lot can can change over the course of the remaining time in Trump’s presidential term. “Three and a half years is a long ways away,” says Johnson. “So we’ll see.” 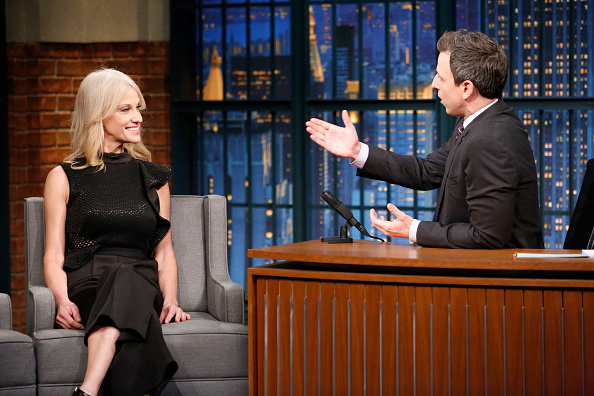 Seth Meyers on His Simple Trick for Interviewing Kellyanne Conway
Next Up: Editor's Pick