A TV Show About 'El Chapo' Guzman Is a Univision Hit, and It's Coming to Netflix

Mexican actor Marco de la O plays drug trafficker Joaquin Guzman during the filming of "El Chapo" in Tabio, Colombia on March, 21, 2017. The life of the Mexican drug kingpin is being brought to television screens in a drama co-produced by Netflix and Univision
Fernando Vergara—AP
By Ioan Grillo / Mexico City

On May 5, Mexico’s most infamous drug trafficker sat in a blue jailhouse overall in a New York court, his beauty queen wife waving from the public seats.

Presiding Judge Brian Cogan faced Joaquin “El Chapo” Guzman and ruled that the 60-year-old would stand trial in April 2018 for allegedly smuggling billions of dollars worth of narcotics to American users. The proposed date prompted Guzman’s lawyers to laugh and protest that it would take much longer to prepare for such a landmark case, which stretches back decades and involves multiple prison escapes, cross-border smuggling tunnels and bloodshed.

But well before this daunting drug drama will be played out in the courts, it’s being broadcast to millions of viewers on the small screen. The series El Chapo, recreating Guzman’s skullduggery since the 1980s, reaches the finale of its first season on Sunday on Spanish-language broadcaster Univision — after which its co-producer Netflix will offer it to a global audience, beginning in June.

Adding to the close running of fact and fantasy, the series mixes real news footage of Guzman’s arrests and escapes along with a dramatization of events, in which the drug lord is played by Mexican actor Marco de la O. The series has brought in healthy audiences so far, with Univision confirming on Wednesday that it will be renewed for a second season.

Despite its popularity, the mere existence of the series has been controversial in Mexico. Politicians there have long railed against songs, movies or telenovelas glorifying the gangsters, who continue to pile up mountains of corpses — the first three months of this year were among Mexico’s most violent in recent history with more than 5,700 homicides. But while other fictional portrayals of mobsters have followed those long out the business (Netflix’s Narcos covered Pablo Escobar, who was shot dead in 1993), Guzman was only extradited to the United States in January, and several of his family members are alleged to be major players in the ongoing turf wars inside his so-called Sinaloa Cartel.

Furthermore, when a trailer first appeared for the series, a lawyer for Guzman said the producers should pay the drug lord for rights to make his biopic. “He is alive. He has to grant them permission,” Andrés Granados told a Mexican radio station last year. Meanwhile, Mexican soap star Kate del Castillo has said Guzman granted her exclusive rights to tell his story and plans to make her own film about him. Del Castillo along with actor Sean Penn met with Guzman in the mountains in 2015 following his second prison escape.

However, El Chapo series creator Silvana Aguirre argues her version is neither a straight biopic of the kingpin nor a glorification of his lifestyle. Instead, she tells TIME, it is a study of the international drug trade, which demands better public understanding. “It covers the issue of drug trafficking with a more macro vision: drug trafficking as a business, the systematic corruption in Mexico, and even in the United States, which allows the emergence of characters like the protagonist,” Aguirre said. Working with a team including one of Mexico’s foremost journalists on the drug war, she says it aims to be as factual as possible. “We didn’t want to make a narco soap opera, with emphasis on the romantic parts.”

The team never talked to directly to Guzman, Aguirre says, instead basing the plot on journalistic investigations. It also has a dose of fantasy to fill in the gaps, imagining the very moments he meets with his mentor, an older trafficker, or bribes politicians and American agents.

Filming in Mexico, where thousands of Sinaloa Cartel gunmen still lurk, was risky. Instead, they filmed in Colombia, where they found locations with little development to give it a 1980s feel. “The choice of Colombia was a combination of a creative decision and also a decision of the company for security reasons,” Aguirre said.

The series is certainly closer to reality than various telenovelas about Mexican mobsters, such as The Queen of the South or The Lord of the Skies. Starting in the 1980s, El Chapo shows how trafficking was organized top down by the Mexican government, during a time when one party held the presidency for seven straight decades. This view is widely accepted by journalists and academics who study the trade. More controversially, it portrays American agents taking bribes and imposing their own preferred traffickers as top dogs.

Within these struggles, Guzman is shown rising through the ranks, outplaying his rivals with brains and bullets. Actor De la O is convincing as the drug lord, who went from selling oranges as a kid to joining the pantheon of the most notorious gangsters of modern times, alongside the likes of Escobar and Al Capone. But the series seems to struggle to find the right tone, caught between stripping the glamor from his rise, while shying away from portraying a still-living person as a genuine monster. “We don’t want to make an aspirational series for anybody,” De la O tells TIME. “We don’t want people to think, ‘I want to be like him.’ On the contrary, we are painting a very raw reality.”

De la O says he’s not too concerned by what the drug lord, who is said to be prickly about how he is portrayed by the media, will make of the show. “I don’t think he’ll be offended because we are making it with a lot of respect,” he says.

There’s little chance of El Chapo catching an episode any time soon, however. Judge Cogan ruled that he has to stay in solitary confinement, locked up 23 hours a day in a secure wing of New York’s Metropolitan Correctional Center often reserved for terrorists. When he goes to the rec room, there is a TV but prison officials choose the channel – and one of the few shows he has been allowed to watch is a nature program about rhinoceroses. 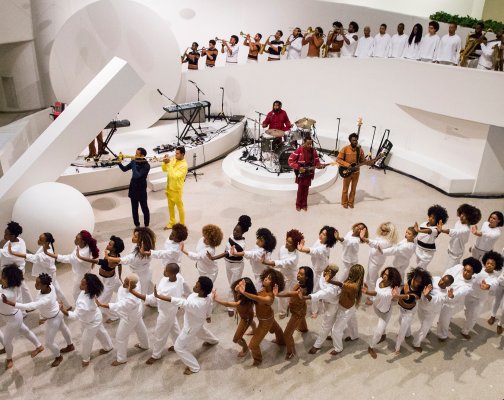 8 Things to Know About Solange's Super Secret Guggenheim Performance
Next Up: Editor's Pick