Images of President Donald Trump are displayed on billboards, ahead of Trump's visit to Saudi Arabia, in Riyadh, Saudi Arabia on May 18, 2017.
Ahmed Youssef Elsayed Abdelrehim—Anadolu Agency/Getty Images
By Jared Malsin / Riyadh

The billboards show the two smiling leaders side by side: President Donald Trump on the left, King Salman on the right. The slogan beneath reads, ‘Together we prevail.’ The signs, along with others pairing the U.S. and Saudi flags, can be seen alongside roads and outside hotels throughout the Saudi capital. They’re difficult to miss.

When Air Force One touches down in Riyadh on Saturday, it will kick off a foreign trip by President Trump that has taken on an air of the bizarre before it even begins. In Washington, the U.S. president is battling investigations into possible collusion with Russian interference in the U.S. election and obstruction of justice. As a result, Trump’s nine-day overseas tour has drawn comparisons to President Richard Nixon’s trip to the Middle East in June 1974, an apparent attempt to lift his political fortunes that took place weeks before he was forced to resign as a result of Watergate.

No matter the rumbling at home, Trump can expect a warm welcome in Saudi Arabia, where his visit is being talked up in glowing terms. Much of Saudi Arabia’s media have applauded the visit as marking the dawn of a new phase in Saudi-American relations. The mass circulation newspaper Okaz reported on Friday that the visit would launch “new phase of close relations between the Kingdom and the United States in various fields.” In the historically outspoken al-Watan newspaper, poet and writer Abdel Matloub Badrani called Trump’s visit “historic,” and described Trump as breaking with past policies of former President Obama, whom he criticized for “taking Iran’s side.” In the English-language Arab News, editor-in-chief Faisal J. Abbas wrote of Trump’s visit, “The stars cannot be any better aligned for a real, positive an lasting change change to occur.”

It’s a stark contrast with the treatment of President Obama, towards the end of his term. In 2016, tensions emerged with the Saudi Royal family after Obama held up a delivery of weapons over the killing of civilians in the Saudi-led military offensive on Yemen. In mainstream Saudi discourse, Obama came to be seen as leaning diplomatically toward regional rival Iran, following the 2015 Iranian nuclear deal.

Accordingly, many Saudis TIME spoke to expressed hope that Trump’s visit could represent an opportunity to refresh relations with the United States. “I’m optimistic that it’s going to be a good thing,” said Meshal al-Turki, 29 who described himself as a purchaser for a specialized company. Asked about Trump’s history of anti-Muslim remarks, he said, “At the beginning, yes, I was surprised. His response was strange, but it’s the opposite of his response now,” he says. “It’s strange, maybe he got the right message about Islam as a religion, about Islamic society.”

The President will have an opportunity to finesse that message in the centerpiece of his visit, a speech on Islam that will be his answer to Barack Obama’s iconic speech in Cairo in June 2009 in which the former president attempted to open a new era of respect and open relations between between America and Muslims.

Trump’s speech promises to strike a different tone, as it is being written by policy advisor Stephen Miller, one of the architects of Trump’s executive order in January that banned citizens of seven Muslim majority nations from entering the United States. At the time the order was issued, the American-allied Saudi government remained silent on the issue, and today many Saudis seem relieved that they were not included in the initial ban, which has now been suspended by a U.S. court order.

No doubt his speech on Sunday will be more inclusive than some of his former remarks about Muslims, and indeed the religion’s spiritual home. In the past, Trump has said that Islam “hates us” and claimed that Saudi Arabia “wouldn’t exist” without American protection.

But ordinary Saudis seem prepared to set aside his explosive rhetoric from the past. Outside a supermarket in an upscale Riyadh shopping mall, 60-year-old retiree Fahad Muhammad expressed criticism at the “kind of racism” in Trump’s entry ban on citizens from Muslim countries. However, he still welcomed Trump’s visit. “It’s necessary to sit at the same table. Americans and the West, sitting with the Arabs and Muslims, Muslim Arab states. It’s better that way, to have a discussion.”

Trump’s discussions are expected to extend from diplomacy to an area he’s more familiar with — business. He’s expected to seal a set of arms deals that he can later claim led to the creation of jobs, one of his core campaign promises, and top executives from the likes of JPMorgan Chase, Citigroup, Lockheed Martin, Dow Chemical and General Electric are due to attend an expansive two-day series of conferences, including leaders from 55 different countries .

“This is not an exercise in affection. It’s not a celebration of common values,” says Charles Freeman, a retired career diplomat and former U.S. ambassador to Saudi Arabia. “The Saudis felt a loyalty to the United States. That’s been gone for quite a while. This relationship is transactional. Everyone asks, what’s in it for me?”

This wheeler-dealing likely won’t leave a lot of time for raising human rights concerns — for example, over the case of three young men in Saudi prison who are now facing the death penalty after being arrested as teenagers during a crackdown on protests in 2012. That’s not really Trump’s style anyway, says Hatoon al-Fassi, a prominent Saudi historian currently at Qatar University. “He doesn’t come across as someone who is very keen on women’s rights or any humans rights. I think he’s a very pragmatic person. We don’t have any high expectations. We are looking at the event as very good PR for Saudi Arabia.” 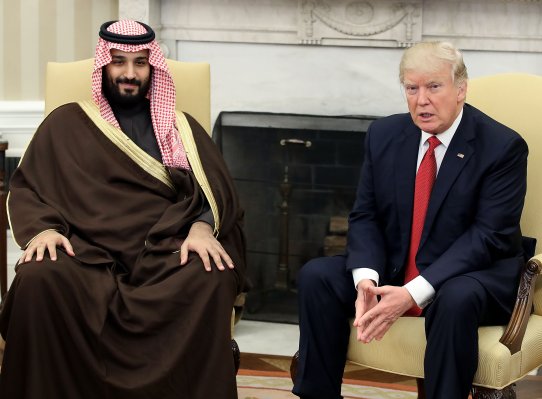 President Trump Is Visiting Saudi Arabia to Cement a Friendship
Next Up: Editor's Pick