While the U.S. Is Distracted, Beijing Is Winning the Battle to Control the South China Sea

Remember the furore over the South China Sea? The Chinese do. Americans seem preoccupied, though, with Russia’s social media war on the U.S., and North Korea’s nuclear program. These, combined with huge gaps in the Trump administration’s foreign policy team, may be handing Beijing almost complete control of the South China Sea. So have deft Chinese diplomacy and a pro-Beijing change of guard in former bitter rival, the Philippines.

On Thursday, China and the 10-member Association of Southeast Asian Nations (ASEAN) agreed a framework for a code of conduct that will apply to the disputed waterway in the latest sign of waning U.S. influence. Almost a third of the world’s trade, worth $5 trillion annually, passes through the South China Sea, which Beijing claims in its entirety and the Philippines, Malaysia, Brunei, Vietnam and Taiwan do in part.

Having stalled on code of conduct for over a decade, China, perhaps seeing a decisive tip in its favor, is now pushing to see a draft by a provisional deadline of August. Chinese Vice Foreign Minister Liu Zhenmin even gave a not-so-subtle message for the U.S. to stay out of it: “We hope that our consultations on the code are not subject to any outside interference,” he said on Thursday.

“The leadership in Beijing must think that its won the lottery,” says Professor Nick Bisley, an Asia specialist at Australia’s La Trobe University. “It signals that ASEAN is prepared to bend on certain issues, which must be favorable to Beijing.”

A code of conduct was first proposed in 2000. In the interim, China has angered rival claimants by seizing, expanding and militarizing islets and reefs in the Souh China Sea — transforming low-tide outcroppings into what have been dubbed “unsinkable aircraft carriers,” all in apparent violation of the U.N. Convention on the Law of the Sea.

In response, the Obama Administration ramped up naval Freedom of Navigation Operations through the area. However, despite U.S. Secretary of State Rex Tillerson telling his confirmation hearings that the patrols should be maintained, and China would “not be allowed” to visit those islands it had already built, not one such patrol has taken place under President Donald Trump. (According to the New York Times, three requested operations did not receive approval.)

The speculation is that either Trump has taken his eye off the ball, or is deliberating not pursuing the South China Sea in exchange for China’s cooperation on other issues — most likely trade and pressuring North Korean Supreme Leader Kim Jong Un over his nuclear weapons program.

“President Trump’s reluctance to confront China over the South China Sea is, in part, a product of his failure to appoint senior officials to the State and Defense Departments, writes Carlyle Thayer, emeritus professor at the Australian Defence Force Academy, in a briefing paper. “As a result, the Trump Administration has a myopic strategic view rather than a comprehensive strategic view.”

The election of President Rodrigo Duterte in the Philippines has meanwhile been a great boon to China’s claims. The former president, Benigno Aquino took Beijing to the Permanent Court of Arbitration in the Hague over China’s 2012 occupation of the disputed Scarborough Shoal, which lies less than 200 nautical miles from Manila. He obtained a favorable ruling on behalf of the Philippines, which Duterte has astonishingly set aside, instead offering to solve the issue bilaterally.

On Friday, Manila and Beijing held direct talks on the South China Sea issue for the first time. Duterte has shamelessly tried to cadge financial assistance from China with the hope of building a railway across the archipelago nation’s main islands of Luzon and Mindanao.

“If the Philippines cuts a deal, especially with a White House that looks like it doesn’t care about this issue, then the other claimants’ incentive structure changes,” adds Bisley. “We may well see a scaling back of ambition and they might start saying, ‘what can we get now?’ Because the longer this goes on the worse this is going to be.”

It’s likely that a bilateral agreement will be reached in exchange for Chinese financial assistance and a guarantee not to militarize the Scarborough Shoal. But any deal undercuts the efforts of other claimants to internationalize the dispute and force through a stricter code of conduct. Compounding issues, the Philippines, under Duterte, is currently ASEAN chair.

That has already paid China dividends. On April 30, a statement at the conclusion of the 30th ASEAN Summit in Manila pointedly dropped references to “land reclamation and militarization” in the South China Sea that had previously been included. A watered down code of conduct that effectively hands Beijing dominion over the South China Sea may be the next step.

Adds Thayer: “The reality is that ASEAN is gradually accepting that the South China Sea has become China’s lake.” 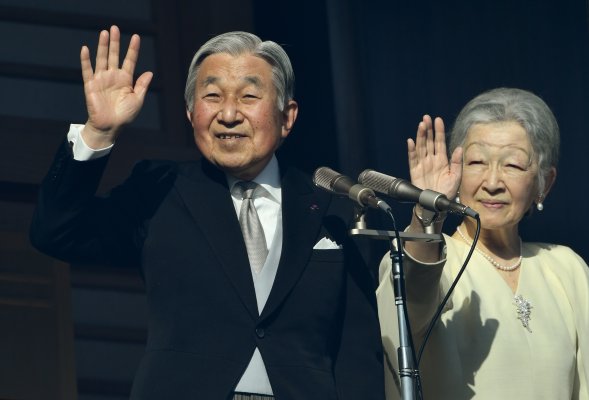 Japan's Emperor Akihito Is a Step Closer to Abdicating
Next Up: Editor's Pick