Brad Pitt, George Clooney, Ellen DeGeneres, and Jimmy Kimmel may be known as the ultimate pranksters, but Katy Perry may be giving them a run for their money. The pop star decided to have a little fun with visitors at New York’s The Whitney museum by quite literally immersing herself in the art.

For the prank, she transformed the cover art from new single “Bon Appetit” into a three-dimensional sculpture, serving up her own head on a platter surrounded by fruit and completely scaring the tuna salad out of innocent museum-goers. The ruse was apparently the brainchild of Perry and Vanity Fair’s man-about-town Derek Blasberg, who presented the museum with the reasonable sounding ploy that Santa Barbara-based artist Katheryn Hudson (Katy’s birth name) was doing “a site-specific, one-day-only installation” and Blasberg would document their responses.

The results were hilarious with Perry’s seemingly disembodied head popping to life to make small talk with museum-goers. The visitors were startled, but Perry’s prank fits right in with much of the art on display at The Whitney’s Biennial and that pineapple that was accidentally turned into fine art.

It’s impressive that Perry found time for the stunt, because she just announced she would be a judge on ABC’s rebooted American Idol and releasing a new album, Witness, on June 9 with an accompanying world tour. 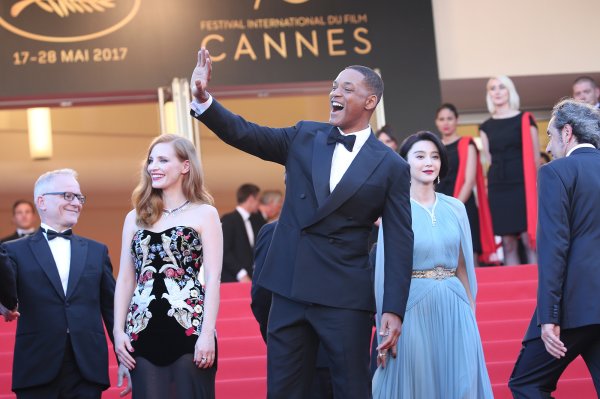 Will Smith Is Living His Best Life as the Fresh Prince of Cannes
Next Up: Editor's Pick