How Harvard Is Teaching Resistance

Rainer Elstermann—Getty Images
Ideas
By Shanoor Seervai
Seervai, a graduate student in Public Policy at the John F. Kennedy School of Government at Harvard University, is a co-founder of Resistance School.

While deep fault lines have long divided America, the shifts our democracy faces today feel particularly tectonic. They have released an astounding sum of raw energy, revealed in large public demonstrations — both spontaneous and strategic — and impassioned debate at town halls and online.

Without this energy, no movement would get off the ground. The important question that remains is: How does one turn that energy into action, into a lasting and impactful movement?

The stakes for our democracy are high. What hangs in the balance are the central tenets of what America stands for — values of freedom and fairness, an appreciation for difference and the will to strive for a more just and equal democracy.

At Harvard, progressive graduate students built Resistance School, a free training program for communities seeking to organize around issues and elections they care about. In April, the organization live-streamed its first four sessions on key skills required to take collective action. While we found there is no single way to resist, we learned some powerful lessons on the work ahead.

1. Do Know Exactly What You’re Trying to Say — And Why

In a hyperpolarized political climate, communicate with absolute intent and clear knowledge — including on why opposition itself is principled. As activist and historian Timothy Patrick McCarthy explained: Resistance is the bedrock of America’s founding documents.

This past places our present in context. Possessing an understanding of our history of fighting against injustice enables us to articulate why we’re doing what we are. “Values are essential, not only to resistance, but to social change,” McCarthy explained. “We need to be able to say what’s wrong and we also need to be able to say what we would want to be right and how we might get there.”

To effectively communicate our values, we must name non-negotiables and find ways to talk about them in a frame that resonates with those listening. A willingness to be vulnerable, and to share stories of struggle and aspiration, deepens our emotional connection with each other. Those historical and personal foundations are essential to taking on difficult conversations with a broader audience.

Too often, we pour our energy into short-term mobilizing efforts — asking people to sign a petition, call a congressperson, turn up to protest. Sara El-Amine, a nine-year veteran of the Obama grassroots movement, pointed out that the goal should instead be to commit people to organizing around issue-based and electoral campaigns.

Mobilizing is successful at securing a specific collective action, El-Amine said. For example, after President Donald Trump issued his January executive order barring citizens of seven Muslim-majority countries from entering the United States, the string of marches opposing the ban was a powerful short-term victory. But such efforts must go hand-in-hand with organizing, which draws on the creativity of grassroots movements and gives “people the tools to do these things on their own” throughout the long-term.

Specifically, organizing requires getting more and more people to engage with the perspectives of others and utilize the art of political persuasion. “When you drop your shoulders and you smile and you listen to someone and you actually meet them human to human… in many cases, you can change more minds than you even imagined,” she said.

These persuasive conversations, even with those with whom we disagree, are key to organizing, to weaving back the fabric of our democracy and repairing the capacity of people to advocate for what matters to them. They also help a movement reach and create more active citizens who can help not just now, but in the future.

3. Do Find Leaders Who Will Work With Everyone to Make Decisions

Leadership, as longtime community organizer Marshall Ganz explained, is “not about asserting control, but much more about pursuing purpose in the face of uncertainty.”

Organizing calls upon a specific type of leadership. It requires engaging communities and bringing them together, defining collective goals and then working with the community members “to turn their resources into the power that they need in order to achieve the change that they want,” Ganz said.

To make this happen, leaders should build relationships both within and across their communities and develop a way to give people ownership of making decisions. It’s that structure that allows people to move toward their shared purpose, to overcome obstacles — and, as Ganz said, “to turn resistance into rebuilding, and reaction into action.”

4. Do Keep Going, Even After Achieving Success, to Keep the Resistance Alive

“You can’t have a resistance if you’re just resisting one time,” said Michael Blake, Vice Chair of the Democratic National Committee. “If you want to have true success, you have to understand that it’s not just about marching one time. You have to keep marching.”

Blake drew on his own experience as a New York Assembly Member from the South Bronx, a diverse cross-section of America, to remind everyone that the resistance needs to work harder than ever to reflect the needs and priorities of marginalized communities, whose struggles have lasted for generations.

The longevity of the resistance depends on thinking sharply about how to measure progress as movements ebb and flow through victories and failures. Goals are — and should be — aspirational, but the way we get there is by setting tangible objectives for the impact we’re trying to have.

As we prepare to launch a second semester of Resistance School, Blake’s message underscores our founding goal: to turn renewed civic engagement into lasting involvement. Because only then can it create enduring change. To those who find themselves newly called to resist as well as those who have long been defending a cause, our democracy needs you. It’s worth fighting for. 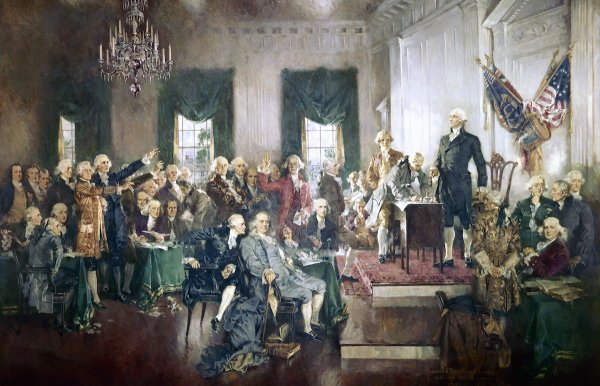 The Founding Fathers Disagreed About the President's Power to Fire People
Next Up: Editor's Pick