Long before Bryan Cranston played a chemistry fan on Breaking Bad, he played one in his high school yearbook. On Wednesday night’s episode of Jimmy Kimmel Live! Cranston recounted trolling the chemistry club at his high school by sneaking into their yearbook photo.

In the wake of his Emmy Award-winning work as chemistry professor-turned-meth kingpin in Breaking Bad, that chemistry club photo has a gotten a lot of traction with people reporting on it as a portent of a life-long relationship with chemistry. Turns out it was a big joke . “Were it true it would be a great story about how it was a precursor to Walter White,” says Cranston. “But it’s not true.”

In his conversation with Jimmy Kimmel, Cranston reveals that he can be spotted in a lot of high school clubs, clubs he never belonged to. He just really liked sneaking into their yearbook photos. While Cranston tried to put the rumor to rest, the truth came too late for his high school who included an homage to Cranston in their new yearbook, including his chemistry club involvement.

While Cranston may not have chemistry in common with Walter White, they’ll always have being murder suspects in common. 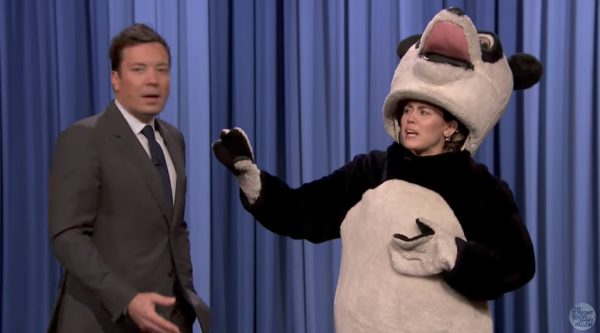 Miley Cyrus Pops Up as a Panda on the 'Tonight Show'
Next Up: Editor's Pick