Following the appointment of a special counsel to investigate Russia’s alleged interference in the 2016 presidential election, President Donald Trump took to Twitter to denounce the move as the “single greatest witch hunt of a politician in American history!”

It isn’t the first time Trump has described the probe into Russian involvement in the election as a “witch hunt” by Democrats. But his tweet seem to strike a nerve on social media on Thursday. In addition to seemingly ignoring some other large political witch hunts (see: the Red Scare), others noted the complicated and gendered history of the term itself.

“I don’t want to be a purist of language. It’s OK to use these metaphors,” Michelle Brock, an assistant professor of history at Washington & Lee University who researches witchcraft and religion, told Motto. “But I think it needs to be done in a way that’s conscientious of the historical weight of those terms and recognizes the seriousness of what those terms have meant in the past and present.”

Between roughly 1450 and 1750, as Brock noted, European societies panicked that many individuals were witches possessed by the devil and capable of harming others. Many were put on trial and thousands were executed. The paranoia also touched down in the U.S., most notably in Salem, Mass.

And of course, the vast majority of the people targeted in the “witch hunts” were women.

“The idea of the witch is very gendered,” Brock said. “There was this idea that women were more susceptible to the devil because they were of the weaker, frailer sex. There were some incredibly misogynistic texts written in the 15th, 16th and 17th centuries about women as witches.”

The word takes on a new irony considering the treatment of Trump’s opponent, Hillary Clinton, by his supporters during the presidential election. Trump’s supporters frequently chanted “lock her up” in reference to the first female presidential candidate of a major political party. Stacy Schiff, the author of The Witches: Suspicion, Betrayal and Hysteria in 1692 Salem, wrote in the New York Times that the episodes echoed the treatment of suspected witches during the hunts.

Some Trump supporters invoked actual “witch” imagery at rallies on the campaign trail to describe Clinton. Conservative talk show host Rush Limbaugh even referred to Clinton as a “witch with a capital B” after the first presidential debate.

“One of the great ironies of this of course is that Trump is not someone who has an especially high view of women,” Brock said. “For Trump to co-opt that term to paint himself as a victim shows a total misunderstanding and woeful ignorance of women — but also an unwillingness to see how power structures work and to be sensitive to the deep meanings behind this terminology.”

Brock says that she’s not suggesting that we completely retire the term, which has been used to refer to a number of other political scandals. But she does think that we need to be mindful of its context and historical significance. Its figurative definition, according to Merriam-Webster, is “the searching out and deliberate harassment of those (such as political opponents) with unpopular views.”

“We can talk about witch hunts without witches,” Brock said. “But if you want to use them to describe something happening now, it needs to be done in a way that’s cognizant of that history.” 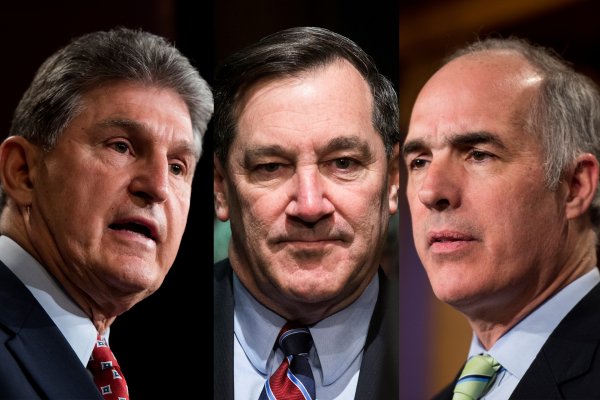 All of the 'Pro-Life' Democrats in Congress Are Men
Next Up: Editor's Pick