President Trump’s forays into Middle East diplomacy have been as unpredictable as the rest of his presidency and his first visit to Israel as Commander-in-Chief promises more of the same.

Originally billed as a warm welcome to an outspoken friend, his visit has become overshadowed by a slew of unseemly spats over Jerusalem, intelligence-sharing and settlements, while the Palestinians look on, perhaps unable to believe their luck. But their joy could be short-lived.

Here are a few questions Trump faces in his lightning first trip to meet Israelis and Palestinians on their home ground:

Israelis were shocked this week to learn that Trump may have divulged some of their secret intelligence on ISIS to the Russians, an ally of Iran, Israel’s sworn enemy. After the Washington Post revealed that Trump had shared classified reports with the Russian foreign minister and ambassador, the New York Times and ABC quoted sources asserting that the information came from an Israeli spy embedded with ISIS. Israeli media said the intelligence was related to a plot to carry a booby-trapped laptop onto a plane that triggered a sudden ban on computers on flights to the US and UK in March. There was no official confirmation from Israel, but the head of Israel’s military intelligence was reported to be in Washington trying to defuse the crisis.

The reports certainly caused dismay from some in Israeli intel circles. Former Mossad chief Shabtai Shavit urged Israel to re-assess its intelligence-sharing with the CIA after Trump’s “bull in a china shop” behavior. “The rules of proper operation demand that even a president of the world’s greatest power consult with the experts,” Shavit told The Times of Israel. “That’s why the government pays them.”

But others said the bond between Israel and the U.S. intel communities is built of sterner stuff. “The security relationship between Israel and our greatest ally the United States is deep, significant and unprecedented in volume,” Israeli Defense Minister Avigdor Liberman tweeted. “This relationship with the U.S. is unprecedented in its contribution to our strength. This is how it has been and how it will continue to be.”

The fallout may be temporary, in other words. “It may cause a small damage or a local one,” said Amnon Sofrin, a former head of Mossad’s intelligence directorate, “but not a disaster.”

Donald Trump seems like the Middle East’s most unlikely peacemaker — but could that work to his advantage? Expectations are so low, and his experience is so limited, he could be the breath of fresh air required after decades of diplomatic sophistry.

Certainly, Trump’s ingénue naïveté is one rare thing on which both sides appear to agree. “What Trump has going for him is so far no-one wants to be the one to say no to Donald Trump. That’s what he seems to be counting on to get short-term gains,” says David Makovsky of the Washington Institute for Near East Policy, who served on John Kerry’s Middle East peace team.

His team has also gone down well — Jason Greenblatt, Trump’s newly-appointed envoy, has impressed both sides. “He doesn’t come from the peace process establishment. He comes from the business world. I found sitting with him remarkably refreshing,” says Michael Oren, an Israeli deputy minister and former ambassador to Washington.

There are green shoots of progress. Palestinian officials tell TIME that plans to restart security training by the CIA in Langley for Palestinian security forces, shelved after Trump’s victory, are now back on the agenda. The sudden warmth and talk of the Palestinians as “strategic partners” tell the Palestinians that Trump’s willingness to engage is not just for show.

“The approach that he started made us optimistic that maybe he is the right man,” says Jibril Rajoub, secretary-general of the central committee of Fatah, the party headed by Palestinian President Mahmoud Abbas. “In his meeting with the president, he encouraged us to believe that it’s the right time. Our impression is that there is a very serious effort to make the ultimate deal.”

Trump amazed seasoned observers during his White House press conference with Israeli Prime Minister Benjamin Netanyahu in February when he appeared to discard the long-standing U.S. policy of a two-state solution to the Israel-Palestine conflict, saying he was “looking at two-state and one-state” and “can live with either one” agreed by the parties.

Israel’s official position, set out by Netanyahu in a 2009 speech at Bar-Ilan University, is to support the creation of a demilitarized Palestinian state alongside Israel. But large swaths of the Israeli public, including members of the government coalition and even Netanyahu’s own party, are vehemently opposed. Netanyahu himself said in March 2015 that the Palestinians’ policy had made the notion “irrelevant.” The recent turmoil in Syria and Iraq has added security fears to Israel’s concerns. “We can’t afford to have a state on our border that’s going to fall apart in a matter of hours. That’s the bottom line,” says Michael Oren.

As Israel backs away from two states, Palestinian support is growing. Earlier this month, Hamas amended its charter, officially endorsing the creation of a West Bank and Gaza state – but only as a first step towards liberating all of Palestine. Rajoub says that’s a glass half full. “For the first time the Palestinians are talking unanimously about the two-state solution,” he says. “Regionally, there is no state against this political settlement.”

4. Will the U.S. Embassy move to Jerusalem?

Trump arrives in Jerusalem on the eve of the 50th anniversary of the Six-Day War, when Israelis captured the city, and it remains a central issue in peace talks. Israel wants it to be their “eternal, undivided capital.” The Palestinians want the pre-1967 border through the city reinstated so they can establish their own capital in East Jerusalem.

No-one in the international community recognizes the current city of Jerusalem as the capital of Israel, and the U.S. embassy remains firmly anchored in Tel Aviv. However, before his election Trump had vowed to transfer it. By February he was prevaricating. “As far as the embassy moving to Jerusalem, I’d love to see that happen. We’re looking at it very, very strongly. We’re looking at it with great care, great care, believe me. And we’ll see what happens. OK?” said Trump as he stood beside Netanyahu at the White House.

The waiver signed by every president since Bill Clinton delaying the move for another six months will land on Trump’s desk in early June. Israelis hope he won’t sign it. “The U.S. Embassy – like all embassies – should be moved to Jerusalem,” Netanyahu told the incoming U.S. ambassador on Tuesday. That would be “a fatal mistake” says Jibril Rajoub.

The issue was complicated, ahead of the trip, by a controversy surrounding Trump’s visit to the Western Wall, Judaism’s holiest shrine. Officials at the U.S. Consulate-General in Jerusalem urged against the visit, with one official describing the site as part of the West Bank. The White House disavowed those comments, but at a subsequent press briefing Trump’s national security adviser Lt. Gen. H.R. McMaster demurred from saying whether the wall, which forms the perimeter of the Temple Mount site that houses the Al-Aqsa Mosque, is Israeli territory.

5. Is Trump on board with new settlements?

Right-wing Israeli cabinet ministers hailed Trump’s election as an opportunity to annexe the West Bank and ramp up Israeli settlement activity. “Trump’s victory is an opportunity for Israel to immediately retract the notion of a Palestinian state in the center of the country, which would hurt our security and just cause,” said Education Minister Naftali Bennett, head of the pro-settler Jewish Home party.

Hardliners were further cheered by the appointment of David Friedman, Trump’s long-time lawyer and confidante, as the new ambassador to Israel. Friedman, an orthodox Jew, is a prominent supporter, fundraiser and frequent visitor to Israeli settlements in the West Bank. But during confirmation hearings, Friedman recanted some of his harsher statements – he had branded the Anti-Defamation League “morons” and the left-wing Zionist group J Street as “worse than kapos” – agreed that new settlements could hamper peace moves, and said he did not support Israel’s annexation of the West Bank.

So the settlers’ initial euphoria at Trump’s election is evaporating. Israeli officials have postponed decisions on new housing developments in East Jerusalem to avoid a repeat of the diplomatic disaster during a visit by Vice President Joe Biden in 2010. But there is intense pressure on Netanyahu from Bennett and others within his cabinet to take advantage of Trump’s election to entrench Israel’s control of the West Bank. That may not be as easy as it appeared last November. “I’ve been in the White House. My impression is that they want us to exhibit a significant amount of restraint,” says Oren.

6. Should Israelis and Palestinians unite to combat Iran?

Trump’s swing through Saudi Arabia, Jerusalem, Bethlehem and the Vatican is big on symbolism, as the White House has underlined, linking the centers of the world’s three great monotheistic religions. It also links the Middle East opponents of both Iran and ISIS.

The U.S. President has echoed the fears expressed both by Israel and the moderate Gulf states about the Iranian nuclear deal. “Now is the time to address this threat and not in 10 or 15 years’ time,” says Oren. Israeli media have reported that Netanyahu wanted to take military action against Iran, but was pulled back by his intelligence and security commanders.

The threat of Iran may yet build momentum for strategic alliances. The Arab League reportedly offered this week to normalize relations with Israel in return for a deal on Palestine, to better face Iran as it races towards nuclear military capacity. The grouping of 22 states believes such a deal could remove the barrier to regional cooperation with the Jewish state.

Will Trump agree that the Iranian threat justifies pressuring Israel into making concessions to the Palestinians in order to solidify the anti-Iranian front? Israeli officials are not convinced the risk is tolerable or necessary, but it could be the Palestinians’ trump card. “The emergence of a sovereign independent Palestinian state is the must to assure regional stability, security and global peace,” says Rajoub. 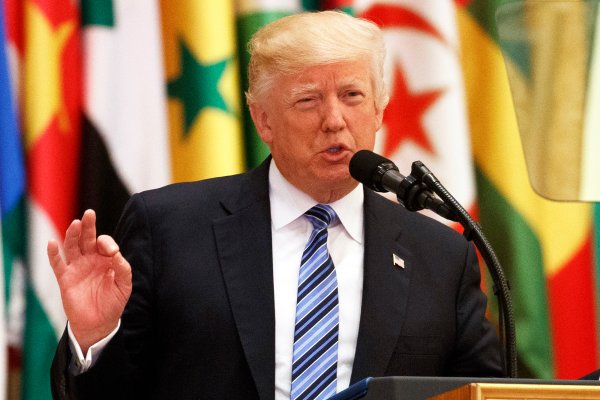 In Speech on Islam, Trump Strikes a More Moderate Tone
Next Up: Editor's Pick