Why President Trump Can Share Classified Information If He Wants

When the Washington Post reported on Monday that President Donald Trump had shared classified information with Russian officials during a meeting at the White House, the White House response was to deny that any military details had been shared that weren’t already known — even as the President attested on Twitter that he had the “absolute right” to share facts with foreign officials.

Whether or not the President did share information that others would want kept secret — a possibility that Russian media downplayed even as outlets like the New York Times continued to add details to the story, such as information about the Israeli sources of the intelligence — he’s basically correct that he could share such information if he wanted to.

The reason, says Timothy Naftali, Clinical Associate Professor of History and Public Service at New York University and former director of the Richard Nixon Presidential Library and Museum, goes all the way back to the Constitution and the basic structure of power in the United States.

“The president is the ultimate authorizing authority,” as he puts it.

The power to classify and declassify information — like the duty to protect intelligence sources and methods — has been reshaped several times over the course of American history, but the two powers are linked. The person or agency that has the right to keep something secret (or the successor agency, if original agency no longer exists) is the same one that has the right to decide when it should be made public. The hierarchical structure of government means that, in general, if a person has that power, so do her direct superiors, all the way up the chain. The President, at the top of the ladder, is everyone’s superior.

A concise explanation of what’s going on can be found in this 1974 Indiana Law Journal article about executive power and national security, by Charles R. Nesson: “Technically any official has authority to declassify any information classified by people subordinate to him. Thus when the President speaks, whether to the nation, to a reporter in private, or to a friend over cocktails, he automatically declassifies as he goes. There is no procedure, no paperwork. The same is true for other officials so long as they do not stray from the pyramids of classified information which have been generated beneath them.”

Though Naftali traces the idea behind that structure all the way back to the Constitution, a more granular codification of that power can be found in Executive Order 11,652, which President Richard Nixon signed in 1972, clarifying the system of classification and how information would be both protected and shared going forward. Among its many other provisions, the order was clear on who could share information that had been declared classified: “Information or material may be downgraded or declassified by the official authorizing the original classification, by a successor in capacity or by a supervisory official of either,” the order states.

In a statement on signing the order, Nixon said that his goal was to make sure that a balance could be maintained between the need for confidentiality inside government and the need for an informed public. He had ordered a review of the existing procedures in 1971, and he called the new rules for declassification “perhaps the most innovative and crucial aspect” of the order, because it would allow for easy downgrading of the many pieces of information that, due to the backlog in the review system, were in classification limbo. (Ironically, the Executive Order was an effort by Nixon to reassure the public in response to a perception of government secrecy; just a few months later, the Watergate break-in would occur.)

Although that particular order would be replaced by further refinements of the classification system, the newer version (Executive Order 13,526 from 2009) retains the power for supervising officials to declassify information.

“The way the system works now is that the successor agency to the organization that created the info back in the day has the right to decide whether the info can be released. If the CIA created the document, they can decide whether to release it,” Naftali explains. “The president is on top of the entire executive branch and can decide on his own whether to release executive branch information.”

As Naftali wrote for CNN in January, there have been at least a few times when Presidents have made notable decisions to make use of the power to share intelligence information widely. For example, in 1986, President Reagan chose to reveal U.S. intelligence capabilities with regard to Libya in order to make the case that Libya was behind a terrorist attack.

However, Naftali adds, intelligence that comes originally from Israel is, in practice if not by law, a different story than intelligence uncovered by U.S. operatives. “Sharing somebody else’s secrets is fraught in a way that sharing your own secrets is not,” he says. “You want your allies to trust you with their most secret information.”

One of the features of the American system is that winning a presidential election is, in a way, its own security-clearance process. There’s no other agency that vets the incoming president — if there were, it would be an undemocratic check on the people’s will, Naftali points out — and the security clearance comes automatically with the office. That means that, when it comes to sharing information with the President, trust is not a matter of background checks and investigations. So, while major intelligence-sharing alliances are unlikely to be disturbed by any given election, as they exist because they’re in the allies’ own interests, Naftali says that more fragile alliances may be shaken if there’s the impression that secrets aren’t safe with the President.

“That’s why this matters. It’s not that Trump has violated a secrecy agreement. He hasn’t. He can do this,” Naftali says. “It can be legal and unwise at the same time. The President can share this information but just because he can do something doesn’t mean it’s a good idea.” 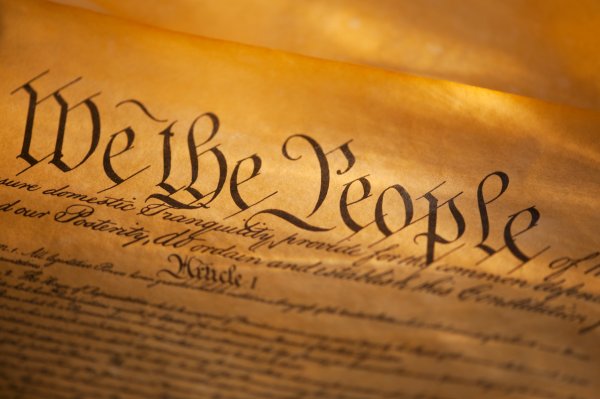 New Interactive Tool Traces the Evolution of the U.S. Constitution
Next Up: Editor's Pick