President Donald Trump gathers with Congressional Republicans in the Rose Garden of the White House after the House of Representatives approved the American Healthcare Act, to repeal major parts of Obamacare and replace it with the Republican healthcare plan, in Washington, May 4, 2017.
Carlos Barria—Reuters
By Sam Frizell

Vulnerable Republican members of Congress may have damaged their reelection chances in 2018 by voting to repeal the Affordable Care Act, according to a new poll by a Democratic-affiliated firm.

Conducted by the liberal super PACs Priorities USA Action and Patriot Majority, the poll also showed that the more voters know about the bill, the more they dislike it. In the 15 congressional districts where the survey was taken, 45% said they know a lot about the bill; of those, 34% have a favorable opinion of it and 65% are unfavorable.

Polls have shown that Obamacare has quickly gained in popularity as it has come under threat, and a majority of Americans say they want Republicans to “do what they can to make [Obamacare] work,” according to a Kaiser Family Foundation poll from early April. A Quinnipiac poll showed that an earlier version of the Republican bill had a 17% approval rating.

The Republican bill repeals Obamacare’s requirement that all people buy health insurance and eliminates a number of popular regulations on insurance companies. It allows states to opt out of regulations prohibiting insurance companies from raising premiums on people with preexisting conditions, and dramatically reduces federal assistance to low- and middle-income people buying health insurance. It also would cut hundreds of billions of dollars to Medicaid.

Priorities USA has already begun running ads targeting Republican lawmakers who supported the health care bill, spending more than $100,000 on a digital ad campaign beginning last month against Republicans for provisions exempting lawmakers from some of the more negative provisions of their bill. (Republicans later voted in favor of a separate measure ensuring all parts of the bill applied to lawmakers.)

Democrats looking ahead to the 2018 election already plan to use Republicans’ health care vote as a cudgel to try and win back the House of Representatives.

“You have every provision of this bill tattooed on your forehead,” said House Minority Leader Nancy Pelosi before Republicans voted for the bill earlier this month. “You will glow in the dark on this one.”

Garin-Hart-Yang Research, a Democratic firm, conducted the survey of 750 voters across 15 districts in Arizona, California, Florida, Iowa, Illinois, Maine, Minnesota, New York, Texas and Virginia between May 8 and 10. 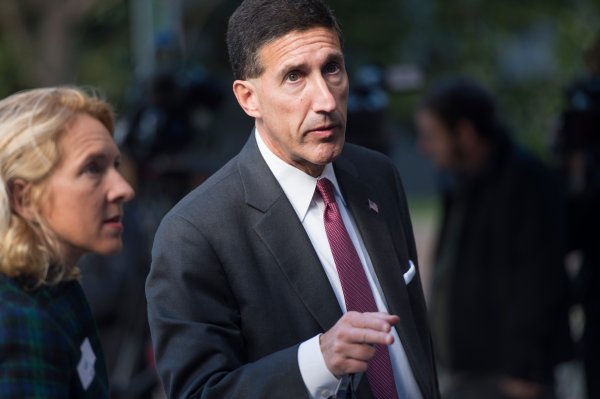