John Oliver was aware that when he announced that he was dedicating the main story of Last Week Tonight to the topic of kidney dialysis, he was risking the entire audience lunging for the remote and switching to “literally anything else.” However, he clearly thought the topic was important enough to risk it.

Kidney dialysis is more or less where a machine acts as your kidneys, filtering impurities from your blood, or as Oliver explained in an admittedly disgusting analogy: “It’s like a Brita pitcher for your blood.” According to Oliver, kidney disease is the ninth leading cause of death in the U.S., even though by some accounts America is spending more on treatment than any other country. “We’re paying for a fully loaded Lamborghini and receiving a drunk donkey on roller skates,” Oliver said.

In 1972, President Richard Nixon signed a law saying that the U.S. government would pay for dialysis for anyone who needed it. (“It’s like your kidneys and only your kidney are Canadian,” said Oliver.) Now, though, there are so many patients who need treatment for kidney disease that it costs the government approximately 1% of the entire federal budget, according to Oliver. One of the largest for-profit kidney dialysis companies in the U.S. is the Denver-based company, DaVita, and Oliver spent a long time looking at complaints against them. The list includes things like sanitation problems, a history of discouraging transplants, a whistleblower suit, kickbacks, what could be “the biggest waste of drugs since someone did cocaine in a windstorm,” and the fact that their CEO dresses like a Musketeer and claims to runs his health care company “like it’s a Taco Bell.”

Oliver couldn’t let that comparison to Taco Bell go without comment, so he made an ad for Taco Bell noting that it has nothing in common with health care — and never will and never, ever should.

Oliver also noted that there should be better incentives for transplants and treating kidney disease earlier. To combat the shortage of kidneys, Oliver urged everyone to sign up to be an organ donor when they die. 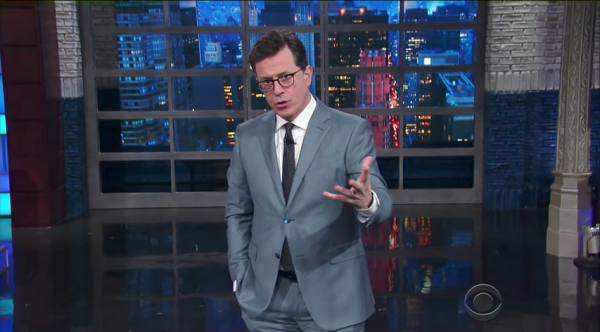 Stephen Colbert Has a Carefree Response to Donald Trump Saying He Is 'A No-Talent Guy'
Next Up: Editor's Pick