It’s hard to say, at this point, who exactly wants or needs another Alien movie. But somehow, even among those who profess not to care much, there’s at least a flutter of curiosity—perhaps the silent clarion call of a microscopic alien that slipped into our bloodstream years ago?—about every new Alien picture, including Alien: Covenant, the sixth entry in the series and the third to be directed by Ridley Scott.

The last film in the franchise, Scott’s 2012 Prometheus, disappointed some fans and inspired elaborate defenses from others. A cerebral sort-of prequel that often felt inorganic and stiff, Prometheus did, at least, feature Michael Fassbender as the inscrutable, multilingual android David, the lone nonhuman on a ship headed to God-knows-where for God-knows-what. In one of that film’s most poetic sequences, David, his shipmates asleep, sits himself down before a giant movie screen and basks in the glow of David Lean’s Lawrence of Arabia, clearly fancying himself the spiritual—and almost the physical—twin of Peter O’Toole’s class-act archaeologist T.E. Lawrence.

Fassbender reappears in Alien: Covenant, playing not just David but also another, possibly much nicer android, Walter. The duo’s wary tête-à-tête, occurring late the film, is the second-best reason to see Alien: Covenant. The first is the film’s opening 40 minutes or so, spooky in their elegance and making a lot of promises the rest of the movie just can’t live up to.

Alien: Covenant is set in 2104—that’s 10 years after Prometheus and 18 years before chicken parts will burst out of John Hurt’s chest in the first Alien. At the beginning of Alien: Covenant—named after the ship at the center of its story—we learn that the Covenant’s captain, played in a blink-and-you-miss-it cameo by James Franco, has died. Now Oram (Billy Crudup) is in charge, though the crew doesn’t trust him, ostensibly because of his religious beliefs (a thread that’s introduced and then dropped cold). Captain Franco, or whatever his name was, leaves behind a grieving widow, Daniels (Katherine Waterston, in a deeply unflattering bowl haircut), who vows to trudge on: The ship, filled with crew members (including dudes played by Demián Bichir and Danny McBride and lady ’nauts played by Amy Seimetz and Carmen Ejogo), plus a bunch of hypersleeping citizens, is headed toward a planet thought to be inhabitable by humans and thus ready for colonization.

Sidetracked, the Covenant never gets there. Instead, Oram and part of his crew touch down on the planet where we last left Fassbender’s David and Noomi Rapace’s Elizabeth Shaw in Prometheus. At first glance, the place looks OK—it’s lush with vegetation. But the crew quickly notices the absence of birds and animals. The gang’s initial encounter with this creepy-as-hell landscape is the finest section of the movie, and it features a glorious moment. A small pile of silvery dust particles— quietly glittering, like graphite shavings—rise from the ground and form a little fiddlehead-fern-style curlicue, which floats quietly into the…well, you just might want this to see for yourself.

Alien: Covenant is reasonably entertaining. But it slips off course after that opening section, and the problem is caused by the very creatures we presumably came to see. The 1979 Alien, austere and masterfully restrained, had surprise on its side. (Those exploding chicken parts!) It was impossible not to love—in a complicated romance that also enfolded dread, fear and awe—the elaborate yet elemental creature designed by the late H.R. Giger. Prometheus suffered from a paucity of these critters. They reappear in Alien: Covenant in several forms. The best is a galloping, reptilian baby filled with eggheaded rage.

But by the end of the film, these ewky wangdoodles are no longer terrifying—they’re just business as usual. At least there’s still Fassbender in those dual roles. When Walter and David meet, the moment is an obvious echo of Narcissus gazing at his own reflection, as if each were saying to the other, “You look just like me, except maybe not quite as beautiful!” The ego of one clashes with the ideals—if androids can have ideals—of the other. David and Walter argue over science and morality, though as we try to follow the conversation, their perfectly matched perfect cheekbones are obviously a distraction. Alien: Covenant is filled with heady ideas that don’t carry much dramatic weight in the end. But it’s hard to argue with two-for-one Fassbenders. How did we ever make do with just one? 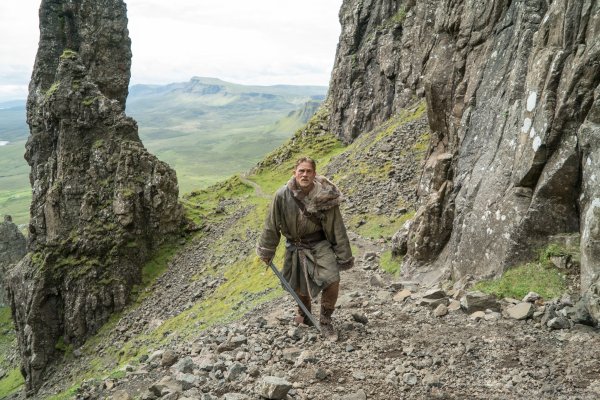 The True History Behind the Legend of King Arthur
Next Up: Editor's Pick