Miley Cyrus’s return to music with new single “Malibu” also means the singer and former Disney starlet is taking a trip through memory lane. During a visit to Radio Disney, Cyrus had the chance to re-watch one of her game-changing audition tapes for Hannah Montana, the show that launched her to stardom. This clip is of her singing, foreshadowing her musical success to come.

“By the way, my t-shirt says ‘I should have my own TV show,'” Cyrus pointed out as she began watching the clip. In it, a pre-fame Cyrus confidently belts out a song called “Let’s Go to the Beach.” The executives she’s performing for in the tape ask her if she’s signed to a record label yet. “No, but it’s going to happen,” young Miley responded with lots of attitude, a hair toss, and a distinctive southern accent. “And you are just the one that’s gonna do it,” present-day Miley added with a laugh.

“Looks like someone had an eye for talent,” someone else in the room chimed in about the auspicious start. “This is a jewel,” Cyrus admits at the end.

Cyrus hasn’t always shared fond memories of her Hannah Montana days, but looks like her newly evolved sound and perspective are giving her a chance to relive her childhood glory with no hard feelings. Watch her get nostalgic, above. 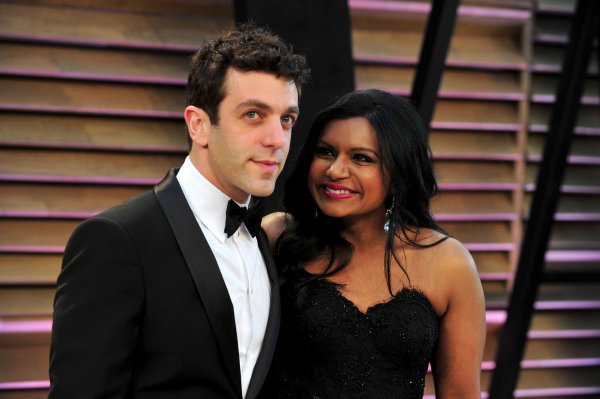 10 Reasons Why Mindy Kaling and BJ Novak's Non-Relationship Is Relationship Goals
Next Up: Editor's Pick