A top cleric of the Russian Orthodox Church and ally of Russian President Vladimir Putin met privately with Vice President Mike Pence Thursday morning and urged the U.S. to cooperate with Russia to combat terrorism in the Middle East.

“It is only one united, international anti-terrorist coalition which can combat terrorism and win,” Hilarion told TIME during an interview in a suite at the Trump International Hotel in D.C., a few blocks down Pennsylvania Avenue from the White House. “The two countries should put these political differences aside.”

A White House spokesman confirmed Pence’s meeting with Hilarion and said the cleric’s comments also reflected President Trump’s views. Additional religious leaders were also present backstage. Hilarion says that after talking with Pence, he feels “very positive” about the future of the relationship between the U.S. and Russia.

Last month, the White House accused the Russian government of covering up the Syrian regime’s role in a chemical weapons attack that killed dozens of people in a rebel-held town. In response to the attack, the U.S. launched a military strike on a Syrian airfield. Putin, who has backed Syrian president Bashar al-Assad, condemned the strike.

“The situation in Syria is indicative of the different approaches of America and Russia,” Hilarion says. “Any change of political regime could be implemented after the terrorists are expelled from the country.”

Pence addressed Graham’s summit on Thursday morning. He told the crowd that the topic of violence against Christians was of “enormous importance to this administration,” and called ISIS guilty of “genocide against people of the Christian faith.” Hilarion says he found Pence’s speech “exceptional,” and expects to meet with Putin when he returns home to discuss his conversation with Pence.

The backstage conversation was two years in the making. In late 2015, as refugees fled the war raging in Syria, Graham huddled with Hilarion at the cleric’s home in Moscow. By the fireside, they brainstormed a global conference to raise awareness of violence against Christians in the Middle East—“the most burning issue of our time,” Hilarion says. Graham also met on that trip with Putin, who promised he would do all he could to help their cause.

The men planned a summit to be held in Moscow. But shortly after Donald Trump won the Republican nomination for president, Graham moved the event to Washington at the Russian leaders’ suggestion.

The relationship between the American evangelist and the Russian President has been forged amid rising tensions between the two nations and as Russia cracks down on religious freedom. But Graham says the two men share a commitment to protecting Christians abroad. Putin, Graham says, sees himself as the defender of “the Christian remnant” in Syria, and Christians and other religious minorities are largely safe if they live in areas the Syrian government controls.

“America used to defend the Christians around the world,” Graham says. “We don’t do that anymore.”

Hilarion and Graham share common cause beyond protecting Christians in the Middle East. Both support Putin’s push to impose ultraconservative policies—including staunch opposition to abortion and gay rights—at a time of increasing secularization in the West.

When Hilarion addressed the summit Thursday morning, he spoke out not just against the physical violence some Christians face, but also “the curtailment of people’s rights to the public expression of their faith,” and the legalization of euthanasia and abortion in Western countries. He criticized the U.S. for its “ideology aimed at supporting sexual minorities and the propaganda of the homosexual life.” His remarks echoed Graham, who in 2014 praised Putin for protecting “his nation’s children from the damaging effects of any gay and lesbian agenda” when Russia passed a controversial anti-gay law ahead of the Sochi Olympics.

Not all evangelical leaders welcome the idea of a partnership with the Russian Orthodox Church—and, by extension, the Russian government. Last summer Russia passed a law that restricted foreign missionary work. In April, the Russian Supreme Court banned Jehovah’s Witnesses. The United States Commission on International Religious Freedom then recommended for the first time that Russia be named in the top tier of the worst international religious-freedom offenders. Even on Thursday, during the Washington summit, a Russian blogger was convicted of religious hatred for playing “Pokemon Go” in a Yekaterinburg church.

Graham’s four-day summit aims to forge new partnerships, both religious and political. Graham’s Samaritan’s Purse and the Billy Graham Evangelistic Association spent $4 million on the event, flying in some 600 participants from 136 countries. Attendees received a swag bag with a customized iPad loaded with conference materials. Select VIPs, like Hilarion, got rooms at the Trump International Hotel—not at the Mayflower Hotel a few blocks away, where nearly all conference events occur.

Hilarion is encouraged by Russia’s growing ties with U.S. evangelicals. “We will continue to work closely with the Billy Graham Evangelistic Association but also with the larger evangelical community of this country,” he says. “We have many allies.”

Update: This story was updated to include that additional religious leaders were also backstage when Pence and Hilarion spoke. 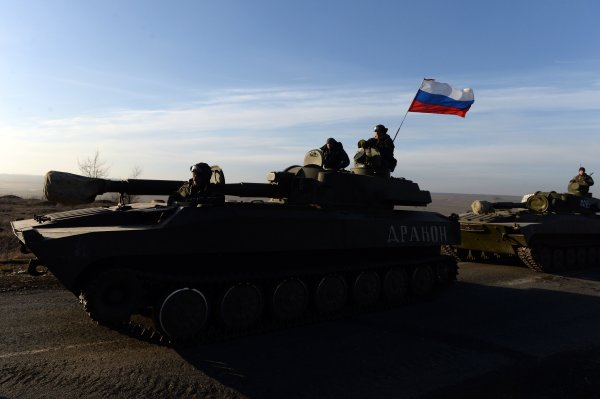