President Trump’s assertion Thursday that he had planned to fire FBI Director James Comey before receiving a memo from top Justice Department officials shattered the White House’s explanation of the events leading to the highly unusual move and exacerbated his Administration’s growing credibility problem.

Speaking to NBC News, Trump told interviewer Lester Holt that he “was going to fire [Comey] regardless of the recommendation” of Deputy Attorney General Rod Rosenstein, who wrote a memo outlining the case for Comey’s dismissal after a meeting at the White House on Monday. Trump’s comments contradicted the shifting White House account of the motive behind Comey’s ouster, and cast the narratives offered by Vice President Mike Pence and Trump’s top two spokespeople into doubt, suggesting that they either lied to reporters or were misled themselves.

The White House said on Tuesday night that Rosenstein had independently recommended that Trump relieve Comey of his responsibilities because of his mishandling of the Clinton email investigation. Trump’s remarks to NBC revealed that narrative to be a sham. With Comey overseeing a federal investigation of whether Trump’s associates were linked to Russians interference in the 2016 election, the question of motive is paramount.

The shifting story raises new questions about the White House’s assertion that Trump was acting in the best interests of the bureau, as well as whether he was getting rid of Comey to impede the Russia investigation.

Trump told Holt that Comey was a “grandstander.” During recent testimony on Capitol Hill, the former director said he was “mildly nauseous” that his handling of the Clinton email issue may have impacted the 2016 election—in Trump’s favor.

“The FBI has been in turmoil. You know that, I know that. Everybody knows that,” Trump told NBC. “You take a look at the FBI a year ago, it was in virtual turmoil, less than a year ago. It hasn’t recovered from that.”

But White House officials said Trump has eyed removing Comey since Election Day, with his determination increasing as the FBI’s Russia probe intensified.

White House spokesman Sean Spicer initially denied on Tuesday night that Trump had any involvement in Rosenstein’s decision to lay out the case for Comey’s firing. Spicer cast Trump as merely following through on the recommendation of a trusted subordinate. “President Trump acted based on the clear recommendations of both Deputy Attorney General Rod Rosenstein and Attorney General Jeff Sessions,” Spicer said in a statement.

“It was all him,” Spicer added late Tuesday. “No one from the White House. That was a DOJ decision.”

But hours later, that narrative was revealed to be false. It turned out that Trump had summoned Attorney General Jeff Sessions—who recused himself from the Russia investigation more than two months ago—and Rosenstein to the White House to discuss options for firing Comey. He directed Rosenstein to draft the memo the Administration would later use to justify Trump’s predetermined outcome.

Vice President Mike Pence echoed the narrative that it was purely Rosenstein’s decision while speaking to reporters on Capitol Hill Wednesday. “Let me be very clear that the president’s decision to accept the recommendation of the deputy attorney general and the attorney general to remove Director Comey as the head of the FBI was based solely and exclusively on his commitment to the best interests of the American people and to ensuring that the FBI has the trust and confidence of the people this nation,” Pence said.

On Thursday, the Wall Street Journal reported that Rosenstein protested to White House Counsel Don McGahn that he was bearing the brunt of the blame for Comey’s firing, when in fact Trump had made up his mind before Rosenstein got involved.

Now the White House is denying that it tried to shift the responsibility to Rosenstein. “I don’t think there was ever an attempt to the pin the decision on the deputy attorney general,” White House deputy press secretary Sarah Huckabee Sanders said Thursday.

It wasn’t the only one of Sanders’ statements about the episode that has been called into question. On Wednesday, Sanders said that “the rank and file of the FBI had lost confidence in their director.” But during testimony before the Senate Intelligence Committee, Acting FBI Director Andrew McCabe directly contradicted her claims under oath Thursday.

“Director Comey enjoyed broad support within the FBI and still does to this day,” McCabe testified.

Pressed on that testimony Thursday, Sanders said she and McCabe “may have to agree to disagree,” saying she’d spoken with “countless” FBI employees supportive of Comey’s ouster. Pressed to provide details from incredulous reporters, Sanders would not, eliciting chortles from some of the assembled press.

Sanders maintained the White House’s narrative hasn’t changed. “Our story is consistent,” she said Thursday. But just moments earlier, she admitted her prior comments about Rosenstein and Trump weren’t complete. “I went off of the information that I had,” she explained. She refused to say whether Pence was also in possession of incorrect information when misinformed reporters on Wednesday.

It was a familiar and unwelcome position for Pence, who earlier this year denied that former National Security Advisor Mike Flynn had communicated about Russian sanctions with the Russian Ambassador to the U.S., Sergey Kislyak. That information from Flynn was proven to be false, leading to Flynn’s termination—and the intensification of the very probe Trump has found so frustrating. 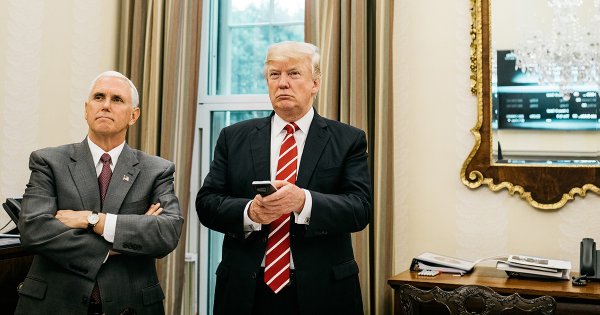