Beyond the Decisive Moment: 'The Truth Isn’t Told in a Single Photograph'

The phantom limb is a phenomenon well-known in the medical world and apparently to about 80% of the people who suffer amputations. In this most radical of surgeries the absence of a limb is not only a matter of scientific observation but is absolutely known by the patient and is clearly visible to the entire population. And yet the patient has such a strong sense of connection with the body part now gone that they feel all the sensations once associated with it and repeatedly attempt to use it for the functions it once performed. But it is only a phantom, which is defined by one dictionary as something apparently seen or sensed but having no physical reality.

Girls play an afternoon dancing game in a village outside Kabwe, Zambia. Many of the people here are subsistence farmers who grow tomatoes, cabbage, kale, and other food.
Idil Ibrahim

We all know that the film used to create photographs is now an artisanal rarity and we also know that the bionic alternative offered by digital imaging devices is something quite different. We see that imagery moves in the world in a very different way that doesn’t even pretend to mimic analog photography. We even accept Snapchat as an entertaining but ultimately mundane part of our daily lives (and our hourly lives and often even more frequently) without stopping to think how this might have been achieved in the old system.

As the consequences of the technical redesign of how images are created filter into our lives we are beginning to take some interesting early steps, albeit hesitant to put our full weight on our new limbs for fear of falling over. A book now publishing (Everyday Africa, a print rendering of the Instagram feed) offers a valuable opportunity to study this new digital phenomenon from the familiar perspective of the printed page. As we reflect on the new and the old formats of presentation we begin to see how imagery actually means something different on the pages of the family album, shared only with intimate friends on special occasions, and when it’s spewed into the world with an invitation to see and comment on the details of our personal lives. It becomes culturally transformative when multitudes of personal experiences are displayed online and these individual moments of sub-historic experience are aggregated to deliver a wholly new perspective on the world.

The Internet has become a compound eye that delivers multiple visual fragments that are received and consolidated by the viewer who reconstructs the world on a screen, creating a perspective that is at once distant and abstracted, yet assembled from details of extraordinary and authentic intimacy. This is a new perspective that was invisible to the 20th Century and its sudden arrival in the 21st has caused some confusion as people struggle to make sense of what they see using the old principle that expected every image to carry a wider significance, representing meaning beyond the precise details of each individual frame.

The Ken Fac troupe, from Kensington, marched through the streets of Parkwood before attending the final completion of the 2013 Minstrel Carnival in Athlone, Cape Town, South Africa.
Charlie Shoemaker

This was the conceptual approach made popular by Henri Cartier-Bresson whose “decisive moment” was the perfect alignment of random elements brought together in a split second to represent a larger situation. @EverydayAfrica veers sharply in the opposite direction, embracing the new, alternative perspective that uses Instagram to deliver a flow of tiny self-contained moments of little significance, which, viewed collectively across time, accumulate to deliver a very different form of truth.

Of course, the photographic traditions of the 20th Century retain their value not only as a symbolic representation of larger situations, but also as evidence and witness to distant events that must be seen and remembered in forensic detail. But this familiar function has been expanded to include wider, even more profound values that inform a deeper, maybe more realistic understanding of the world and our place in it. The very casualness of the incidental observations made on mobile phones releases the viewer from the constraints of a story that has been self-consciously sculpted by a photojournalist to fit a preconceived version of reality.

Think of the 20th Century photojournalist as a sculptor who chips the stone away to reveal a figure that is preconceived in their mind; this is the same process that’s applied by a traditional photographer who moves in to frame the subject, removing extraneous information in order to isolate their vision of a situation. The deliberate decision to be in a particular place at a particular time, the choice of lens, angle and light source all represent decisions not to include other perspectives; exclusion is a necessary part of the process.

Ginika is on her way to join thousands of Nigerian law graduates called to bar in Abuja, Nigeria.
Tom Saater (@tomsaater)

A strange inversion occurs with the casual style of observation typically made on a mobile phone: phone imagery tends not to emphasize searched-for constructions or preconceived frames (those bricks in the wall of a predetermined narrative) but instead includes all the random information that was previously excluded in the careful composition of a professional’s viewfinder. The mobile phone has become the instrument for a different approach to image making, expressing a reactive delight in unexpected discoveries, maybe more like grazing than the purposeful hunting of 20th Century photography. Eventually as these scattered observations accumulate, a profound truth emerges which although comprised of individually insignificant moments aggregate to deliver a raw and unfiltered perspective, the antithesis of the carefully composed, self-consciously significant and highly selective edit that is the world of photojournalism.

Approaching @EverydayAfrica with misaligned expectations is disconcerting, much like looking through a telescope from the objective lens instead of the eyepiece. “Where did everything go?” It’s as though the familiar Africa represented in northern journalism has been wiped away. There is a real danger in this frustrated expectation, which is revealed in the anguished comments of Instagram viewers seeking to impose old world order on new world imagery. A child bathing in a puddle must represent poverty and can’t only be seen as a specific child’s enjoyment as they play in water (which understood as a detail of individual experience is common to rich and poor around the world).

Our perspective has been so distorted by decades of strictly formatted media reporting on Africa that sometimes we can no longer see what we’re looking at. The use of stereotype to tell the story of many by telling the story of a single symbolic figure has bred a blindness to the individual, and the legacy of this media trope is a confused tangle of conflicting perceptions. Individuals are obscured as they are seen to represent the lives of others, and significant social issues can be overlooked because the expected symbols of stress and distress may not be immediately obvious in the routine activities of an individual who’s been stripped of symbolic cues.

It takes careful study to find refugees in @EverydayAfrica coverage, or to identify the distress of unemployment, or the impact of HIV, homelessness or homophobia, but it’s all here amidst the wedding anniversaries, shopping lines and bathers. Stress and distress mingle with joy and fulfillment because they are embodied in the same people. The limitation of traditional reporting has been to assign a single role to each individual, whereas in life, as we live it, we know many roles.

@EverydayAfrica lives on the Internet as an Instagram feed with all these experiences existing side-by-side in a curiously confused yet coherent narrative with neither beginning nor end, looking much like life itself. And, like life, it’s full of contradictions, inconsistencies and incongruities, sometimes confusing us and frustrating our expectations while also amusing us with whimsical twists and exuberant shenanigans. Delighting in the moment, each online image defies memory, existing instead only in the present as part of the endlessly rolling river of Instagram impressions. Each new post is carried down the river, soon out of sight and out of mind, an unusually titillating flotsam that stays with us only long enough for a quick “Like” or hashtag before the next provocation arrives in sight.

In this new form of reporting, the truth isn’t told in a single photograph and what we learn isn’t stored in memory in the form of an isolated icon, but instead we feed our understanding with a continuous scroll of updates. Maybe none of these images will live in our memory but over time each one will add a little understanding, contributing to a more fluid and responsive form of knowledge that evolves with changing circumstances. The power of the iconic image to fix information in our memory is both its strength and its weakness. At best a single symbolic photograph can only be an incomplete interpretation of experience that over time will take its place in memory, replacing experience with only fragmented splinters.

A photograph is like a frozen fountain that “remembers” a moment of fluid ambiguity as a hard and certain fact and as such is necessarily a distortion. By releasing a photograph from this role as a document of memory and instead letting it flow downstream to obscurity we retain an ever-evolving awareness even as specific factual details diminish.

A young Congolese refugee in Goma, Democratic Republic of the Congo. I was impressed by the look of her hair. @leyuwera1
Ley_Uwera (@leyuwera1)

Relaxed study of the Everyday Africa book reveals something else being played out in the images and comments scattered across the African continent. We see the early stages of a transition to a new form of journalism. The surprise and the irritation in many of the comments left by Instagram viewers reflect an audience that is moving out of its comfort zone. They’re sufficiently curious to find @EverydayAfrica and in the context of Instagram’s universe of hip, cool lifestyles it’s to be expected that some viewers will be disconcerted by an unfamiliar perspective. Alongside and intermingled with these voices are the comments of another group moving into a new space: the photographers and other participants in the everyday life of Africa.

The tone here is partly of patient education, offering insights to confused commentators, and partly of alert curiosity as they exchange information about regional variations in such details as the name given to second-hand clothing. The thread of curiosity runs through everything and binds all viewers from all backgrounds in a shared exercise that reaches beyond the continental coast and touches the delicate but determined pulse of new journalism, a new way of understanding the world. Information can be shared and discussed instead of being imparted from on high; information can be contradictory because little in life remains fixed for any period of time; and most importantly information changes as we change perspective.

With all of this wrapped between hard covers, Everyday Africa makes a simple but emphatic statement: the truth is rarely pure and never simple, and we do ourselves a disservice by allowing others to distill complicated reality into easy summaries. It is our responsibility to look, think and learn. 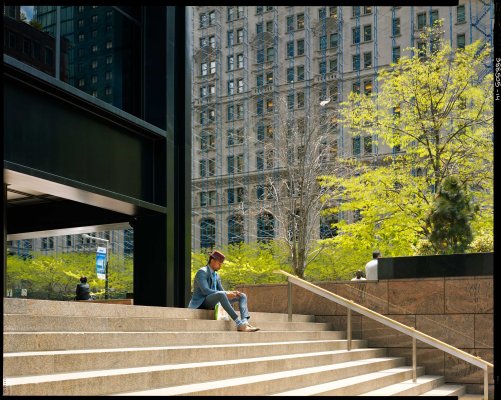 From New York, With Love: Raymond Depardon Returns to the City That Never Sleeps
Next Up: Editor's Pick