Acting FBI Director Andrew McCabe disputed White House claims that rank and file members of the Federal Bureau of Investigations had “lost confidence” in former Director James Comey. McCabe said it is not accurate to say that rank and file did not support Comey while testifying before a Senate panel on Thursday.

“Director Comey enjoyed broad support within the FBI and still does to this day,” McCabe said in response to questions at a hearing before the Senate Intelligence Committee. “I can confidently tell you that the majority, the vast majority of FBI employees enjoyed a deep and positive connection to Director Comey.”

White House Principal Deputy Press Secretary Sarah Sanders said Wednesday that President Trump was moved to fire Director Comey because a swath of people within the federal government had lost confidence in his ability to lead.

McCabe’s statements at Thursday’s hearing threw water on that explanation from Sanders. McCabe told Senators that he has personally worked closely with Director Comey throughout his career at the FBI and holds him in high regard.

“I worked very, very closely with Director Comey,” McCabe said. “I can tell you that I hold Director Comey in the absolute highest regard. I have the highest respect for his abilities, his integrity, and it has been the greatest privilege and honor of my professional life to work with him.” 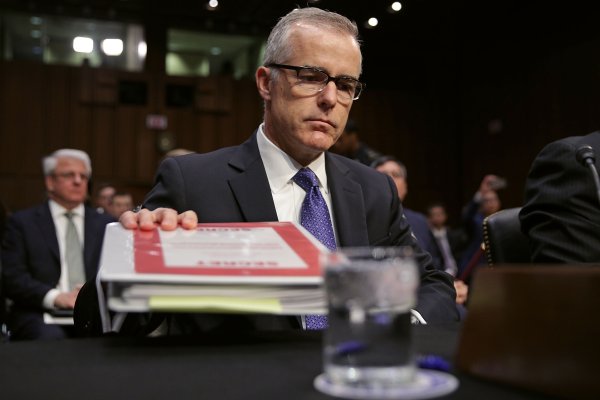 Acting FBI Director: 'No Effort to Impede' Investigation Into Russian Meddling
Next Up: Editor's Pick