Director of the Federal Bureau of Investigation, James Comey testifies in front of the Senate Judiciary Committee during an oversight hearing on the FBI on Capitol Hill May 3, 2017 in Washington.
Zach Gibson—Getty Images
Ideas
By Michael German
German, a fellow in the Liberty & National Security Program at the Brennan Center for Justice at NYU School of Law, served for 16 years as a special agent with the FBI, specializing in domestic terrorism and covert operations

Mourning over the state of our republic is a reasonable response to President Donald Trump’s unceremonious canning of the FBI Director. But shedding tears for James Comey shouldn’t be. The timing and nature of the dismissal adds to the growing pile of evidence that the Trump Administration presents a clear and present danger to the rule of law, but Comey’s willful and repeated divergence from Justice Department policies deserved sanction, Trump’s questionable agenda aside. The now-former FBI Director’s actions may have tipped a presidential election and cast a cloud of illegitimacy over this government, a possibility only made worse if he also inadvertently assisted a hostile foreign nation in accomplishing the same goal. Though he claims this possibility mildly sickens him, he just last week vowed he would do it all again, even knowing what he knows today.

Those convinced the FBI Director was somehow finally on course to sink the Administration he helped bring to power are ignoring the facts and hoping against all reason. The available evidence suggests Comey’s FBI may not have pursued alleged Russian collusion with the Trump campaign with the necessary urgency, at least if you believe that a hostile foreign nation’s effort to influence a U.S. presidential campaign presents a national security threat of the highest dimension.

This week, former Director of National Intelligence James Clapper confirmed the substance of a Guardian report that British intelligence services had warned the U.S. in late 2015 that Russian intelligence operatives were engaged in suspicious “interactions” with Trump associates. Similar warnings from other nations followed. Yet the FBI did not open a counter-intelligence investigation on the allegations until late July of 2016. The FBI knew Russian intelligence operatives targeted Carter Page for recruitment in 2013. Trump named Page a campaign foreign policy adviser in March 2016, and Page traveled to Russia in early July. Yet the FBI did not seek a secret Foreign Intelligence Surveillance Act wiretap order until after Page was no longer associated with the campaign. Contrary to his public discussions of the Hillary Clinton investigation, Comey refused to sign the FBI onto a collective intelligence statement issued by the DNI that declared the Russian government’s hacking operations were meant to interfere with the election.

The investigation does not appear to have accelerated since the election, either. According to testimony by former Deputy Attorney General Sally Yates this week, the FBI became concerned about General Michael Flynn’s unapproved contacts with Russian agents when he was advising Trump, but did not question him about this “underlying conduct” until he was sworn in as National Security Advisor. Yates indicated Flynn was less than truthful in this interview, triggering an emergency meeting to warn the incoming White House counsel. Providing false statements to the FBI is a federal crime, yet no immediate action has been taken to prosecute him or other administration officials who provided false or incomplete statements regarding their interactions with Russian government officials. The delay has given Flynn and others the opportunity to amend their financial disclosure and security clearance forms, as well as “clarify” sworn testimony, potentially muddling any future prosecutions.

The delayed initiation of the Trump/Russia counter-intelligence investigation is mirrored by the FBI’s nonchalant response to evidence the Russian’s were hacking the Democratic National Committee computers. The Bureau learned of the cyber-attacks in September 2015, but only gave the DNC “help desk” a tepid warning to check its servers. DNC officials claim the FBI did not advise them that Russian intelligence was behind the hacking, and the DNC did not begin to recognize the severity of the threat until late April 2016, after the damage was done.

Of course, the suggestion that the FBI Director’s dismissal resulted from his mishandling the Clinton investigation is belied by Trump’s reference to the Russia investigation in the Comey termination letter. This was a “tell” a more competent White House operation would have avoided. But to the limited extent anyone can believe Trump’s claim that Comey told him three times that he was not “under investigation,” such communications would be serious violations of Justice Department policies designed to ensure FBI investigations are free from political influence. FBI officials are prohibited from discussing pending cases with White House staff, particularly if they are potential subjects.

Notably, this isn’t the first time that the White House claimed to speak with Bureau officials about this investigation. According to White House chief of staff Reince Priebus, FBI Deputy Director Andrew McCabe (now the FBI’s Acting Director) approached him at a February briefing to assure him that a recent New York Times report about the Trump/Russia investigation was factually incorrect. Preibus followed up this inappropriate contact with a phone call with McCabe and Comey to request the FBI push back against these reports. While Comey made the right decision to not issue a public statement, the White House claims Comey and McCabe authorized Priebus to cite “senior intelligence officials” in denying the report.

What is clear in this sordid mess is that the American public deserves better. We deserve to know that investigations are based entirely on objective evidence and are free from political influence of any kind. The only way forward is the appointment of an independent special prosecutor sufficiently staffed to take the investigation of alleged Russian influence with the Trump campaign to its logical conclusion as quickly as possible. Recent claims that Comey requested more Justice Department resources for the investigation shortly before his firing only increase the need for new leadership.

Congress, too, must conduct a thorough, public examination of all the facts surrounding Russian meddling in the election, including the decision to fire Comey. And they must hold the intelligence agencies accountable. We spend about $70 billion per year on an intelligence apparatus that is created to protect us from hostile foreign threats to our democracy, and it failed. Congress needs to conduct a comprehensive, bi-partisan review of all intelligence policies and practices to ensure they are efficient, effective and compliant with their constitutional obligations. Seventeen former staff members of the Church Committee, which conducted the last such examination in 1975, provided a blueprint for this approach in the 2015 report, Strengthening Intelligence Oversight. As Supreme Court Justice Louis Brandeis suggested, sunlight is the best disinfectant. 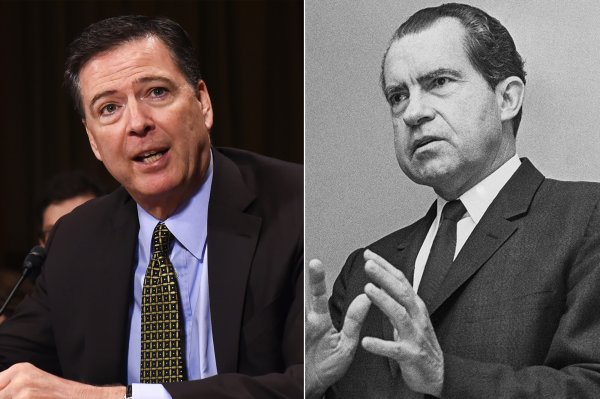 Why Everyone Is Comparing James Comey's Firing to Richard Nixon
Next Up: Editor's Pick