Sen. Ben Sasse, R-Neb., is seen in the Capitol's Ohio Clock Corridor after a vote in the Senate where they invoked the "nuclear option" which allows for a majority vote to confirm a Supreme Court justice nominee, April 6, 2017.
Getty Images
By Michael Scherer

“I’m pretty certain the President is never mentioned at any point in this book,” Sasse, a Republican, told me when I asked him about Donald Trump as we recently sat outside a café a few blocks from the U.S. Capitol. “I want to move upstream from politics to have that conversation about all the things that we should want for our kids.”

But jump-starting a postpartisan national conversation about what the nation should want for its children is exactly the sort of thing someone who is looking to run for President might do. And the solutions that Sasse proposes are, in many cases, precisely the opposite of the examples set by Trump or Hillary Clinton, both of whom Sasse has criticized for failing to behave like “you know … an adult.”

For Sasse, emotional and intellectual maturity is a lockpick for the nation’s future. He speaks of an American crisis of loneliness and disconnection; he calls for parents to take back responsibility for their children’s upbringing from schools and for children to resist consumerism, travel widely, work hard and “become truly literate,” with a reading list that resembles a graduate-seminar syllabus. His personal canon contains unexpected choices for a conservative Republican: books by Aldous Huxley, Ralph Ellison, James Baldwin and Karl Marx, along with Augustine and Alexis de Toqueville.

In fact, Sasse’s book is filled with entire paragraphs that read like thinly veiled rants against Trumpism. Sasse, a fitness nut known for sometimes doing 10,000 push-ups a month, may not name-check the current President, but Trump haunts Sasse’s hip vision for a 21st century Puritan idealism. This is a serious book, if imperfectly formed, meant to wrestle honestly with big ideas. But then Sasse is not an ordinary sort of Senator. He boasts degrees from Harvard and Yale, and he has spent time working for the U.S. Department of Justice. He was also the president of Midland University, a Lutheran school west of Omaha.

He is the only sitting Senator who has driven for Uber on the weekend as a way of researching the sharing economy. “If you are an Uber driver and somebody pukes in your car, you get 150 bucks,” he helpfully advises. “Which is a pretty great market mechanism.”

Sasse says he began thinking of writing this book years before Trump came onto the scene. One inspiration, he says, is a group of Midland students who were tasked with setting up and decorating the school’s 20-foot Christmas tree. When they were done, a school administrator noticed that they had put ornaments on the bottom eight feet only. “We couldn’t figure out how to get the ornaments on the top,” one of the students explained.

To fight this sort of helplessness, which he attributes to modern upbringing, Sasse has detailed a program of basic learning that he implores the nation to adopt: turn off the television, and keep your kids away from phone screens. “I am critical of the digital addictions of consumerism generally, and digital consumerism on top of it,” he told me. “Because I think kids are being deprived by not learning how to work as teens.”

His own family of five–his three children are nicknamed Peach, Crash and Dogman–aims for a full hour each night when everyone stays in the same room, with books and musical instruments. If Sasse does move forward with a run for the White House in 2020 or ’24, he will have laid the groundwork to run as something of a lifestyle and career coach for Generation X. He certainly speaks the language of a coming backlash against partisanship. “These political parties aren’t very interesting,” he says. “A lot of people think that maybe they should find their meaning in politics. They’re going to be let down.”

Does that sound like a campaign slogan? Sasse’s eighth-grade teacher has said that Sasse declared in class that he would go to an Ivy League school and become President. When I ask whether he is still on track, Sasse offers a pitch-perfect dodge.

First of all, Sasse says with a laugh, he doesn’t think Mrs. Murphy is known for her fortune telling. “Second of all, that kid sounds like a real moron. Third of all, I have no doubt that I as a hyperactive kid probably had a new vocational plan every seven minutes. I live on a river in Nebraska, and I have little kids, and I have an awesome life, minus the fact that I commute five days a week. I have the only job I want right now, which is serving Nebraskans and raising kids on the road.” 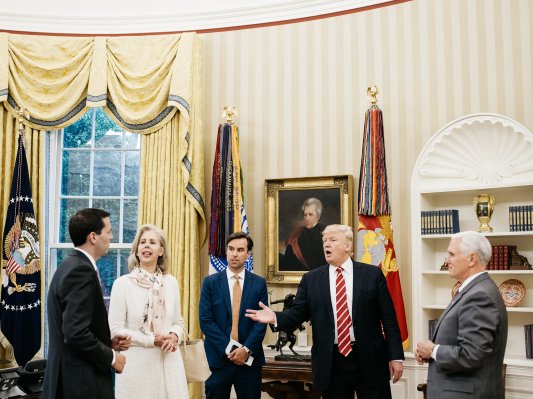 Read Trump's Interview With TIME on Being President
Next Up: Editor's Pick