The Wave to Come

Paris rejoiced as Marine Le Pen fell short in her bid for the French presidency, but nationalism is far from defeated
Thomas Dworzak—Magnum Photos
By Ian Bremmer

When the storm turns out to be less severe than the warnings, there’s always a sigh of relief–and maybe a bit of over-confidence after the fact. If fans of the European Union felt better after populist Geert Wilders came up short in the Dutch elections in March, they also took heart from the absence of anti-E.U. firebrands among the leading contenders for this fall’s German elections. Then came May 7. The victory of Emmanuel Macron over Marine Le Pen in France’s presidential elections signaled that “the season of growth of populism has ended,” Antonio Tajani, president of the European Parliament, said on May 8.

Not so fast. Europeans will soon remember that elections are never the end of anything–they’re a beginning. And whether the issue is unelected Eurocrats’ forcing voters to abide by rules they don’t like or fears that borders are insecure, there are good reasons to doubt that the anti-E.U. fever has broken. France’s Macron now faces powerful opposition on both the far right and the far left. Hungary and Poland are becoming increasingly illiberal. Brexit negotiations are getting ugly. And resentment toward the E.U. is still rising throughout Europe.

In the U.S., President Donald Trump may be pushing what increasingly resembles a traditional Republican agenda, but polls show that his supporters are still eager for deeper disruption. Trump’s embrace of Turkey’s Recep Tayyip Erdogan, Egypt’s Abdul Fattah al-Sisi and the Philippines’ Rodrigo Duterte suggests a lasting affinity with aggressive strongmen. His chief adviser and nationalist muse, Stephen Bannon, may be under fire, but he’s still there. The Trump presidency has only just begun.

In short, nationalism is alive and well, partly because the problems that provoked it are still with us. Growing numbers of people in the world’s wealthiest countries still fear that globalization serves only elites who care nothing about nations and borders. Moderate politicians still offer few effective solutions.

Now here’s the really bad news: an even larger crisis is coming. The popular fury convulsing Europe and the U.S. may well spill over into the rest of the world. Just as the financial crisis, which began in the West, produced rumbling aftershocks around the globe, so the nationalist explosion will rattle the politics of countries on every continent. Leaders in China, India, Brazil and others will face unprecedented challenges in managing this threat.

The emergence of a truly global middle class is one of history’s great success stories: more than a billion people have been lifted out of poverty, literacy rates have surged, and access to education and health care is now widespread. But this vast rising tide did not lift all boats, and those left behind are not happy. The headlines have all been about reaction in the West, where globalized trade has hit manufacturing and technological changes have transformed the workplace. Jobs are being eliminated, and the world’s original middle classes are shrinking. The native-born resent immigrants seeking work, and in Europe, the debt crisis plunged some countries into austerity and others into stagnation just as the surge of Middle Eastern refugees fed fears of crime, terrorism and loss of national identity.

Now some of the same storms are making landfall in the developing world, where governments and institutions are far less equipped to handle the stress. We’ve already seen the first chapter of this narrative with the quakes that have rocked the Arab world over the past seven years. Along with a crisis of governance, inequality and connectivity have played leading roles in these dramas as citizens become both better aware of how far they’re falling behind and more able to organize protests about it.

The Gini coefficient, a statistical measure of income inequality within countries, finds that the gap between rich and poor is moderately high in places like Russia, Turkey and Indonesia, and yawning in China, Brazil, Mexico and Saudi Arabia. As lower-income citizens in these countries become more aware of what they’re missing–decent housing, education, work opportunities, health care and protection from crime, in particular–the risk of unrest will rise. We’ve already seen previews of this in Brazil and Turkey, where millions of angry people have filled city streets to protest corruption, abuse of power and lousy public services in recent years. What happens when technological change in the workplace guts the new middle classes in developing countries like China and India, where government is held more directly accountable for the creation of jobs? What about Iran and Saudi Arabia, countries with fast-expanding populations of young people with fewer jobs created? In the Middle East, over 40% of the population is under 25. Can economies there create enough jobs to sustain them? For hundreds of millions of people across the developing world, a slide back into poverty is a fear that’s easy to visualize.

Then there is the question of identity politics. Globalization doesn’t move just goods and services. It moves people, feeding public anxiety by shifting the racial, ethnic, linguistic and religious makeup of communities, sometimes abruptly. Trump rose to power in part by leveraging fears about immigrants’ stealing American jobs. Immigration was also at the heart of the Brexit vote. Developing countries don’t have to worry about waves of migrants knocking at the door in search of a better life, at least not yet. But in many of these countries, “they” are already inside or live just next door. Even in countries with unchallenged boundaries, racial, ethnic, tribal, religious and linguistic differences can become fault lines when technological change creates economic turmoil. Political opportunism is universal.

In the West, nationalist politicians have seized the opportunity created by popular anger to boost their influence. But the structures that create stability in the West have proved to be resilient. Trump is still discovering the meaning of checks and balances. And majority rule kept Le Pen and Wilders out of power.

What happens in countries where these institutions are weaker and have less popular legitimacy? Expect similar figures to emerge–but with results that are even harder to predict. Nationalists rise to power by convincing citizens that they can defend “the people” against a predatory elite and the favored groups they protect. But the hated “them” isn’t always a domestic enemy or someone still hoping to come inside. If the leaders of Turkey, Iran, Saudi Arabia, Egypt, Russia and China can’t help their citizens compete in a 21st century globalized economy, where might they look for culprits? In the past, governments have steered public anger toward other countries, which can easily turn into military conflagrations.

Others will respond to nationalist pressures by building walls. Some of these barriers will be between the state and their subjects–China’s government has taken steps to create a “social-credit system,” a sort of credit rating based on economic and social behavior that determines the opportunities available to a person. Beijing claims the plan is intended to create a harmonious society and a “culture of sincerity,” but it might also serve as a barrier between the ruling party and angry citizens. In India, the government has gathered biometric information on more than 900 million of its citizens for its controversial national identity-card program. There’s no telling how future governments will decide to use this great trove of data; the potential for surveillance is enormous.

Information, if tightly controlled, can divide. The Russian state dominates the television channels and websites from which the vast majority of citizens get their news. Since last July’s failed coup, Turkey’s Erdogan has used a state of emergency in his country to tighten media controls and punish outlets critical of his government. Then there’s the assault on information itself. The fake news that appeared on the Internet during the U.S. presidential election has long been standard fare in less open societies.

These kinds of barriers may be the future in a world that was until recently described as increasingly borderless. People will gravitate toward online enclaves of information and ideas, creating virtual walls between left and right, urban and rural, different ethnic and religious groups, the religious and the nonreligious. Between “us” and “them.”

How can we bridge the gap? Some governments are experimenting with solutions. Finland is addressing the changing workplace with a concept called guaranteed basic income. As part of a trial, it is sending monthly tax-free payments of about $600 to 2,000 unemployed citizens chosen at random. The recipients will continue to receive the payments even if they find work. The assumption behind the project is that future work is far more likely to be part time or self-employment–and that the unemployed are reluctant to take these sorts of jobs if they lose welfare benefits as a result. The opportunity to make more money in part-time jobs, it is hoped, will attract people receiving the guaranteed basic income, and their spending power will stimulate growth. Welfare bureaucracies will be cut, because there will be no need to maintain complicated databases to track the continuing eligibility of participants.

Local governments in Canada, the Netherlands, Scotland and Oakland, Calif., are reportedly planning to experiment with this idea. (The Swiss voted last year to reject it.) If the guaranteed-income idea seems antithetical to an American work-ethic-driven culture, consider that President Richard Nixon proposed a modest version of the basic income idea in the late 1960s. Other ideas are also out there. In Singapore, for example, government has created “individual learning accounts” to provide every citizen over 25 with money to spend on educational training.

There will be many more such experiments as governments search for ways to rewrite the social contract to ease inequality. But the effort demands capable governance and the resources to construct and sustain the transition to a new world. Where those do not exist, solutions are much harder to come by–and darker alternatives beckon: to increase control, to suppress instead of liberate and to lash out at reliable enemies.

Dealing with the forces that drive populism is no easier than dealing with the forces that drive climate change, and they are all too easy for political leaders to avoid. But ignoring either trend will produce an overheated world and rising tides. That’s why, no matter what headlines you may read this spring about the triumph of globalists over nationalists, the truth is that we’re all in this together. 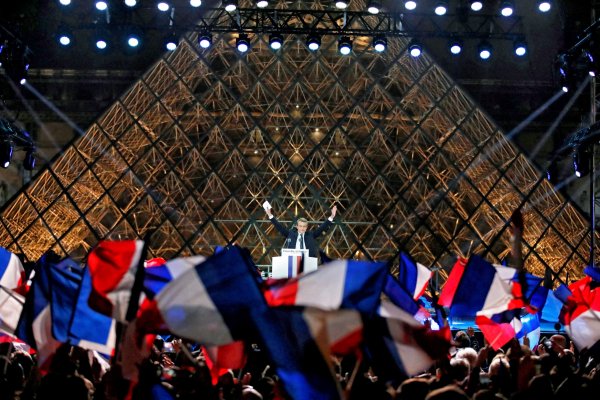 France's Youngest Leader Since Napoleon Takes the Stage
Next Up: Editor's Pick