The Story Behind TIME's White House Cover Shoot With Trump

By Olivier Laurent
Photograph by Benjamin Rasmussen for TIME

When photographer Benjamin Rasmussen learned that, along with TIME’s reporters and editors, he would get a tour of the White House and the residence with President Donald Trump as his guide, he turned to an unlikely resource to plan: Gay Talese’s celebrated profile Frank Sinatra Has a Cold. “The whole premise is that Frank Sinatra will not give access to Gay Talese, so he’s having to figure out how create this sense of him without actually being able to interview the man,” he tells TIME. “I was thinking a lot about that idea: ‘How do you give a sense of this person in this space that represents, for the country, leadership and, for him, where he lives.”

Read TIME’s cover story: After Hours in the White House

In an interview, Trump defined the White House as a sort of shelter – a cocoon. Rasmussen wanted to convey this sense of regal seclusion in his photographs. “What does it mean to be in space where you’re making some of the most decisions in the world but can’t leave [because] you’re physically surrounded by people who are telling you that they hate you, that they disagree with you and that they think you’re doing a bad job,” he says. “Regardless of what you think of his politics, it feels like a really lonely position.”

President Trump in the Grand Foyer of the White House, Washington, D.C., May 8, 2017.
Benjamin Rasmussen for TIME

To get that message across, Rasmussen chose to shoot for the mid-tones, giving his images a bit of warmth without drama. “I chose to embrace, to use the light that he’s using when he’s existing there as my main light,” he says, choosing to maintain a “level of formality with everything very straight and very strict.”

Trump can also be a tough man to photograph – he prefers one profile to the other and tends to favor certain fixed facial expressions. Rasmussen knew all that ahead of time, but he still struggled to create a documentary-like depiction of the day’s events. “I was trying that consistency throughout the shoot as we were moving so insanely fast. Most of it was shot in 10 to 15 seconds bursts,” he says. “It’s the most difficult shoot I’ve ever done.”

Benjamin Rasmussen is a photographer based in Colorado. 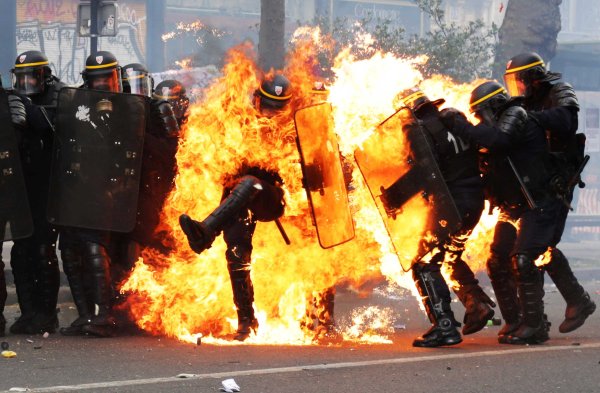 The Story Behind the Viral Photograph of a Policeman on Fire
Next Up: Editor's Pick