Hunting for Elusive Answers in the Fort Hood Shooting

War returned to Fort Hood on Wednesday night, for the second time in five years. True, it wasn’t the big, official wars like those in Afghanistan and Iraq, but apparently another grudge held by an angry Fort Hood soldier who elected to take matters into his own hands, with his own gun.

What, other than the sprawling central Texas post, links the shootings carried out by Wednesday’s gunman, who killed three and injured 16, and Major Nidal Hasan?

“On hearing this terrible news, it’s hard not to be reminded of the 2009 shooting at Fort Hood,” says Kenneth T. MacLeish, who wrote Making War at Fort Hood: Life and Uncertainty in a Military Community, in 2013. Hasan killed 13 and wounded more than 30 in November 2009, and has been sentenced to death.

“That event was a terrible and traumatic one for the people I knew there,” says MacLeish, an assistant professor at the Center for Medicine, Health and Society at Vanderbilt University. “But it was also sadly paradoxical that it was only with an exceptional event like the Hasan shooting that national attention came to this place that had lived for years, and continues to today, with the stresses and burdens of the ongoing wars in Iraq and Afghanistan—undertakings to which it and its inhabitants are central.”

Fort Hood’s 50,000 troops have rotated between their homes in Texas to Afghanistan and Iraq for more than a decade, with all of the stresses and strains that implies for soldiers and their families. Shortly after the Hasan killings, the post’s mental-health professionals were conducting more than 10,000 mental-health sessions a month. “Normal will never be normal again,” retired Chief Warrant Officer 3 Christopher Royal told the Kileen Daily Herald last November, four years after Hasan shot him in the back.

Army officials said Wednesday’s gunman, who House Homeland Security Committee Chairman Michael McCaul (R-Tex.) identified as 34-year-old Iraq War veteran Ivan Lopez and who officials said had been suffering from depression following a four-month tour in Iraq in 2011, recently bought the Smith & Wesson handgun he used. The married soldier had complained of suffering a traumatic brain injury during that deployment, and was taking medicine to ease his depression and anxiety.

Wednesday’s attack combined all the horror of the rampage carried out by Hasan, an Army psychiatrist—plus the finality wrought by the new gunman’s suicide, carried out during a final showdown with a military policewoman.

“When the shooter has suicided, especially if there is no suicide note, motives can be hard to ascertain,” says Elspeth Ritchie, a former Army colonel who retired as the service’s top psychiatrist in 2010. “The combination of anger and easy access to weapons is an potent witches’ brew to mass shootings.”

While Hasan’s killing spree could be linked to his warped view of Islam, Lopez’s actions seemed rooted in a work-related grievance associated with his job as a truck driver. That led to an argument that climaxed with him shooting fellow soldiers before taking his own life.

“I’m heartbroken by the tragedy at Fort Hood,” one-time Fort Hood wife Rebecca Morrison says. “Having lived through the shooting in 2009, and having lost my husband to suicide in 2012, I know the pain and fear.” Her husband, Ian, was a West Point graduate and AH-64 Apache helicopter pilot who killed himself in their off-post home in 2012, shortly after returning from Iraq. “I grieve for the families who lost loved ones, as well as for the soldier who was in such distress that he felt this was his only option,” says Morrison, now working for the nonprofit Tragedy Assistance Program for Survivors, where she helps military families cope with suicide. “I pray that our government recognizes the stressors placed upon our military and cares for their emotional wounds.”

The Fort Hood shooting marks the third such case in the past six months. In September, a Navy contractor opened fire at the Washington Navy Yard, killing 12 and wounding four before being shot dead by police. Last month, a civilian shot dead a sailor aboard a ship at the Norfolk, Va., Navy base.

Following the Navy Yard shootings, Hagel ordered toughened security at military facilities and a renewed emphasis on “insider threats.” The Pentagon took similar steps following the first Fort Hood shooting. “There was a concerted effort to identify risk factors for violence,” Ritchie recalls. “Unfortunately many screens relied on self-reporting, and few will admit to plans to blow other Army soldiers away.”

Death has been a frequent visitor to U.S. military posts in recent years. Beyond the 6,600 killed in Afghanistan and Iraq, a sharp hike in military suicides has killed hundreds more annually. Princeton University Press, the publisher of MacLeish’s book, said it “shows how war’s reach extends far beyond the battlefield into military communities where violence is as routine, boring, and normal as it is shocking and traumatic.”

But MacLeish urged caution in linking this kind of violence to mental illness. “Such connections, made quickly or without reflection, risk wrongly portraying mentally-ill persons as sources of violence, and soldiers as potential threats to those around them,” he says. “While particular details of some mass shootings may seem to justify such assumptions, on the whole the connections between mental illness and mass violence are slim to nonexistent, as are those between war-related stress and mass violence.”

Fort Hood, he says, deserves better. “If we truly care about soldiers and others suffering the effects of war, we need to put aside the stereotypes of unhinged veterans that pop culture and ‘common sense’ offer us, and actually listen to the experiences of those in pain,” MacLeish says. Following Wednesday’s horror, he adds, “the latter will certainly include more soldiers, workers and military families at Fort Hood.” 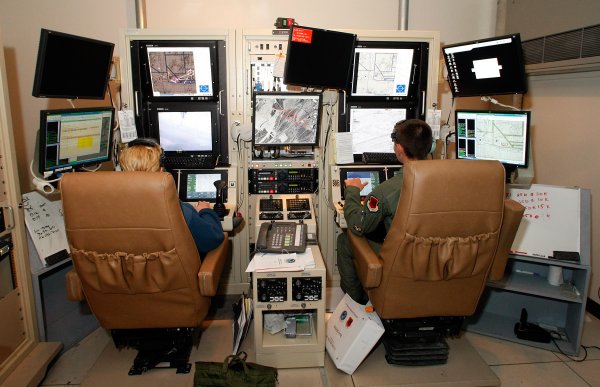 U.S. Working to Preserve Drone Dominance
Next Up: Editor's Pick