Sophie Turner: I Want Sansa Stark to Have ‘More Kills’ on Game of Thrones

Sansa Stark has joined the action on Game of Thrones — and the actor who plays her is thrilled. “I’ve been waiting for so long to have my first kill,” Sophie Turner tells TIME. Last season, she got her wish, ending the life of her tormentor in a scene that augured a new attitude. (Such violence is more common for Arya Stark, played by Turner’s bestie Maisie Williams — the pair, says Turner, are “so incredibly close that a lot of people think we’re dating.”)

Sansa’s bad education has had yet uglier chapters; Turner addressed the controversial rape scene in Thrones’s fifth season, calling it a conversation-starter about real-world assault. “It is mainstream. So it would almost be an injustice for us to ignore,” she says.

Turner spoke to TIME in March for our cover story on Game of Thrones, whose seventh season premieres July 16; here’s an edited transcript of that conversation.

What has it been like to play a character whose intelligence has evolved? I don’t know that anyone would have suspected Sansa would grow up to be quite such a player in the game.

It’s been really fun to play. She’s kind of the underdog, and you don’t expect her to develop and adapt as well as she has. To be able to play someone who kind of seems like a useless player in the game and kind of unassuming — the words used to describe her most are spoilt, typical teenager. It was really exciting to see the progression for her and to see the arc they’ve given her: Just a complete sponge and constantly learning from all the people she’s been around and making the most of these situations where she’s been a captive. Instead of resenting her captors and turning against them, she uses them to her advantage and really plays them so she can get the most out of this time she spent with them.

Similarly, I imagine you soaked up a great deal of acting knowledge on this from everyone with whom you got to work.

That was one of the great things about it being my first job. I was thirteen when I started and the parallels between my and Sansa’s story were amazing. She was thrown into a world of aristocracy and royalty that she had no idea about and has only really dreamed of. The same is true of me. And then she learns how to play the game through actually experiencing it and not through people teaching her what life is really like in that world. The same’s true of me in this business — I had to learn my tricks through working in it as well.

You’re from a very small town, so this must have felt like getting thrown into the deep end.

I’d done a bit of training through youth theater for about ten years, but it was only a one-hour class on a Saturday. And it was theater training, so I really had no real idea of what life on set was like. I can’t really completely remember how I felt about it or what it was like on the pilot, because I was so young. I wish I could go back and see myself not knowing what the hell a mark was or what the hell a director of photography [was].

Do you ever go back and watch old episodes?

No. No way! I’m so embarrassed by the work I produced in those first few episodes. I think everyone’s their own biggest critic. Seeing that is pretty uncomfortable for me. Even now, I prefer not to look at the dailies or go into video village and see what kind of work I’m doing at the time, because I just find it so uncomfortable. I don’t like watching myself.

Beyond being uncomfortable watching yourself acting on camera, I can’t imagine going through one’s teenage years and early 20s in the public eye.

I have no choice — and it’s something I had always wanted to do. At 13, you don’t really prepare yourself for the public eye. I had just wanted to act. And I didn’t know the show was going to take off the way it did. Being in the public eye is a little tricky, especially from my formative years, going through puberty and everything was very difficult, especially given how the media portrays what young girls should look like. But luckily, I have Maisie [Williams] by my side. That was the greatest thing, to have someone going through the same thing at the same time. If she went through a hard time, I would be there for her, and if I was going through a hard time, she would be there for me. I was very lucky to have her by my side. I’ve never had a friendship like it, and I’ve really never had a relationship like it in my life. Because we’ve been through a lot together, and a lot that my friends back home — they haven’t been through those experiences, and they can’t really grasp some things that I or she go through. So, to have someone that knows exactly what I’m going through and came from the same kind of background, it made us so incredibly close that a lot of people think we’re dating. A lot of people think we’re in love! We’re kind of joined at the hip and we do literally everything together. She goes to the toilet, I’ll go into the bathroom with her. It’s that kind of relationship.

You have that incredible scene in “Battle of the Bastards” where you leave Ramsay Bolton to die. Do you worry — as someone with a sense of love for Sansa — that her good is being overshadowed by her canniness and desire for revenge?

I’ve been battling with this quite a lot. I do wonder if it’d be kind of impossible for this world and all of these people who she’s surrounded herself with, of course that would rub off on her. And she’d be learning things from them and since the age of 13 she hasn’t been with her family and had those Stark morals reiterated to her on a daily basis. She’s had to do that herself and over this period of five years she’s been away from her family, she will have one way or another been swept up in this world of betrayal and revenge. I do wonder if she’ll falter a little. She’s spent so long trying to survive and see her family again — it’s the only thing that’s kept her going and motivated, when so many times, she could have given up. So I think she may change a little, but at the end of the day, I think her heart is still good. The way she deals with her problems and her enemies may be different from how she would have dealt with them in the day when she was 13 or so.

With all that said, it must have been kind of a perversely fun day on set with Ramsay, and to get to do it in such a dramatic way.

Oh yeah, it was amazing! For me as Sophie, it was the most awesome scene, because I’ve been waiting for so long to have my first kill. To constantly see people like Maisie killing people onscreen, and it’s so badass and she looks so cool, and I’m just kind of like dancing around, crying. It felt really good to give Sansa back that power that’s been stripped from her. She’s been manipulating people, but very under-the-radar. She’s still suffering through it. So this was the moment where she had all of the power. I’m sure it was intoxicating for her, too, that feeling she’d been craving for so long, and it was intoxicating for me. I loved it! I want more kills!

Along the way to this triumph, there were some traumatic and disempowering moments for your character, particularly in the Ramsay storyline. They were criticized by people as offensive and degrading. Were you surprised by this reaction?

I wasn’t overly surprised. Of course, it’s a sensitive subject. And there is still such a taboo surrounding subjects like that and you don’t really see it portrayed onscreen that much. But one of the things it stirred in me was surprise that so much of people’s time and energy was being spent discussing a fictional scene on television when you hear about people in third world countries —and not just third world countries, all over the world! — getting raped every day, and sexually assaulted every day. This was the trending topic on Twitter, and it makes you wonder, when it happens in real life, why isn’t it a trending topic every time? This was a fictional character, and I got to walk away from it unscathed. Also, why should it be taboo to portray onscreen? If it gets that discussion going then I think it’s really important. It has to be brought into the mainstream because it is. Whether people want to hide it in the closet or not, it happens all the time, everywhere. It is mainstream. So it would almost be an injustice for us to ignore. Things like that did and continue to happen. And I feel so passionately about it that when something like that happens onscreen and there is a discussion and there is an uproar, great! Let’s take that discussion and that dialogue and use it to help people who are going through that in their everyday lives. Stop making it such a taboo, and make it a discussion.

Do you have hopes as to where Sansa might end up?

I still haven’t seen a script — and you never know, I might not have made it through seven! This is Game of Thrones. I think it’s a fairy tale version and it’s probably not going to end up happening, because it is Game of Thrones, but my hope is that she finds her family again and the Starks are strong again — the remaining Starks! We have Jon and Sansa at Winterfell, so this is a good start, and I hope that they find each other again and become one of the most powerful families in the Seven Kingdoms again! Ideally, I’d like her to get her revenge on Cersei and many of the others who have done her wrong. What I loved about the character and what I didn’t expect was how much she’s been growing. Even if she didn’t get that final end result of being united with her family again, my hope for her is that she continues to keep growing more and more powerful and confident in herself. But in reality, it’s probably not going to happen, and she’s probably going to die! [laughs] 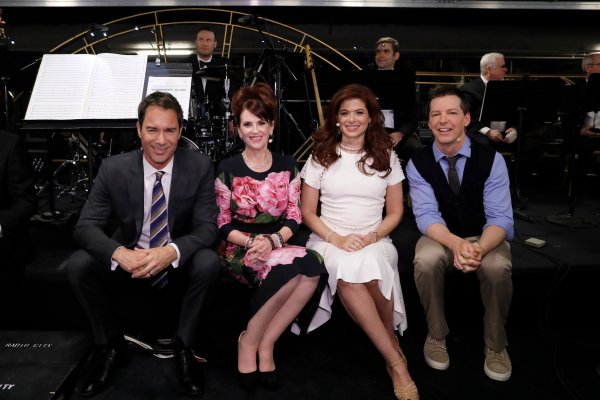 Will & Grace Celebrate the Fourth of July With a New Promo
Next Up: Editor's Pick