How President Trump's Decision to Fire James Comey Could Backfire

President Donald Trump’s decision to fire FBI Director James Comey rocked Washington on Tuesday, raising questions about the future of the investigation into his campaign’s ties to Russia and potentially setting off a chain of events that could envelop his administration.

Comey, whose investigation into Hillary Clinton’s private email server helped lift Trump into the White House, was leading the federal counterintelligence investigation into whether advisers to the President had sought to collude with Russian officials in their efforts to swing the 2016 election. The ouster of the nation’s top cop prompted comparisons to Watergate, as Democrats pilloried Trump for sidelining the official overseeing a probe that could threaten his presidency.

But the shock move is fraught with political peril as well. Calling the firing a cover-up, a slew of Democrats called for the appointment of a special prosecutor, who would have broad authority to investigate the Trump campaign and administration. At minimum, such a probe would indefinitely extend questions about Trump’s ties to Russia, and it could result in criminal charges.

“This is Nixonian,” said Senator Bob Casey of Pennsylvania, one of several Democrats who likened the move to the so-called Saturday Night Massacre, in which President Richard Nixon fired the special prosecutor appointed to the Watergate investigation, prompting top Justice Department officials to resign in protest. Said Senator Richard Blumenthal on CNN: “We face a looming constitutional crisis.”

Trump’s decision ostensibly came at the recommendation of Attorney General Jeff Sessions and deputy attorney general Rod Rosenstein, who laid out the case for sacking Comey in a memo that detailed his mishandling of the investigation into Hillary Clinton’s private email server. But those complaints about Comey’s conduct, echoed by Republicans and Democrats alike, concern events that took place before the 2016 election. And they did not dissuade Trump from retaining Comey, whom he has praised on multiple occasions, when he took office in January.

Trump’s own statement Tuesday appeared to support his opponents’ suggestions that the decision was driven by the Russia investigation. “You are hereby terminated and removed from office, effective immediately,” Trump wrote to Comey in a letter released by the White House. “While I greatly appreciate you informing me, on three separate occasions, that I am not under investigation, I nevertheless concur with the judgment of the Department of Justice that you are not able to effectively lead the bureau.”

Further clouding matters, Trump’s former longtime security guard and current Director of Oval Office Operations Keith Schiller hand-delivered that termination letter to the Bureau Tuesday, according to an administration official. At the time, Comey was in Los Angeles, where he was visiting the local FBI field office and speak at a recruitment event late Tuesday. White House Press Secretary Sean Spicer said the letter was also emailed to the FBI. Officials said Comey learned the news from television. Senior members of Congress were only informed of the news minutes before the White House announced it, Spicer confirmed.

Sessions had previously recused himself from the election probe over his failure to disclose to Congress meetings with Russian officials in 2016. As a result, the Russia investigation will now be led by Rosenstein, a widely respected career prosecutor who served under Presidents George W. Bush and Barack Obama. In a memo accompanying Trump’s letter, Rosenstein laid out the case for Comey’s firing.

“I cannot defend the Director’s handling of the conclusion of the investigation of Secretary Clinton’s emails, and I do not understand his refusal to accept the nearly universal judgment that he was mistaken,” Rosenstein said. “Almost everybody agrees that the Director made serious mistakes; it is one of the few issues that unites people of diverse perspectives.” The FBI, Rosenstein added, “is unlikely to regain public and congressional trust until it has a Director who understands the gravity of the mistakes and pledges never to repeat them.”

Rosenstein’s indictment stemmed primarily from Comey’s decision to circumvent then-Attorney General Loretta Lynch and the Department of Justice to announce his recommendation that no charges be brought against Clinton, as well as to criticize her handling of classified information. “It is not the function of the Director to make such an announcement,” Rosenstein wrote. He criticized Comey’s October 28 letter, which announced the reopening of the Clinton investigation. According to Spicer, Rosenstein’s memo was presented to Trump today.

“No one from the White House” directed Rosenstein to lay out the case for Comey’s firing, Spicer told reporters late Tuesday. He directed questions about Sessions’ role to the Department of Justice, which did not immediately respond to a request for comment. Spicer also did not address why Trump decided to can Comey now, when the underlying facts have remained unchanged for months. “It is his recommendation in concurrence with the Attorney General that the president based his decision on,” Spicer said.

The White House is opposed to Democratic calls to appoint a special prosecutors. “There is clearly at this point no evidence of a reason to do that,” Spicer said. “Right now, on multiple occasions, they said the president isn’t under investigation.”

Rosenstein, who was confirmed by the Senate only two weeks ago in a 94-6 vote, now has a pivotal decision before him. With the Russia probes in both the House and the Senate sputtering, the deputy attorney general faces pressure to appoint an independent special prosecutor. During his Senate confirmation hearings, Rosenstein signaled that he was willing to do so if he deemed it appropriate.

An independent counsel with free rein to poke around the nooks and crannies of a presidency can have devastating consequences. It was the appointment of a special prosecutor to look into the Whitewater land deal that ultimately led to Bill Clinton’s impeachment for an unrelated extramarital affair.

Even senior Republicans expressed dismay at the firing, though they stopped short of calling for a special counsel. “I am troubled by the timing and reasoning of Director Comey’s termination,” said Senate Intelligence Committee Chairman Richard Burr, whose committee is probing Russia’s actions in 2016. “I have found Director Comey to be a public servant of the highest order, and his dismissal further confuses an already difficult investigation by the Committee.”

Senator John McCain added that he was “disappointed by Trump’s decision. “I have long called for a special congressional committee to investigate Russia’s interference in the 2016 election,” McCain said. “The president’s decision to remove the FBI Director only confirms the need and the urgency of such a committee.”

The White House appeared to be caught flat footed by the outcry. “Comey had lost the confidence across the board,” said White House spokeswoman Sarah Sanders. “When you have that happen, you can’t serve in that capacity.”

The irony of Comey’s firing is that the figure who helped propel Trump to victory — infuriating Democrats in the process — could now set in motion a chain of events that Democrats hope could lead to the unraveling of his presidency. Administration officials distributed Democrats’ prior cries for Comey’s dismissal as evidence the fallout was a mere political frenzy. Trump’s decision “should be welcomed by Democrats,” Spicer said.

As recently as May 3, Spicer assured reporters that Trump remained confident in Comey’s leadership. Now a President who believes the Russia probe is designed to undermine his legitimacy — on Monday he tweeted that it was a “total hoax”— has made the gamble to transfer control of the investigation to an official who has been on the job for just two weeks.

“We think he is beyond reproach and that his credentials are impeccable,” White House senior adviser Kellyanne Conway said of Rosenstein. “This is a decision he made to put the memo together that was presented to the attorney general, the attorney general presented it to the President, and the President took the decisive action that leaders do when they are faced with new facts and information.”

The White House may have hoped the move would put the Russia story to bed. “There is no there there,” said Sanders on Tuesday night. “It’s time to move on.”

Instead, they may have ensured that won’t happen. 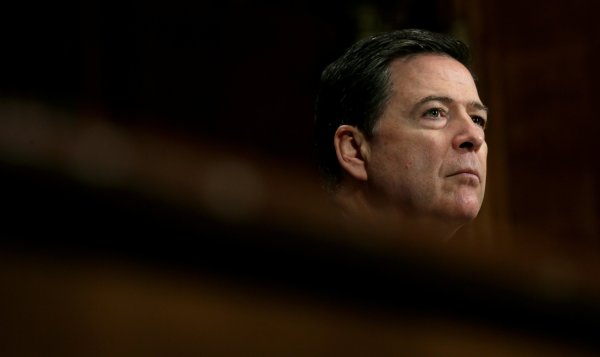 What Congress Had to Say About Comey
Next Up: Editor's Pick