How to Keep Marriage Interesting, According to Debra Winger

Mike Pont—Getty Images
Ideas
By Belinda Luscombe
Luscombe is an editor-at-large at TIME and the author of Marriageology: The Art and Science of Staying Together.

Debra Winger’s new movie, The Lovers, is about a long marriage that has seen better times. The actor, thrice an Oscar nominee, has been married to actor-director Arliss Howard since 1996, which is an eon in showbiz-years. In this interview with TIME, Winger shares what she thinks makes marriage work.

Your new movie is about a less than optimal long marriage. Are you generally a fan of long marriages? I only know of one deeply, my own. I don’t know if I’m a fan of others. I’ve got nothing against it as long as not a decision you make once and then never revisit it. I definitely think it’s a decision that needs to be revisited as if never decided before.

You’ve been married 20-plus years. Any tips for keeping it fresh? Anybody that would say anything about how they understand how to make love stay would have to be called a liar or misguided. We live in a universe that is based on impermanence. Anything that gets created gets destroyed. That’s the whole definition of life. Nothing escapes change. So why do we think we could create such a permanent institution as marriage? It just seems inorganic if looked at that way. The intention is to stay awake, stay alive, keep loving, keep lit up, keep being able to light up the other one. Those are the real tricks. That and some pixie dust.

There’s a scene in the movie in a grocery store where your character says to her husband something like ‘You’re looking the wrong way.’ Is that what we often do to those we are closest to? When you’re in a waking state, in a relationship, often it’s right when we fall in love. Everything is so alive and we can feel our body in a new way and we see things and it’s so exciting. And then you fall asleep and you think it’s the relationship but really this is an inside job. Our characters had something in the past we clearly lit each other up. We’re not able to see what’s behind us as anything but the past. But that’s also just the trick of life, not just marriage. It’s great that you have a scrapbook of your wedding and you celebrate anniversaries but it’s just empty if you’re not including it as part of a continuum.

Is there a cure for our desire for novelty? No. I think that’s the human spirit, who wants to see new vistas and find new food to eat; it’s probably been since the dawn of time. If you look at the same tree every day, you might want to see another leaf. But I don’t think that the outside appearances is what gives us the experience [of novelty]. I don’t think it’s about another person. We seek out someone else because we are not being seen. Everyone wants to see and be seen wants to love and be loved. And sometimes we go out looking but we’re really just looking for ourselves. ‘Can you see me? Am I here?’ And [when someone really sees us] we get lit up and we think ‘It must be that person.’ We spend our young life pursuing people that reflect us back to ourselves.

Do you understand the appeal of an affair? Yes, absolutely. The yearning for depth when you start to live a horizontal life: you wake up in the morning, have your coffee, go to work, come home, watch something. You’re accruing experiences or doing time. And then suddenly something happens that takes you down deep. That can catch you off guard if you’re not diligent because you’ll think it’s the thing, when really it’s just the yearning for depth. And I guess I must have believed it can recur with the same person, because I got married.

You have a pretty serious sex montage in this film. This isn’t a question. I just wanted to give you props. I didn’t have a real question about [doing] it because I wanted to bring all the parts of the relationship. You know if you’re going to bring the sad parts you’d be better be ready to do an honest day’s work and bring what the compelling thing is. I guess I do know this one thing about being with a person for a long time: different things draw you to each other. Sometimes you’re so happy you have your best friend to talk to. You’re telling stories and talking about your day and there’s just not anyone you would talk to in that way. And sometimes you’re just comfortable with someone, like it’s O.K. to be silent with them or that you’re liking the same things. But I cannot imagine a relationship that doesn’t have a piece of that pie or puzzle that is physical attraction. However it changes through the years or becomes more or less or waxes or wanes, it’s there. And it brought you together and it’s a real part of human relationships and anyone who thinks it dissipates with age is not trying hard enough, isn’t exploiting it fully enough because I have not found that. There’s just so many ways to Sunday. 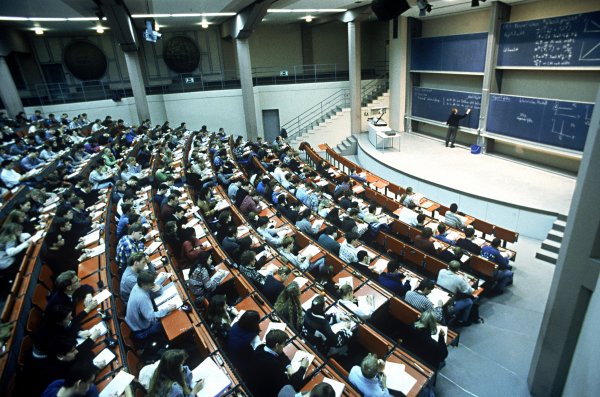 The Traditional Lecture Is Dead
Next Up: Editor's Pick