Tomorrow Is 50/50 Day, a Call for Gender Equality

A successful man said to a young woman I know, “Men have responsibilities; women have choices.” Yes, this happened in 2017. She was stunned. I wasn’t. That bias remains, despite the number of studies done across disciplines disproving the premise that men work as breadwinners, women for something less noble.

It’s time to change the story.

It’s way past time to make gender parity the norm, not mere aspiration. That’s why filmmaker Tiffany Shlain has organized 50/50 Day, a day-long international push on May 10 to change the conversation about gender equality. With her documentary “50/50” she asks: Why are there still so few women leaders? She even shows in one shot towering stack of notebooks denoting the more than 300 studies that show how everyone’s lives improve when men and women have equal opportunities. Over 10,000 screenings of the film are set to happen May 10 in offices, libraries, schools, local businesses and other gathering places. My organization Take The Lead is a proud partner.

Just as Galileo had a tough time convincing folks the world wasn’t flat and Earth wasn’t at the center of the universe, studies by a small army of scholars have yet to dislodge a worldview about the lesser value of women’s work. Culture runs deep, and it’s hard to change while you’re living in it. People in power don’t relinquish it willingly.

The diminution of women happens all the time — from a woman being offered “a mommy track” she never asked for, an unnamed leader refusing to shake a woman leader’s hand or outright sexual harassment. Let’s not fool ourselves — all of those moves are power plays meant to keep women off-balance, undermined and “in their place,” psychically and metaphorically.

Time to create another way. Let’s start by refuting once and for all old myths about why women do or do not work. There’s the study, “Rethink What You ‘Know’ About High-Achieving Women,” which looks at three generations of men and women graduating from Harvard Business School. Students of both genders start with the same ambitions and beliefs about the importance of career success. Do women drop out of their jobs en masse when it comes time to start families? Turns out only 11% do. Women leave their jobs after they give birth for other jobs that value their abilities over their circumstances of parenthood.

There are so many articles and books exploring why parity has been so elusive, from Anne-Marie Slaughter’s piece in The Atlantic, “Why Women Still Can’t Have it All” (my all-time least favorite title) to Jocelyn Frye’s just released “Defining Power and Why It Matters: Securing Women’s Equality and Women’s Futures.” They reveal compelling, maddening sides of this issue. Frye observes, “Unfortunately, one key problem that needs fixing is an old story encompassing obstacles that limit women’s autonomy and ability to control their futures. These obstacles are embedded in our laws, institutions and even our culture — obstacles visible and invisible but no less pernicious or impactful.” Case in point: In the latest giant step backward, last week’s vote by the House on health care threatens to put many family-oriented health care expenses back on the backs of women.

I am haunted by the scene in the new television adaptation of Margaret Atwood’s The Handmaid’s Tale when women are shut out of their bank accounts and fired. They leave, small boxes of family photos in tow, bewildered and scared. This is the cautionary tale of what it looks like when you have no agency, no voice and no place at the table where decisions are made. We — both men and women — can turn the page to a new narrative by challenging the stories we’ve been told about why women still face obstacles in the workplace. After all, we’re dazzled by our modernity. It’s time to match our forward-looking technology with a 21st-century view of leadership and gender.

I’ve been working for a long time on the front lines for women, and now I’m teaching women to lead. I’ve heard so many stories from women who have inspired me. Carey Lohrenz is one example. She was an aspiring fighter pilot when she was told that she only had two choices: She could leave the service or take a lower position. She had the presence of mind not to answer right away; she came back and demanded a third choice that would lead her to the training she wanted. As a result, she became the first female F-14 Tomcat Fighter Pilot in the U.S. Navy.

Women don’t need to mimic men. We must value ourselves properly and embrace our power to define our own terms and intentions and to assert our brands personally and professionally, so others do, too. When women become aligned with their own goals, when they see a problem and create a solution, their intentions transform them — and the organizations they lead.

The purpose of 50/50 Day is to awaken those who have forgotten their history. May it remind us that women are more than capable and have paid our dues multiple times over.

Gloria Feldt is the co-founder and president of Take The Lead and a bestselling author of four books. She is also the former president of Planned Parenthood Federation of America. 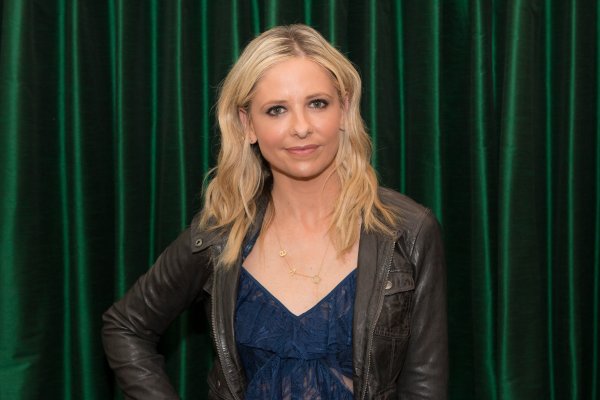 Sarah Michelle Gellar Reveals She Struggled With Postpartum Depression
Next Up: Editor's Pick