When photographer Souvid Datta admitted last week to having manipulated and infringed on a number of images over the span of his career, the scandal set off a series of reactions that has shaken the photojournalism industry. Not only have half a dozen organizations rescinded awards and grants they conferred to the photographer, but the renewed focus on his work has also called attention to a graver transgression that is prompting a call for a re-examination of some practices across the profession.

In April 2015, Datta — a Mumbai-born and London-raised photographer — was working on a project about the red-light district in Kolkata, India, when he took a picture of a 16-year-old girl being raped while working as a prostitute. Anyone under 18 is considered to be a minor in India, and the publication of a sexually explicit image of a minor is illegal there according to the Protection of Children From Sexual Offences Act of 2012.

Datta has said that the girl asked him to photograph her in that situation. “[Her] words were powerful, but troublesome,” he told TIME last week after criticism mounted over the use of the picture to promote a grant. “I mulled it over for a few days but then it began to dawn on me. How could I tell this story without at least once being willing to show what takes up most of her day?”

But, explains Peter N. Bouckaert, Human Rights Watch’s Emergencies Director, whether or not the girl asked to be photographed — something that cannot be independently confirmed — is irrelevant. “[It’s] an image that portrays extreme violence against a child. It’s not about consent at that stage,” he tells TIME. “It really crosses the line to photograph her being raped.”

Local activist Shreya Bhat, who played a crucial role in exposing this issue, was shocked when she read the girl’s age in a caption accompanying Datta’s photograph. Taking a picture of someone so young in that situation isn’t “documenting sex work,” she says, but photographing rape — a crucial difference. “Maybe the others saw it simply as a photograph that tells a story, [but] many of us saw it as someone documenting something illegal, in a rather insensitive fashion,” she says, “and not taking responsibility [for] any of it by calling the 16-year-old responsible and accountable, instead.”

Since his last interview with TIME, Datta has declined to comment further. “Following advice from my legal counsel, I am in the process of reviewing my archives,” he says.

Anyone reading the caption could see — as Bhat did — that the girl was only 16. And yet, in the two years since Datta took the picture, many established photo editors, photographers and organizations saw the image. And, often, they responded by encouraging Datta’s work, not by questioning his judgment. Some of these experts sat on juries that awarded Datta with cash prizes and grants; TIME estimates that Datta received more than $30,000 from such sources over the last three years.

The image was one of several identifying the 16-year-old girl to be included in Datta’s winning application for the 2015 Getty Images Grants for Editorial Photography, which comes with a $10,000 prize. Some of these images were also used to promote the prize’s announcement.

It was part of Datta’s portfolio for the 2016 Visura Photojournalism Grant Award, which comes with a $5,000 cash prize — the terms and conditions of which dictate that the photojournalist produced the work, without manipulations, and secured all necessary permissions. In his submission, Datta said that he had model releases for the protagonists he photographed and that he had made them “fully aware of my intentions with this investigation,” he told Visura. The organization’s founder, Adriana Teresa Letorney, tells TIME she was thus blindsided to learn of Datta’s actions. “We worked with the information we had, and the reality is there was no reason to question the validity of what was presented to us,” she says. “We all genuinely believed him to be honest and forthright.”

The photograph was used to promote a LensCulture award that ran in association with Magnum Photos; Datta also won a Magnum 30 Under 30 award and an IdeasTap Magnum Photos Photographic Award. LensCulture declined TIME’s requests for comment, but called attention to an apology released on May 4. “We at LensCulture made a terrible mistake in judgment last Friday by publishing an image depicting sexual violence against a young girl on our Facebook page,” the statement read. Magnum Photos was unable to comment at the time of writing.

The controversy has since forced many organizations to reassess their procedures.

Getty Images pulled down the work from its website and is now considering its next steps. The Pulitzer Center, which awarded a travel grant to Datta to support his work on sex trafficking in south Asia, has also withdrawn its support, cancelled an invitation for Datta to speak at an event and moved to reinforce its procedures in the future. The Center’s senior editor, Tom Hundley, says that in the future he will speak with grant applicants to make sure they fully understand the ethics statement to which they’re agreeing. Visura has suspended its $5,000 Photojournalism Grant as it works to figure out a way to prevent something similar from happening in the future. The Alexia Foundation, which gave Datta a $500 cash prize in 2013, has put into place new procedures for its awards scheme, requiring raw or unprocessed images from all its finalists. “It is too bad that a few people’s dishonest actions affect so many honorable people,” says Mike Davis, Alexia Chair at Syracuse University’s Newhouse School.

Maggie Steber, a photographer and a judge for the Visura grant, says she feels duped by Datta’s actions. “I think those of us who have been around for a long time put our hopes and dreams for the future of photography into these young people coming up. Souvid broke a trust,” she says. “Even if that was not his intention, he broke a trust and it cannot be repaired so easily.” Steber believes she and her co-jurors “might have asked some tougher questions of Souvid’s work because of the access and the similarities to the work of Mary Ellen Mark,” she adds. “I put my trust in his work and in him and I am ashamed to have done so because I see how wrong I was.”

Six other judges from various juries did not return TIME’s requests for comment. Two asked for more time before commenting.

But the problem of photo manipulation and plagiarism cannot necessarily be solved by changing contest conditions. Those processes can’t control “an individual’s decision to lack transparency,” says Visura’s Letorney — and, as the Pulitzer Center’s Hudley puts it, every profession has “its share of cheaters. Journalism—and photojournalism—is no exception.”

Bouckaert agrees that one of the sad lessons of what happened with Souvid Datta is that, though “most photographers I work with work very hard and adhere to very high ethics,” lapses can pass unnoticed amid success.

As a result, the industry needs to come up with safeguards against possible problems. That means, he says, that Datta should not shoulder all the blame alone. Rather, the industry needs to examine the “culture and environment that exists out there for photographers who try to establish a name for themselves.”

The Girl in the Picture

As for the photograph of the rape, the problem exposed by the photographic community’s response to Datta’s image may be even harder — and more important — to solve.

Nina Berman, a Noor photographer, believes the photograph should never have been shown in the first place. “I don’t think editors would have considered publishing a photograph of a 16-year-old being raped, or even an adult woman being raped, especially shot from the point of view of the rapist, if the girl or woman had been living in the U.S. or Europe,” she tells TIME. “And when a human-trafficking victim is forced to have sex, that is rape.”

The decision to publish and praise an image of such a crime is not unrelated to the current photojournalism economy, says photographer Donald Weber. He believes that this situation calls attention to the effects of consolidation of the media landscape and its effects on photographers, who know that the way to break into a tough industry is to trade independence for visibility. “The awards and the prizes are a quick way, a cheap way, an easy way to acquire this visibility. And photo editors, top photographers, curators are all on these juries. It becomes a self-referencing spiral,” he says.

“Spectacular” and “graphic” images can be perceived as a way to stand out in a crowded ecosystem, says Fred Ritchin, the Dean of the International Center of Photography. That means there’s a market for “the brown body, the black body, the female form, the sexual, even though it’s abuse,” he says.

“People publish bombs going off and destruction, but they don’t necessarily publish essays that look at why we have a war, who’s controlling it, what are the economics, what are the political issues,” says Ritchin. “I think we’re making an enormous error by supporting the more visual and spectacular as opposed to the more thoughtful. And we make that mistake over and over again.” 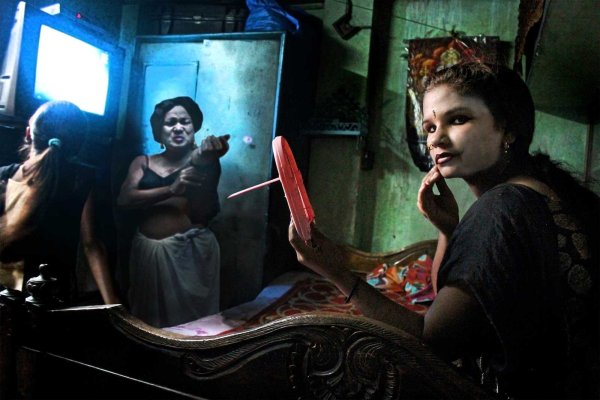 Souvid Datta: 'I Foolishly Doctored Images'
Next Up: Editor's Pick