Microsoft's Windows Chief On the Surface, Virtual Reality and More

Windows may dominate the worldwide desktop market, but Microsoft is working to adapt the operating system for all kinds of devices, from giant displays like the Surface Studio to mixed reality headsets like the HoloLens.

The Redmond, Wash. company is expected to unveil more details about the future of Windows this week at its annual Build conference. The event comes after Microsoft recently debuted new products including Windows 10 S and the Surface Laptop . Harman Kardon also just revealed its new Invoke smart speaker, which is powered by Microsoft’s Cortana virtual assistant.

Terry Myerson, Microsoft’s executive vice president of the Windows and devices group, sat down with TIME to discuss the future of Windows, Microsoft’s hardware efforts, virtual reality, and more. Below is a transcript of our conversation edited for length and clarity.

TIME: Over the past several months there’s been a bigger focus on how students and creative professionals can use Windows and Surface devices. Why?

Terry Myerson: It’s become more than just a focus. If you go back in time to three years ago when Satya [Nadella] first became CEO, there was this vision of ubiquitous computing. Everything around us was going to become smart and connected, whether it was coffee pots, the lights, your phone, everything. And there was this question of: What was Windows’ role? Where are we going to go?

I think prior to us thinking about our purpose this way, we might have had an event where we talked about a new version of Windows that had certain features and a new laptop that had certain specs. But you step back and you say, “why would the world want these things? What is the impact we could have, and where could we have the biggest impact?” It’s not just the event, you have to start early and start with that purpose and what you’re doing. It’s very authentic. This authentic concept about, why Windows, why Surface, where we want to go in this world where everything is going to be smart.

When the first Surface was announced in 2012, it started as a tablet that could replace your laptop, and now here we are with a Surface laptop. Can you talk about the strategy that went into that decision?

At the core of the Windows ecosystem today, laptops are the category where we have the most impact on the world. We participate in so many categories, from mixed reality to large screens to phones to laptops . . . and laptops are the biggest category. In laptops we saw an opportunity to really try and set a new bar.

At the core of it is Windows 10 S, the ability to design a device specifically for this new platform. That’s what allows us to have the 14.5 hours of battery life. That’s what allows us to have the better performance. Our partners are going to look at the customer reception to it and decide should they, should they not, it’s their business. But our goals are to grow the Windows ecosystem.

This isn’t the first time Microsoft has launched more than one version of Windows. Windows RT, the “lighter” version of Windows 8 that debuted in 2012, wasn’t heavily embraced by partners, caused confusion among customers, and was eventually phased out. Why will Windows 10 S be different, and what have you learned?

There are things that are distinctly different. RT ran on ARM underpowered processors. This is going to run on every class of hardware. There are some low-spec devices it will run on, but it will also run on the Surface Laptop, which is a beautiful premium device.

If you buy a Windows 10 S device, you can switch to Windows Pro. That’s a big difference versus, you just buy it and you get what you get. So now you have a performance system, you have a way to say “Okay, I don’t want these constraints, I want to go out into the open world.” There are a lot more apps in the Windows Store now than there was. This version of Windows is more popular than Windows 8

Those are all learnings we might not have had if we couldn’t reflect on the past. But that’s what we do, we’re always trying to learn. When you go back in time and look at what they were trying to achieve, it was in some ways similar. If I had to pick a fourth thing, it’s really focusing on, at least initially, these students in the classroom. RT was launched as more of a consumer product.

You talked before about how many new types of devices will become “smart” and capable of connecting to one another. How do you see Cortana playing a bigger role as this transition occurs?

Everything around us will be smart and connected. And you’re just going to expect a certain level of intelligence when you’re dealing with all of your things, that they’re all going to work together in all the right ways. I think with each of these assistants, there’s opportunity to be the glue that provides the orchestration across all of the devices in our lives. All these scenarios where there are all these apps and devices in our lives. We don’t really want to interact with any one of them, we want to interact to achieve a goal, a purpose. And I do think having one of these personal assistants understand how to interact with apps and devices, that’s the vision we want to achieve.

How will voice be a bigger part of the way we interact with apps on Windows and Surface in the future?

Amazon struck a chord with voice with Echo. It’s great work. We’ve supported voice in our devices for a long time. But how often do you talk to your laptop? These phones have had voice support, and sometimes people use it, but not like they do with Echo. And so I do think we’re developing all of these input technologies at a core platform capability. But getting the device form factor right, where there’s something innately human about interacting with it, is critical.

Of all the devices we have, where people are using voice the most is Xbox. People are home, they put their headsets on, and they’re talking to each other. The ‘Hey Cortana’ scenario shows up on Xbox a lot. But the Surface scenario, voice is there and we’re developing it, but I don’t think we’ve nailed the right scenario yet.

One of the most interesting announcements from last year’s Surface Studio event was the Surface Dial. As we move into augmented and virtual reality, how is Microsoft thinking about new forms of interaction?

When we started out with this mixed reality journey, we had gaze, gesture, and voice. We started out with this vision that the world would be your display. We always knew there was going to be this spectrum of virtual reality where your displays are opaque, and augmented reality where the display is translucent. And this spectrum, we called it mixed reality.

But our first big bet was with Hololens, which was augmented reality. And gaze, gesture, and voice were the three things we bet on: where you are looking, what you are pointing at, and what you are saying.

Having a display that is translucent sometimes, opaque sometimes, and you can wear it all the time, you know [Facebook CEO Mark] Zuckerberg has talked about that, we’ve talked about that. I think that’s a frontier that we all can see in the future. I picture us having this giant Jenga set in front of us. Now we actually have the technology to reach out and push that Jenga bar and have all the right physics so that it falls down correctly. But you don’t feel it. You don’t feel the friction. That’s the scenario I think about all the time.

Will mixed reality ever be mainstream? For those who aren’t using it for gaming or commercial use cases, will it ever be the new home computer?

I remember looking out from my office a couple of weeks ago and someone was spray-painting the street to say “there’s a pipe down here.” And I remember thinking that’s so lame; they should be able to see a virtual map of where the pipe is. If we can get that presence right, I think it’s just going to revolutionize our lives, allow us to connect when we’re apart. 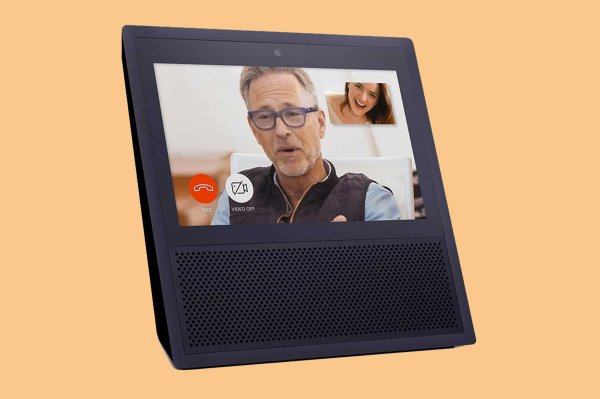 Amazon Just Launched the First Echo With a Screen
Next Up: Editor's Pick