50 Years Ago This Week: The King of Late-Night Television

When it came time to introduce the subject of this week’s cover story, TIME took the easy route: “And now — here’s Johnny!”

Johnny Carson had taken the reins at NBC’s Tonight in 1962, taking over from Jack Paar, and had already become a late-night television institution. And, thanks to a new contract, he was making $1 million a year doing it. (That’s about $7.4 million today — about half of what current host Jimmy Fallon makes, but a lot for the time.) What, TIME wondered, was the secret to his success?

Maybe it was a new cultural climate in which, as actor Tony Randall put it in the story, “people must be entertained 24 hours a day,” and talk shows were on the rise in both television and radio. But, more likely, it was something special about Carson:

Cashless society: A funny letter from a reader about an article that had suggested that the U.S. might be moving toward a system where few people carried cash is fascinating for the way the reader’s concerns differ from those today. Faced with the prospect of bank cards similar to today’s debit cards, the reader frets that it will mean the end of the “fun” out of controlling (or manipulating) one’s own bank balance. “If we are to live in a computerized society where everything is tabulated and deducted as soon as purchased,” she wrote, “I will have to live within my income, and I definitely do not want that.”

War report: Though the Vietnam War had been going on for years, with the U.S. actively involved since 1961, this week’s issue contained the first detailed Defense Department accounting of the American dead. The total combat dead by that point included “6,878 enlisted men, 868 officers and 80 warrant officers.”

News news: A media report explains a change underway in the “women’s pages” of the nation’s newspapers. Once separated from the news as the home of gossip and society profiles written by socialites in their spare time, the sections of papers that were aimed at women were now full of incisive reports on the issues that really affected readers’ lives, from stories about birth-control developments to an exposé about the hidden lives of suburban alcoholics. “The women editors have performed so handsomely that they may be working themselves out of a job,” TIME noted. “Not only is their section as newsworthy as the rest of the paper; in some cases it has been absorbed by it.”

On the record: Another bit of media news strikes at an ongoing problem for the press: what to do about anonymous sources. The New York Times and Washington Post had worked together to come up with a new, stricter policy about the use of not-for-attribution government sources. Though Post Managing Editor Benjamin Bradlee acknowledged that his paper would probably get scooped by less scrupulous sources now and then, he considered it a service to readers “to try to call a halt to spurious backgrounders,” as TIME put it.

Cutting-edge technology: The newest thing making a splash on American college campuses was the computer. But the advances that were making such a difference in 1967 would likely not be recognized by today’s undergrads. (“At Texas A. & M.,” the magazine observed, “students drop their computer data at a window, walk half a block to find the answers waiting on a table—and find the process so pleasant that they dub these evening sessions ‘happy hours.'”) One concern they would likely recognize was identified by Harvard’s Anthony Oettinger, who told TIME that the students of 1967 weren’t afraid of the new technology—”The problem,” he said, “is to keep them from getting addicted.”

Great vintage ad: The little ad in the top right corner of this page is trying to sell the services of a career counselor — but aims its copy at women in a very retrograde way, asking them to think about whether they’re holding up their husbands’ promotions by giving them the idea that security is more important than advancement.

Coming up next week: The story of African-American soldiers in Vietnam 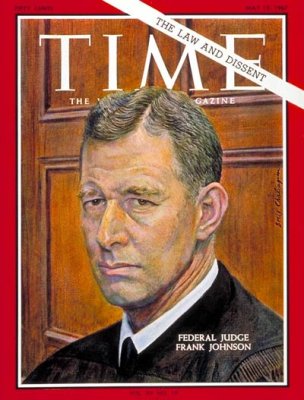 50 Years Ago This Week: Meet the Little-Known Judge Defending Civil Rights
Next Up: Editor's Pick