Tom Holland and Zendaya swung by the MTV Movie & TV Awards on Sunday to introduce a new clip from Spider-Man: Homecoming.

After Holland showed off some of his real-life gymnastic skills onstage, he and Zendaya presented the clip, which finds the wisecracking arachnid whiz kid sneaking back into his Queens bedroom in his full Spidey suit. It’s there that he comes face to face with his classmate Ned Leeds (Jacob Batalon), who until now, had no idea that his best friend was actually their friendly neighborhood Spider-Man.

Peter begs Ned to keep his webslinging a secret — especially around Aunt May (Marisa Tomei). “You know what she’s like!” Peter insists. “If she finds out people are trying to kill me every single night, she’s not gonna let me do this anymore.”

“I’ll level with you,” Ned replies. “I don’t think I can keep this a secret. This is the greatest thing that’s ever happened to me.”

Homecoming picks up after the events of Captain America: Civil War. Peter Parker has returned to Queens, where he finds himself struggling to balance his secret identity with his newfound heroism (with a little guidance from his mentor, Robert Downey Jr.’s Tony Stark). Zendaya plays one of his classmates, Michelle, with Michael Keaton as the nefarious Vulture who threatens New York. 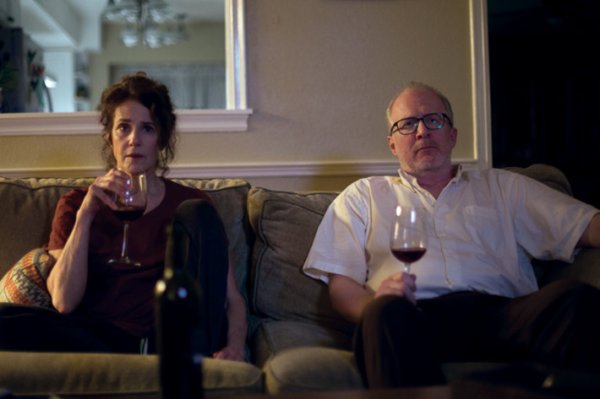 Review: The Lovers Proves that Love After 50 Isn't Science-Fiction
Next Up: Editor's Pick