A 6-year-old girl has died and six more children were injured after a bouncy castle in Spain floated more than 32 feet in the air and may have exploded, local media reported.

The incident took place on Sunday afternoon while the children, between the ages of 3 and 11, were playing in the inflatable bounce house at a restaurant in the Girona town of Caldes de Malavella, on the northeastern coast of Spain. According to El Pais, all seven children were hurled out of the castle at a distance of 32 to 65 feet above the ground. One girl died from her wounds, while two of the other children were being treated for serious injuries. The rest of the children suffered minor cuts and bruises.

Officials are still investigating why the inflatable came unmoored; there may have been a problem with the castle’s anchoring or a safety valve failure, according to reports. The mayor of the town, Salvador Balliu, told El Pais that eyewitnesses said the castle floated up, while others reported having heard “a huge explosion,” which ejected the children. Debris from the bouncy castle was found around 120 feet away on the roof of the restaurant and on the tops of trees. 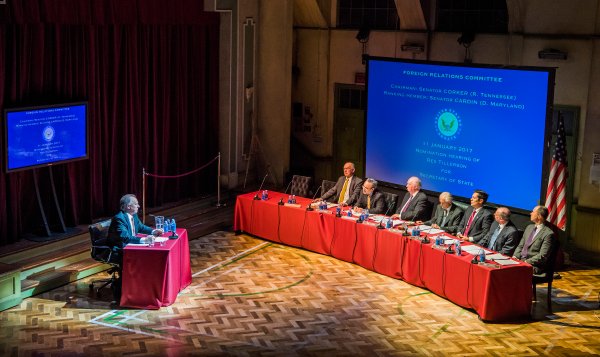 All the President's Men? The Trump Team's Senate Hearings Come to Broadway
Next Up: Editor's Pick