Supporters of Emmanuel Macron celebrate in front of the Pyramid at the Louvre Museum in Paris on May 7, 2017, after the second round of the French presidential election.
PHILIPPE LOPEZ—AFP/Getty Images
By Alana Abramson

Congratulatory statements from world leaders across the globe began trickling in after it was announced that centrist Emmanuel Macron won the French presidential runoff, even from those who aligned more ideologically with his opponent, the far-right National Front’s Marine Le Pen.

After Macron was announced the projected winner, President Donald Trump weighed in on Twitter.

“Congratulations to Emmanuel Macron on his big win today as the next President of France. I look very much forward to working with him!” Trump tweeted.

“We congratulate President-elect Macron and the people of France on their successful presidential election. We look forward to working with the new President and continuing our close cooperation with the French government,” the statement said.

While Trump never officially endorsed anyone in the French election, he told the Associated Press last month he thought the attack on the Champs-Élysées that left one police officer dead and two others injured would help Marine Le Pen’s prospects because “she is the strongest on borders and she is the strongest on what’s been going on in France.”

READ MORE: Emmanuel Macron Has Big Plans for France. Is It Ready for Them?

Le Pen’s ideology and rhetoric also shared a lot of similarities with what Trump espoused on the campaign trail in 2016: putting the people of their own countries first and cracking down on immigration, which they claimed was taking away jobs.

“We are both fighting the treaties aggravating free trade and wild globalization, in the mutual interest of our respective nations,” Le Pen, who said Clinton’s election would have had “disastrous” consequences for France, told TIME last December.

Theresa May, Britain’s Prime Minister, who is currently in the midst of negotiating Britain’s exit from the European Union, also offered congratulations to Macron.

“I warmly congratulate Emmanuel Macron on his success and I look forward to working with him on a wide range of shared priorities,” she said.

Leaders of the European Union, from which Le Pen said she wanted to remove France, were explicitly effuse in their congratulations.

“Happy that the French chose a European future. Together for a #Europe more strong and more just,” Europe,” tweeted Jean-Claude Juncker.

The European Council President went even further: “Congratulations to EmmanuelMacron, the french who chose freedom, equality and fraternity and said no to the tyranny of the ‘fake news,'” he posted on Twitter.

The sentiment was similar among countries in the European Union.

German Chancellor Angela Merkel, who faces her reelection campaign in the fall, called Macron to congratulate him. Mark Rutte, the new Prime Minister of the Netherlands who defeated his own right wing opponent in March, praised the outcome on Facebook, writing that Macron was “a clear progressive and pro-European choice.”

And former candidates who hadn’t managed to fend off their populist opponents seemed to be finding some redemption.

“Victory for Macron, for France, the EU, & the world,” Hillary Clinton wrote on Twitter. “Defeat to those interfering w/democracy. (But the media says I can’t talk about that).” 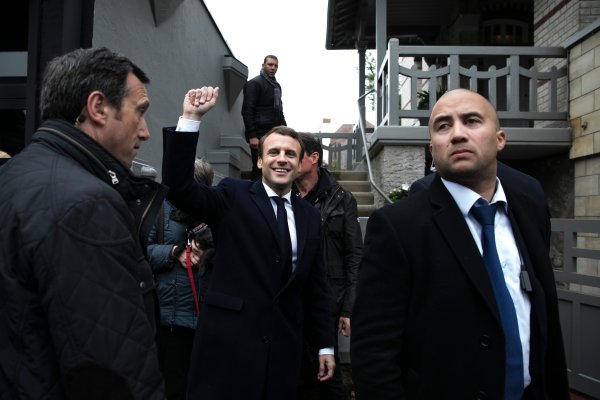 Macron Triumphs in France
Next Up: Editor's Pick