George R.R. Martin still hasn’t officially said when The Winds of Winter, the sixth book in his A Song of Ice and Fire series that serves as the basis for HBO’s Game of Thrones series, will come out. (And don’t hold your breath for any news about the planned seventh and final book in the series, A Dream of Spring.) But for fans who are eager to peek inside the mind of the series’ creator — or just find entertainment in the same things that entertained him — here are five books by authors that Martin says have influenced him in one way or another.

The Lord of the Rings

Martin has called J.R.R. Tolkien his “great model” in shaping the overarching plot of his series. “If you look at Lord of the Rings, it begins with a tight focus and all the characters are together. Then by end of the first book the Fellowship splits up and they have different adventures. I did the same thing. Everybody is at Winterfell in the beginning except for Dany, then they split up into groups, and ultimately those split up too. The intent was to fan out, then curve and come back together.”

Tad Williams’ fantasy series Memory, Sorrow, and Thorn served as a catalyst for Martin to write his own. “I read The Dragonbone Chair [the first book in the series] and said, “My god, they can do something with this form,” and it’s Tad doing it. It’s one of my favorite fantasy series.”

As a young comic book fan, Martin has said he appreciated that Stan Lee’s Marvel characters changed over the course of time (unlike the DC characters, whose story arcs were more circular). He explained that he especially liked Avengers #9 because “Wonder Man dies in that story. He’s a brand new character, he’s introduced, and he dies. It was very heart wrenching.” If this sounds like the first season of Game of Thrones, maybe the future of Wonder Man holds a clue for the conclusion of Game of Thrones: “Of course, being comic books, Wonder Man didn’t stay dead for long. He came back a year or two later and had a long run for many many decades.”

French author Maurice Druon’s The Accursed Kings historical fiction series chronicles the period leading up to the Hundred Years War. “The Accursed Kings has it all,” Martin has written. “Iron kings and strangled queens, battles and betrayals, lies and lust, deception, family rivalries, the curse of the Templars, babies switched at birth, she-wolves, sin, and swords, the doom of a great dynasty … and all of it (well, most of it) straight from the pages of history. And believe me, the Starks and the Lannisters have nothing on the Capets and Plantagenets.”

The Other Boleyn Girl 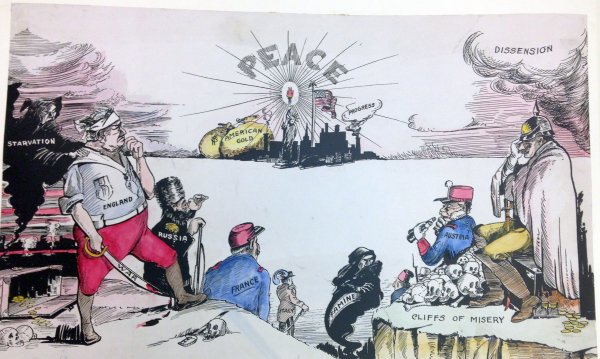 The Library of Congress Is Using These Images to Tell the Story of World War I
Next Up: Editor's Pick