How to Find the Best Period-Tracking App for You

If you’ve been disappointed by an app designed to track your menstrual cycle, you’re certainly not the only one. Many users have complaints about the accuracy, design, and features of currently available period trackers, according to a new study. The authors say that while no app is perfect, consumers should take time to compare different options and find the one that’s best for them.

Daniel Epstein, a doctoral student at the University of Washington’s Paul G. Allen School of Computer Science & Engineering, studies different ways in which people track their health and behaviors. When he began looking into how women keep tabs on their cycles, he was surprised that no large studies had been done—especially considering that one of the first questions doctors ask women is about when they had their last period.

So he and his co-authors collected data from 2,000 reviews of popular period-tracking apps for Apple and Android smartphones, including Clue, Eve, Glow, Life, P. Tracker, Period Diary, My Days, Period Calendar, and Pink Pad. They also surveyed 687 people and conducted in-depth interviews with 12 respondents, to understand how and why they tracked their cycles.

The team’s findings will be presented this month at the 2017 CHI Conference on Human Factors in Computing Systems.

Rather than rate the apps from best to worst or focus on overall opinions, the researchers asked users about specific characteristics they liked and didn’t like. Study participants included mostly heterosexual females, but also included gay and bisexual women, and some participants who identified as male or nonbinary.

Most of the participants said they used the apps to understand their bodies, to prepare for their periods, to get pregnant or avoid pregnancy, or to inform conversations with health care providers. These goals affected how they felt about different apps, the authors wrote; some users wished they could get rid of ovulation alerts, for example, if they weren’t trying to conceive.

RELATED: 10 Things That Mess With Your Period

Accuracy and flexibility were big concerns, as well, especially for women whose periods weren’t regular. Most apps have no way to adjust incorrect predictions or account for exceptional circumstances, like an illness, pregnancy, or change in birth control. “If a prediction is even a little bit inaccurate one month, it could snowball and affect predictions in later months, too,” says Epstein.

Many users were also turned off by the pink and flowery designs of most apps, or wanted something more discreet on their phone’s home screen. Some also complained about language or images that identified the user as a woman and her partner as a man, excluding transgender men and people in same-sex relationships. (On a positive note, the Clue app was highly praised as a gender-neutral option.)

To get our best wellness advice delivered to you inbox, sign up for the Healthy Living newsletter.

Overall, the study participants felt that their smartphone apps worked better than tracking their periods on paper, but that they still left much to be desired. “These apps make assumptions about how people identify themselves or their goals for tracking,” says Epstein. “Some are better than others, but we got the sense that no tracker was perfect and customizable enough for everyone.”

Epstein encourages anyone who wants to track their period to try two or three different apps at the same time, to see which one works best for them. “Everyone has different goals and different needs, and different features are going to appeal to them,” he says.

The paper provides recommendations for app developers to improve offerings in the future. But Epstein says consumers need to make their voices heard as well. “If you’re unhappy about your app, make sure the company knows about it,” he says. “If enough reviews are written and enough attention is placed on these issues, the designs will start to change.” 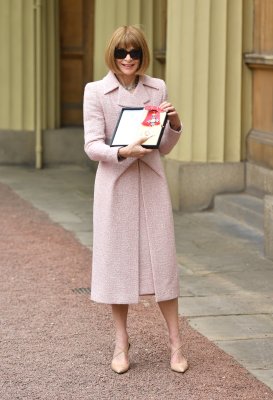 Anna Wintour Becomes a Dame
Next Up: Editor's Pick