Democrats Lost the Health Care Vote. But They Think It Could Win Them the House

President Donald Trump gathers with Congressional Republicans in the Rose Garden of the White House after the House of Representatives approved the American Healthcare Act, to repeal major parts of Obamacare and replace it with the Republican healthcare plan, in Washington, May 4, 2017.
Carlos Barria—Reuters
By Charlotte Alter

As House Republicans gathered in the Rose Garden to celebrate their narrow passage of the American Health Care Act on Thursday afternoon, liberal operatives and grassroots organizers were already busy planning how to punish them for it in 2018.

Democrats believe that the GOP’s vote to gut Obamacare will become a powerful issue in the midterm elections. The prospect of forcing House Republicans to defend an unpopular bill that could raise insurance costs and throw millions off their health plans has turbocharged an already energized party, boosting everything from fundraising and recruitment efforts to voter registration drives.

“You will have every provision of this bill tattooed on your forehead,” House Minority Leader Nancy Pelosi warned her Republican colleagues. “You will glow in the dark.”

Swing Left, a new grassroots organization devoted to taking back the House, raised $150,000 in the first hour after the vote, and at least $800,000 since Wednesday afternoon. Add in the cash raised by liberal networks like Daily Kos and ActBlue, and progressive groups eyeing the 2018 midterms hauled in at least $2 million in a matter of hours to help Democrats take on Republican incumbents.

The fundraising haul will come in handy, because the number of seats up for grabs may be bigger than either side expected even a few weeks ago. In the wake of the vote, the nonpartisan Cook Political Report shifted its ratings in 20 districts, downgrading six districts rated “solidly Republican” to “likely” GOP seats. That group included the district represented by Rep. Tom MacArthur (R-NJ), who co-wrote the compromise amendment that helped pass the bill. Eleven districts once rated “likely Republican” were downgraded to “lean” GOP, while three districts shifted from “lean Republican” to the “toss-up” column.

Flipping enough red districts to retake the House remains an uphill battle for Democrats, especially since gerrymandering efforts engineered by the right have reduced the number of competitive seats. But the new ratings reflect the growing possibility that the health care vote could help Democrats put the House in play, just as it did for Republicans after Democrats passed controversial health care legislation in 2010. “Not only did dozens of Republicans in marginal districts just hitch their names to an unpopular piece of legislation, Democrats just received another valuable candidate recruitment tool,” wrote the Cook Political Report’s David Wasserman.

The Swing Left funds are earmarked to aid Democratic candidates in 35 swing districts represented by GOP representatives who voted for the AHCA. In many cases, the money is being raised for candidates who haven’t even announced yet. Swing Left says it will stay out of primaries, but as soon as those Democratic nominees emerge, they’ll get cash to attack Republican incumbents.

“In previous election cycles we might have had the luxury of saying ‘hm, let’s wait and see who supports our issues,’ but I think people really understand that it’s life and death,” says Ethan Todras-Whitehill, co-founder and executive director of Swing Left. “We can’t afford to be choosy here.”

Progressive organizations say the health care vote energized supporters. Run For Something, an organization started after the 2016 election to encourage young people to run for office, usually gets around 20 sign-ups per day, but got three times that many after the AHCA was passed. The Democratic Congressional Campaign Committee has launched a slew of ads on Facebook and Instagram targeting 30 Republicans who voted for the bill. Local groups are doubling down on their efforts: an Indivisible group in Rep. John Faso (R-NY)’s Hudson Valley district has already assembled 500 volunteers for a voter registration drive this weekend, according to organizers.

Leanna Brand, a professional singer and leader of Indivisible Simi Valley, says Rep. Steve Knight (R-CA) told his constituents that he wouldn’t vote for anything that would affect the ACA’s pre-existing conditions clause, or for any bill without letting his constituents see it. Brand says Knight broke both of those promises. So she and her group are intensifying their efforts. They’ve written letters to the editor in every local newspaper, they’re registering new voters at local high schools, and even considering buying a billboard to “call him out as the liar that he is.”

“He lied to his constituents twice,” says Brand, “and we’re going to use it against him.” Knight’s district is among those The Cook Political Report reclassified from “lean Republican” to “tossup.” Brand is so energized that she’s considering running against him herself.

In another California swing district, protesters have gathered outside Republican Darrell Issa’s office every Tuesday since President Trump’s inauguration. Those demonstrations, which usually draw 300 to 700 people, according to Lisa Margolin-Feher, leader of a local Indivisible group, were supposed to stop after the first 100 days. Now activists plan to continue to gather indefinitely.

“We will never, ever forget this vote,” says Margolin-Feher. “There is more energy now than ever.” 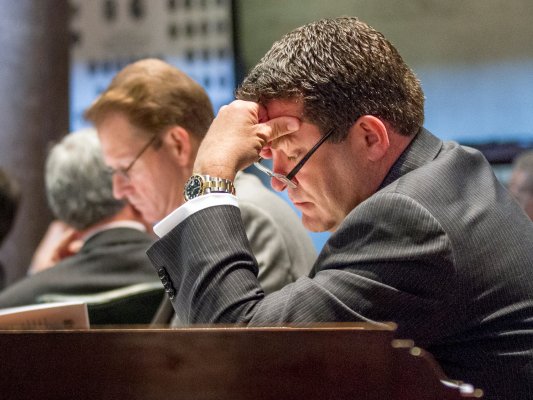