China Is Trying to Bar Taiwan From the World's Top Health Summit. The Consequences Could Be Deadly

A group of Taiwanese wear face masks to protect themselves against infection from Severe Acute Respiratory Syndrome (SARS) while praying at Hsing Tien Kung Taoist temple in Taipei, in this file photo from May 18 2003.
PATRICK LIN—AFP/Getty Images
By Nicola Smith / Taipei

Taipei has threatened to gate-crash the World Health Assembly’s annual meeting in Geneva this month, after a raucous Chinese protest saw the Taiwanese delegation humiliatingly ejected from an international diamond congress in Australia on Monday.

Australia has complained to the Chinese ambassador about an “extraordinary” disruption to the Kimberley Process conference’s opening ceremony in Perth, which saw China’s delegates grab a microphone and loudly protest Taiwan’s presence in the room.

The outburst was described as “disgusting” by an Australian official, but Taiwan was still sent home. The incident fits a growing pattern of attempts by Beijing, which views Taiwan as a renegade province, to squeeze Taipei out of the international arena.

Taiwan is now bracing for another blow if it does not receive an official invitation to the World Health Assembly (WHA), the world’s highest health policy setting body, before the close of registration on Monday.

Health minister, Chen Shih-chung, has pledged to send a delegation to the May 22-31 meeting whether invited or not.

Experts warn that Taiwan’s exclusion from the assembly, the decision-making body of the World Health Organisation, creates a “dangerous” public health risk for East Asia and beyond.

“It’s health apartheid,” charges Lo Chih-cheng, a legislator with the ruling Democratic Progressive Party. “Disease knows no borders and what happens in other countries clearly impacts on Taiwan and the other way round. It’s a lose-lose situation,” he argues.

“Taiwan is the only country to have been left out from this international health community…the reason for the exclusion is purely a political objection on the part of Beijing,” Lo says.

The WHO has been silent over whether Taiwan will retain the “observer” status to the WHA that it has been granted every year since 2009, allowing it to participate in the global fight against pandemics and disease. Inquiries from TIME to the body’s Geneva secretariat have gone unanswered.

Taiwan’s President Tsai has been forced down the unconventional route of using Twitter and YouTube to lobby for her country’s attendance.

“Taiwan should not be excluded from WHA this year for any reason. Health issues don’t stop at border and Taiwan’s role is impt to global health,” she wrote as one of an unusual splurge of eight tweets on this issue this week.

“Taiwan provides medical assistance to millions of patients around the world,” she said on Wednesday, linking to an emotive two minute YouTube video showing images of Taiwanese doctors providing humanitarian medical assistance in Africa, with the sign-off “WHO cares, TAIWAN cares.”

In an interview with Reuters last week Tsai said Taiwan’s ability to attend the WHA would be a key indicator of the development of cross-Taiwan Strait relations, and urged China to avoid counterproductive policies.

China’s efforts to pressure foreign governments to renounce diplomatic recognition of Taiwan have intensified over Tsai’s refusal to publicly endorse Beijing’s view that the self-governed island and the mainland are part of a single Chinese nation.

But for Dr Wang Pi-sheng, secretary general of the Taiwan Medical Association, the country’s participation in the WHA is not a question of politics, but of practical and medical common sense.

Taiwan’s health system is considered to be world-class — even a global leader in some specializations like cardiac arrhythmia and liver transplants. “We want to share our resources and information,” Dr Wang tells TIME.

But including Taiwan in global health plans is also a question of public safety, he argues.

“It’s about the epidemic protection network. We don’t want any gap from this network because now we have some new viral epidemic diseases,” he says. “If we are absent you will have a so-called critical gap.”

The regular wearing of face-masks on Taiwanese streets is an outward sign that the public’s memory is still scarred by a 2003 outbreak of Severe Acute Respiratory Syndrome [SARS], which killed 37 in Taiwan, as well as 349 in China and 299 in Hong Kong.

Many Taiwanese felt abandoned by the international community at the time. “We asked for help from the WHO and they denied us because we were not a member, or even an observer,” claims Wang.

He later added that the WHO sent two officials after four requests from Taipei, claiming it had taken the WHO two months to do so and that the officials refused to meet with Taiwan’s health minister. The WHO did not respond to the allegation that they had denied assistance.

“It’s not the first time that China puts politics ahead of the public good,” says Michael Cole, a Taipei-based political analyst, of the current situation with the WHA.

“If you create a blindspot by excluding Taiwan from all of these organizations, it puts lives at risk, not only in Taiwan but in China, regionally and globally because germs and communicable diseases do not care one iota about China’s claims over Taiwan,” he says.

On Thursday, Canada became the latest country to support Taiwan’s bid to attend WHA talks this month, after Senator Peter Harder said that a “Taiwanese absence would be detrimental to global interests.”

James Moriarty, chairman of the American Institute in Taiwan — the de facto U.S. embassy as there are no formal diplomatic ties — also recently backed Taiwanese participation, according to local media reports.

Activists like Michael Tsai, a former defense minister and head of the Taiwan United Nations Alliance lobby group, argue that there should be no preconditions for joining a non-political international body.

“We appeal to international opinion, in good will, to help Taiwan join the WHO,” he says. “I really hope that many nations help the Taiwanese people to have their voices heard.” 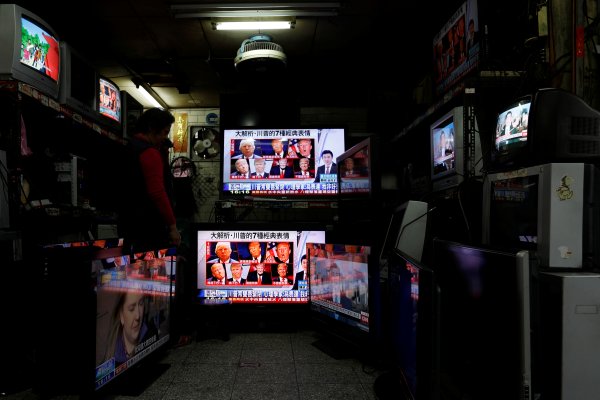 Taiwan to Teach Children How to Spot Fake News
Next Up: Editor's Pick