Nintendo fans may be laser-focused on the Switch, but the company hasn’t forgotten about its widely popular pure handheld consoles.

After recently unveiling the 2DS XL, Nintendo is about to release three new handheld games: Miitopia, Ever Oasis, and Hey! Pikmin. We tried each on the new 2DS XL, which arrives July 28 for $149.99. Here’s what we thought of each game and the handheld itself.

Between the 3DS XL, standard 3DS, and Switch, Nintendo has more options than ever when it comes to portable gaming. That can be a blessing and a curse, because along with all that choice comes plenty of confusion.

Here’s where the 2DS XL fits in: it has the same processing power and screen size as the most recent 3DS XL, but in a more compact build at a cheaper price. Nintendo is pitching it towards gamers who want something larger and faster than the standard 3DS and 2DS, but are willing to give up the 3D functionality to save a few bucks.

Nintendo has made some noteworthy ergonomic changes here, too. The stylus and cartridge ports have been moved to the bottom, and the game slot is now concealed. These changes could make it easier to find the stylus and prevent games from accidentally slipping out of the device. The borders around the display are also flush with the 2DS XL’s screen, giving a sleeker look. It could be a good option for Nintendo fans who want something larger than the 3DS but smaller than the Switch for gaming on the go.

Miitopia, which launches on July 28, is a bizarre-yet-delightful take on the Japanese role-playing game genre. In the game, monsters have stolen the faces of Nintendo’s Mii characters. Your job is to venture out and defeat enemies to return those faces to their rightful owners. It sounds unsettling, but it’s as funny and playful as you’d expect from Nintendo.

In terms of gameplay, Miitopia feels like a cross between Tomodachi Life and the Pokémon franchise. Success here depends on fostering your relationship with your companions, while the turn-based combat is very reminiscent of Pokémon. As a fun bonus, the Miis you’ve previously created star as the game’s main characters, which you can either build from scratch or port from games Miitomo or Tomodachi Life. (If you don’t have enough Miis to fill the game, it will autofill some for you).

During the game, players travel throughout various areas in Miitopia seeking out monsters and collecting items that help them along their journey. Characters travel in pairs: the main hero, which the player controls, and an ally. As with many RPGs, a character’s class determines which types of attacks and special moves they’ll be able to use in battle. If your companion happens to be a chef, for example, he or she can whip up some food to replenish your health.

Each quest begins and ends at an inn, where your characters can rest, buy new weapons and armor, or eat a meal to boost their stats. Feeding your Miis can be risky, however, since, giving them food they dislike will lower their stats.

One of the most satisfying aspects of the game is watching the camaraderie between your Miis build as they defeat monsters together. Even acts as minor as helping up your companion off the ground after tripping can improve your relationship as the game progresses.

Olimar and his pals are finally coming to the DS. Hey! Pikmin is the first game in the franchise to be available on Nintendo’s handheld consoles, and it’s the first new entrant in the series since Pikmin 3 debuted for the Wii U in 2013.

Many aspects of Hey! Pikmin, which hits stores on July 28, will feel familiar to longtime franchise fans. You’ll need to manipulate your tiny, brightly-colored buddies in interesting ways to complete puzzles, beat down enemies, and progress through the game, as with any other Pikmin title.

But Nintendo makes heavy use of the handheld’s touchscreen right off the bat in this version. Other than using the directional pad to move, much of the action requires tapping on the screen. You can do this with your finger or the stylus, but the latter is more precise. (The game is so touchscreen heavy, in fact, that it becomes apparent a Pikmin game would work well on a smartphone).

The other crucial element here is that the action is spread across both of the DS’ screens. While many games will use one display for the main gameplay and the other for a secondary feature like a world map or action menu, Hey! Pikmin’s levels are evenly distributed across both. This means players would be wise to keep an eye on the top screen as Olimar strolls along the bottom, since enemies may randomly drop down, or your Pikmin may stray out of sight.

Mixing of action, adventure, and RPG elements, Ever Oasis is likely to appeal to gamers who enjoy titles like The Legend of Zelda and Animal Crossing. It launches on June 23.

The main character, Tethu, is tasked with building a prosperous oasis while also fending off the villainous Chaos entity looming over the desert. It’s largely an action-adventure game, but it borrows some elements from the life simulator genre. While much of the gameplay involves exploring new areas and fending off enemies with melee combat, a crucial portion of the game also entails cultivating your own oasis by building shops and attracting residents.

There’s also a hint of strategy involved: at night, for example, enemies become more difficult to defeat, so you may want to time your quests wisely. An unassuming fox might attack your character during the day, while you’re likely to encounter intimidating serpents at night. The melee controls are smooth and straightforward, with buttons for executing an overhead strike or a lower blow available on the action button pad. Paying attention to the wisdom of the villagers is also crucial, because there’s a good chance you’ll need their help later on. If a character tells you she’s good at digging, for instance, that skill will probably be required to complete an upcoming puzzle. 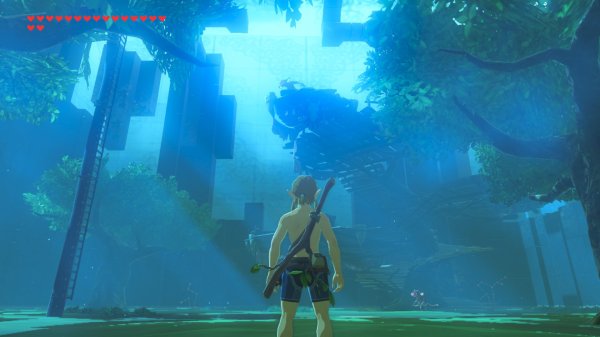 Not Finishing 'The Legend of Zelda: Breath of the Wild' Just Got Easier
Next Up: Editor's Pick